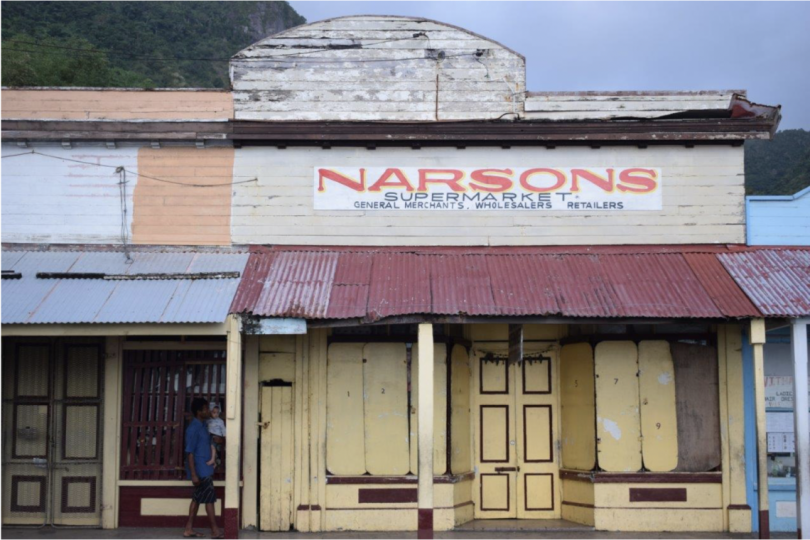 Levuka, Fiji’s original colonial era capital on the island of Ovalau in Lomaiviti Province, was inscribed as a UNESCO World Heritage site in 2013. At the time it was the seventh World Heritage site in the small island developing states of the Pacific, a region still remarkably under-represented in terms of World Heritage (home to only eight of the globe’s 1,121 World Heritage sites). Levuka Historical Port Town is viewed as an “outstanding example of late 19th century Pacific port settlements”. Listing was the culmination of at least 36 years of effort by various domestic and international stakeholders. It remains Fiji’s only current World Heritage site (there are others on a tentative list including the Sigatoka Sand Dunes, Sovi Basin, and Yaduataba Crested Iguana Sanctuary). Increased prospects for tourism, identified as early as 2000, have been seen as key justification for listing, alongside the inherent heritage protection values. At listing, the town’s colonial era buildings, many wooden, were seen as “remarkably intact”. 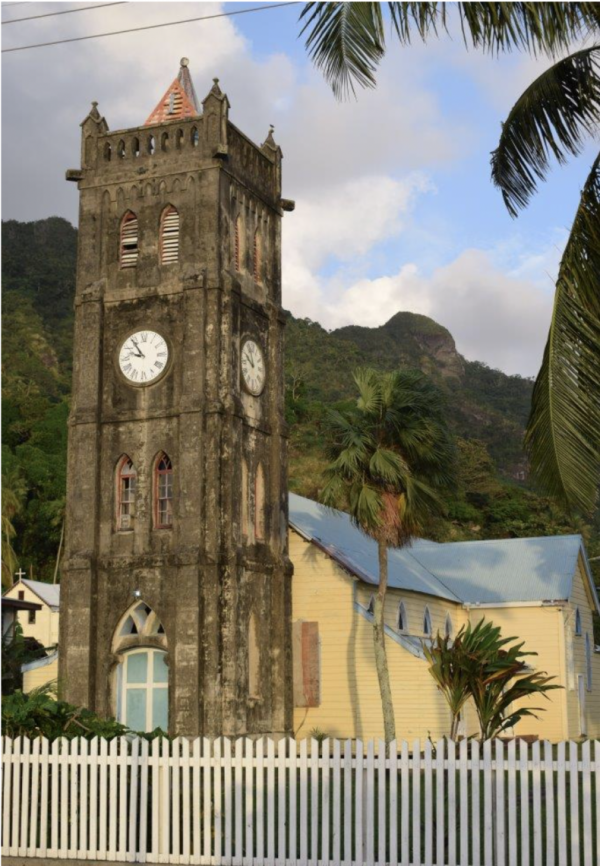 Levuka has always been a diverse, complex and conflicted place. UNESCO notes that the town “illustrates the cultural hybridity of non-settler communities in the Pacific, with an urban plan that merges local settlement traditions with colonial standards.”  European sandalwood traders began calling in at Levuka from about 1806. From the early 1860s, in an unruly period, European settlers began arriving in greater numbers. At Levuka in 1874, the Deed of Session was signed, making Fiji a British colony. The first indentured labourers from India – as the beginning of the girmit – also disembarked at Levuka in 1879. The Fiji Times, a newspaper still published, was started in Levuka in 1869. The town was also the site of Fiji’s first bank, post office, school, private member’s club, hospital, town hall, and public electricity system. The Royal Hotel, reportedly the oldest continually operating hotel in the Pacific, is wonderfully atmospheric. And in an often forgotten aspect of Fiji’s past, a ‘Melanesian’ settlement, Baba, settled by Solomon Islander plantation labourers and their descendants, is a prominent part of the town’s urban landscape. 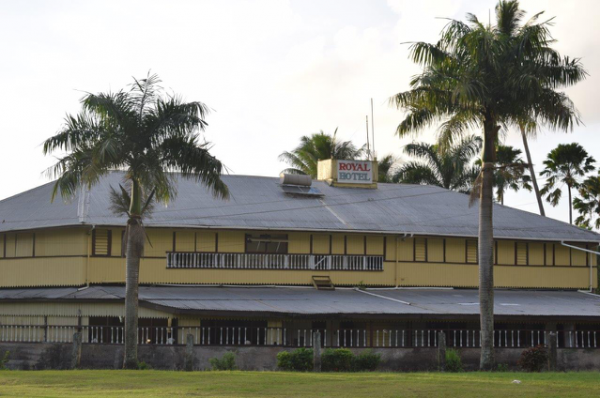 But Levuka, even after the capital moved to Suva in 1882, continues to be associated with European colonial traditions. In short, as the Pacific urban historical scholars John Connell and John Lea have argued about colonial era Pacific towns, Levuka was a classic example of a European place of work, play and residence where indigenous populations only had a very tenuous connection. This has created lingering effects for heritage conservation today. In a visit to Suva and Levuka in July to discuss heritage matters, for example, one interlocutor mentioned to me that “iTaukei [indigenous Fijians] see it as a colonial place … [and] … don’t put a [heritage] value to it”. Indeed as tourism scholar David Harrison has written, “recognition of and support for Levuka’s contribution to Fijian heritage is far from universal.” (emphasis in original). More specifically, Fisher (2000) has argued that indigenous Fijians and Europeans have two very different ways of thinking about Levuka’s heritage:

The first is that of the indigenous Fijians, for whom buildings and artefacts are of little consequence compared with the land…. The second is the language of the Europeans, both local and visitors, for whom buildings are the substance and structure of the writing, without which the meaning becomes obscured.

Levuka’s path to listing in 2013 was fraught with difficulty and disagreement. Efforts in the 1990s principally involved the National Trust of Fiji and the Fiji Museum. But it was not until 2006, when the Fiji Government sent their first formal representation to the annual World Heritage Committee meeting, that the Government began to drive the process – setting up a World Heritage Unit within the Ministry of Education, Heritage and Arts and a National Committee for World Heritage. However, all along the process to listing was top down, with a lack of consensus evident, particularly among Ovalau’s iTaukei. It was mentioned to me, for example, that there were even problems between different stakeholders in identifying and agreeing on the site’s Outstanding Universal Value. In 2019 a long planned National Heritage Bill remains to be passed. 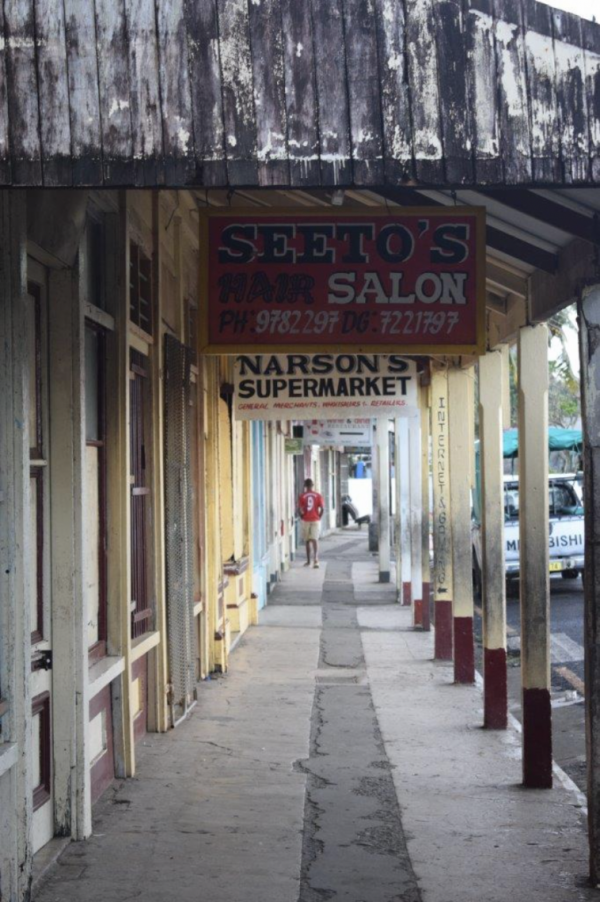 And what of the listing’s effect on tourism? Good data isn’t readily available, but most people I talked to in my visit were generally unenthusiastic, if pessimistic, about tourism impacts and prospects. Some argued that increased or more targeted marketing of Levuka by Tourism Fiji would help (there’s currently very little focus on Levuka’s historical heritage on their website or other Tourism Fiji promotional material; although I’m told there was higher profile in the past). What’s clear is that only a small number of tourists are visiting. Certainly, reflecting experience elsewhere in the Pacific such as in East Rennell, World Heritage listing is not a hot ticket to a tourism bonanza.

In 2016, category five Cyclone Winston caused significant damage to Levuka, Ovalau, and across Fiji. In Levuka five historic buildings were completely destroyed, 13 buildings lost roofs, and 20 others needed repairs. People reported to me that the town’s post-cyclone rebuild has been complicated by heritage provisions in the Levuka Town Planning Scheme. For example, damaged wooden heritage-listed buildings were said to need specially sawn timber – hard to source – to match the original wide planks of Oregon pine imported from the United States in Levuka’s early days. Government grants of up to FJ$5,000 per building were subsequently made available to support repairs depending on damage assessments – although people reported to me that rebuilds and repairs have been stymied by a lack of specialist human resources in Levuka such as engineers, town planners, and conservation architects. There remains lingering frustration with a perceived lack of government attention and financial provision to support the rebuild of heritage buildings and the added real or perceived complication of heritage provisions (although regulations to allow for things like paint colour variations and extensions to buildings). 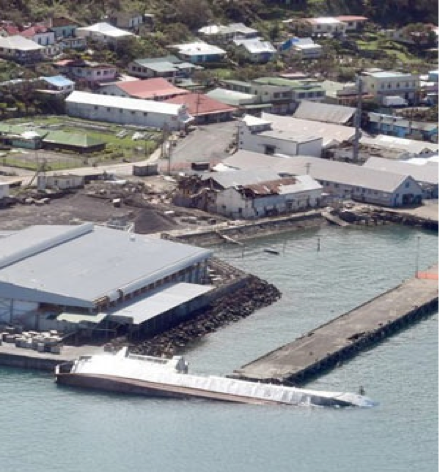 Overall, a lack of significant tourism impact and heritage complications in the post-Winston era has strained some support for Levuka’s heritage listing. Indeed, there has been suggestions that Levuka could be at risk of losing its World Heritage status (the first step would be moving Levuka to the list of World Heritage in Danger, where it would join the other Pacific World Heritage sites of East Rennell and Nan Madol: Ceremonial Centre of Eastern Micronesia). My sense is that this is probably unlikely. But fundamental tensions linger – especially different perceptions on heritage values from iTaukei in particular. One heritage interlocutor mentioned to me that “there is a good story of Levuka, and it is a story of resilience.” However, that same person was very conscious of the town’s fraught and fractured history and heritage: “there is a restless spirit in that town …. for the town to prosper I feel like the community needs to find its peace.” Perhaps more explicit recognition of the area’s iTaukei history and heritage may help?