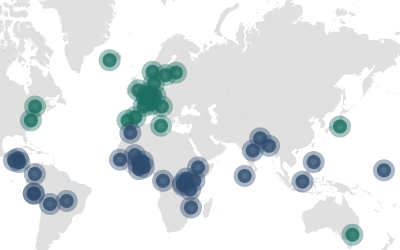 Developing countries have consistently called for transparency in the delivery of fast-start climate finance that developed countries committed last year for the period 2010-12.

Indian environment minister Jairam Ramesh sums up the view: “We need to sit down and have an honest accounting of the US$30 billion … Where is it coming from? How is it being used? Where is it going?”

Reports released by contributing countries for the current UN climate conference in Cancún are starting to provide a clearer picture, but their variability highlights the need for greater transparency and consistency in future reporting to build trust between contributors and recipients.

How much information is out there? For much of the year detailed information about allocations of fast-start finance has been fairly thin on the ground. Some contributing countries jointly released some initial information in June (not available online), and several useful analyses (e.g. by Project Catalyst, WRI and ODI) have pieced together material as it trickled out. Recent estimates have confirmed that of the collective commitment to provide a figure approaching US$30 billion in individual pledges have been made.

In the lead-up to Cancún, some official efforts to consolidate figures began to emerge, beginning with a website led by the Netherlands (faststartfinance.org). The Cancún conference has seen a flurry of further information coming out, including glossy reports by the two of the three largest individual contributors (the EU and the US), and most recently Australia. Japan, the largest contributor, which has pledged about half of global fast-start finance, has produced the briefest information – essentially a fact sheet. 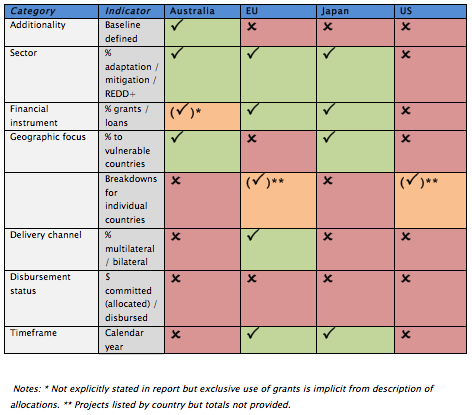 A transparency snapshot. This table provides a rough overview of how countries’ reports rate in terms of their reporting on key issues of interest to the climate finance negotiations. Rather than seeking to evaluate the appropriateness of actual allocations, the snapshot simply indicates whether parties are providing enough data to enable informed analysis.

Is the funding ‘new and additional’? While countries undertook to make ‘new and additional’ fast-start commitments, they did so without an agreed definition of how diversion of aid flows would be avoided. As a useful recent working paper has highlighted, countries’ specific measures or baselines for additionality are so divergent that in some instances a country’s commitment could range from being fully additional to not additional at all depending on which measure is used. EU member states could not agree on a common measure of additionality, and the US and Japan reports are silent on the issue. Australia indicates that its funding is coming from a growing aid budget and does not displace funding for existing programs (although since the projected increase in aid was announced before fast-start pledges were made, this may not satisfy the more stringent criteria preferred by many developing countries).

How much is being allocated to mitigation and adaptation? The Copenhagen Accord calls for ‘balanced’ allocation between mitigation and adaptation. Although there is no agreement on whether balance requires an equal split between the two categories, the proportion currently allocated to adaptation globally (possibly as little as 10-16%,  according to one analysis done before Cancún) seems to require adjustment on just about any reasonable interpretation of balance. The global trend is influenced to a significant degree by the overwhelming focus of Japan’s contribution on mitigation (around 90%). The EU has allocated around a third of its funding to adaptation, while Australia’s adaptation share is among the highest of all contributing countries at over half.

How much is being allocated to grants and loans? Many developing countries have argued that finance should be delivered in the form of grants rather than loans, particularly for adaptation, which they consider to be a remedy for harm caused principally by developed countries’ emissions. Analysis by Project Catalyst earlier this year suggested that the ratio of grants to loans for global fast-start finance was around two to one. Loans count for more than half of total EU funding, and just under half for Japan, while Australia’s contribution is exclusively in the form of grants. For reporting purposes, it would be best if loans were accounted for both on the basis of their gross value and their ‘grant equivalence’ (e.g. a highly concessional loan may be equivalent to a grant of 90% of the face value of the loan).

Is the money actually being delivered? Most of the reports list a smorgasbord of activities currently being funded, but there is little clarity about how much of the funding has actually reached developing countries. For example, Japan indicates that almost half of its US$15 billion contribution has been ‘implemented’, although it is unclear whether this means actually spent or merely earmarked for specific projects. While Australia refers to several initiatives that are already active on the ground (including the International Forest Carbon Initiative), the focus of the report is on allocations rather than achievements. Clearly it is not in anyone’s interest to rush money out the door without proper planning and consultation, but by the next round of reports contributors will need to demonstrate more clearly that their pledges are being translated into concrete results. One example would be to report, as the UK expects to do, on estimated emissions reduced by the mitigation activities it supports.

Implications for the negotiations. The reports released to date are a welcome advance on the scant information that has been available to date, and some individual reports (notably that of the EU) provide a useful level of both synthesis and detail. However, the variability of the reports frustrates attempts to draw comparisons or identify global trends.

Some of the shortcomings highlighted here reflect systemic issues in aid reporting, such as using fiscal years that do not match calendar years, and distinguishing allocations from disbursements. But there is clear potential for contributing countries to improve the consistency and comprehensiveness of their reporting on fast-start finance. Even if improved reporting requirements cannot be agreed under the UNFCCC at the Cancún conference (as recommended in a previous post), contributing countries should agree on a set of voluntary guidelines for their 2011 and 2012 reporting that meet at a minimum the criteria outlined in the snapshot above.

Concurrently, developing countries will need to establish robust monitoring and reporting systems for how the support they receive is being used. Taken together, these measures should help ensure that we begin to get a clearer picture of how fast-start finance is being allocated and what sorts of impacts it has. In this way trust can be built among contributing and recipient countries on the importance of sustaining the vital climate financing partnership.

Jonathan Pickering is a Research Associate with the Development Policy Centre at the Crawford School, and a PhD student working on climate and development ethics based in the Centre for Applied Philosophy and Public Ethics (CAPPE).

Jonathan Pickering is a Postdoctoral Fellow at the Centre for Deliberative Democracy and Global Governance at the University of Canberra and Visiting Fellow at the Development Policy Centre. He completed his PhD thesis (on climate change financing for developing countries) at ANU in 2013. Previously he worked at AusAID (2003-09).