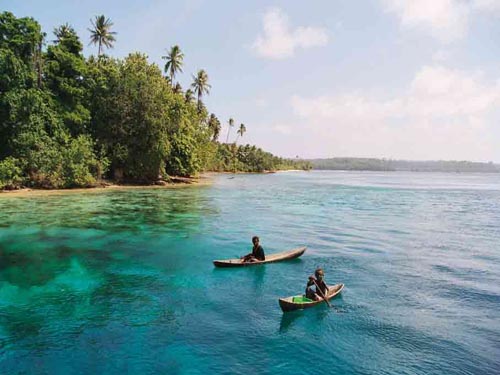 The Regional Mission to Solomon Islands (RAMSI) helped create a platform for reform, improved governance and renewed economic growth after intervening in the civil unrest and lawlessness caused by ethnic tensions in Solomon Islands between 1998 and 2003.

Despite strong growth in recent years, Solomon Islands economy remains fragile. How do the institutions of government, the political environment and the political system influence each other, and what does that relationship mean for reform and development in Solomon Islands?

First, the challenge of generating political will to drive reform. In our political landscape, where the only certainty is uncertainty itself, pursuing a reform agenda is a big goal. We need to deal with many players and a broad range of interests, which do not always remain constant. It is putting it mildly to say that political consensus can be difficult to achieve. Even reforms that are in the national interest and beneficial to the country can be hard to pursue if they are not viewed as directly relevant to the majority of voters, either by MPs or by voters themselves.

Second, the challenge of the competing priorities of MPs: those of their constituencies and those of the nation. MPs come under considerable pressure to deliver services within their constituencies. This can mean that more time and resources is spent responding to those needs ahead of the national interest, and may also increase the difficulty of achieving support for reform.

Third, the challenge of political interference in decision-making. Examples of this are the decision-making process around how public institutions are staffed and led, and what they deliver, and around government policy and finances. Political interference can lead to poor outcomes and lost opportunities at both a community and economy-wide level. This challenge is often raised with respect to state-owned enterprises, but it is even more applicable in the wider public service, and is a particular issue in the appointment of departmental CEOs.

Managing the Challenges in the Political Economy

The arrival of RAMSI in 2003 and its assistance to the Government in the implementation of significant reforms was a great opportunity for us. Successive governments have taken advantage of this assistance and the resultant stability to make fundamental changes that helped guide the reform agenda and manage the challenges outlined above. The persistent effort by a few national and international agencies made sure these reforms were slowly but surely pursued. The ‘Core Economic Working Group’, which continues to be one of the drivers of our reforms program, is a good example of this.

This is not to suggest that the situation has improved overnight, there is much that is yet to be done. However, if the Government continues to manage the economy well and ensure the benefits of growth are widely enjoyed, these reforms can sustain an enabling environment for ongoing growth.

There are two areas where recent reforms are helping the Government manage the challenges identified above.

The Government has implemented a number of reforms to its budget process, particularly, to improve information made available to the public. The Medium Term Fiscal Strategy is released to enhance public understanding of the context in which the Government makes fiscal decisions. Budget papers are all publicly released, including a Budget Strategy and Outlook document detailing fiscal decisions and their underlying policy assumptions.

This enables the public to understand why the Government has made specific decisions, and it can assist MPs in explaining those decisions to their constituents. It also means that MPs and Ministers can be held to account: if we fail to deliver on promises, citizens can ask for an explanation.

The Government is also deeply committed to public consultations on significant policy issues and changes.  This helps us to make better policy by taking practical matters into account.  More importantly, it deepens stakeholder understanding of the Government’s position in policy areas, and how such policies might benefit the community. This is particularly important if a decision might make some people worse off in the first instance or be perceived as making some people worse off.

Over time, a deeper understanding should help to improve community appreciation of the national interest, which in turn should help us to build broad political support for reform and development among political leaders.

Managing political interference is an extremely difficult area as Government decisions about policies and institutions can be driven by political motivations.  Such motivation can lead to inefficient outcomes and lost opportunities for the community and the economy.

A common area for political interference is in the appointment of Boards and other aspects of governance in public institutions.  This is a matter of concern regarding state-owned enterprises, where directors are sometimes appointed for reasons other than their skills and experience. The State Owned Enterprises Act 2007 put a number of arrangements in place to improve the appointment process. Under this Act enabling regulations provide guidance on qualifications for appointments and the process for appointment-making, which includes advertising of vacant positions, specific qualification criteria, and the public announcement of appointments.

The Government is also pursuing budget reforms to improve the decision-making process at the very centre of government by undertaking more robust public consultations. This will not only help the Government to make decisions and organise priorities in the national interest, but also to ensure transparency. In time, decisions on the allocation of resources will not only be in the national interest but will also be protected from political motivations.

In recent years we have increased our engagement with the community on budget priorities and allocations, in particular with civil society, and this has been expanded upon to include consultations with provincial leaders.

Significant improvements have been made in the documentation of the Government Budget. The Government’s policy objectives are set out in the national development strategy and, in the 2012 Budget, these objectives were explicitly linked to budget decisions and provided guidance in making Government decisions.

In mid-2013 the RAMSI program will enter a transition period. As we prepare to go through this phase it is vital that we maintain a stable political and economic environment. Maintaining law and order is crucial to this, as is continuing to improve the way our public institutions function. In many of these areas we will continue to need the support of our development partners, and we must continue to make the best use of that support.

That said, there are a range of areas in which we must achieve reform ourselves, and this goes to the heart of our democracy. Like my fellow country men and women, I wish to ensure that the gains we have made provide a sound platform for future gains, which will encourage economic growth and result in improved standards of living for all our people.

Rick Hou is a Solomon Islands politician and the current Minister of Finance. Prior to entering politics he served as Governor of Solomon Islands Central Bank before becoming Senior Adviser to the Executive Director of the World Bank. This is an edited version of a presentation Mr Hou gave at an Asia and The Pacific Policy Studies roundtable on “[t]he implications for development of political processes and institutions in the Pacific”, at the ANU on September 6, 2012. The rest of the series can be found here.

Rick Hou is a Solomon Islands politician and the current Minister of Finance. Prior to entering politics he served as Governor of Solomon Islands Central Bank before becoming Senior Adviser to the Executive Director of the World Bank.