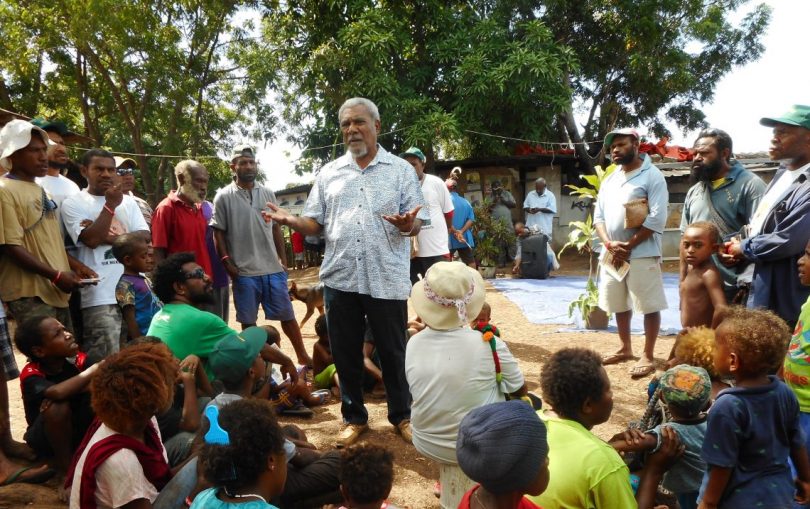 Mekere Morauta talking to the Fayantina community in Port Moresby

I will not use the time we have together today to dwell on the sadness of what we have lost and what we will miss forever.

It is time to reflect on what we have learned from a full life lived well.

The life of a good and great man.

A good man who spent his whole adult life thinking about and working towards what could be made better for his country.

A great man, who showed Papua New Guineans that governance as solid as humans have made anywhere could be sculpted in their beautiful and troubled land.

A man of strategic purpose and intent, who thought ahead, and made each move knowing what would come next as well as can be known.

A man of strong will, who never gave up on anything worth doing.

A generous man; who knew that all people had faults as well as strengths, and that we can use the strengths in everyone if we build protection against their faults.

A Papuan villager, who never forgot the joys of bare feet on wet boards of canoe and boat, sand between the toes, and live fish straight from the river and the sea; who died listening to the recording of Toaripi hymns sung by his cousin sisters, and of Ivore, the traditional songs unique to Mekere’s Savora Ipi clan of the Toaripi Tribe, sung for him by his two surviving aunts, Moreare and Kauoti Hasu.

Mekere Morauta was born in the village of Kukipi, on the beach where the Lakekamu and Tauri Rivers reach the sea. Where you travel by canoe or stay at home. Home near the water. Place of sago and fish. Coconuts near the beach. Pineapples, buai, bananas and some tubers on each pocket handkerchief of sand that lifts its back above the swamp.

Then to Sogeri Senior High School in the hills behind Port Moresby. One of the first high school students, after Paul Hasluck’s well-intentioned but misguided egalitarianism was put aside to allow the preparation of some Papua New Guineans for the high responsibility that would come with Independence. “Independence by 2000 if ever,” said Hasluck’s successor in 1969.

Mekere was one of a small group from Sogeri and Kerevat who joined the University of Papua New Guinea’s first year in 1966. They were so few and so late that at Papua New Guinea’s independence there were less graduates compared to population than in the neglected Belgian Congo. But what a few they were; that happy few, that band of brothers. And what a difference they made.

Mekere was the most conscientious and best student of economics in the early years of the University. His Professor, Anthony Clunies Ross, made arrangements for him to spend a year at Flinders University in Adelaide. Other friends at that time passed economics and graduated on time only because of Mekere’s notes and cramming lessons in the three weeks before exams.

Mekere was the first graduate in economics from the University of Papua New Guinea in 1971. He was soon appointed Deputy Secretary for the Department of Finance—the Department at first without the financial and economic policy functions that were in the Departments of External Territories and Treasury in Canberra. After Self Government in 1973, Mekere at age 27 was appointed to the most demanding public service job in a new country: Secretary for Finance, covering the functions of both Finance and Treasury in the Australian and contemporary Papua New Guinean systems. Policy capacity had to be built from the foundations.

From the beginning there was steadiness under great pressure. Wisdom, especially about the complexity of human motivation. Sure-minded judgement of human character. The strategic approach to every problem; recognising that no matter how well things were going they could go wrong; no matter how bad things were they could get better or worse; and that while there was a chance of a way out of an impasse, one worked through the best way of finding it and following it through to a chance of success. Finding the best people to do the things that had to be done. And then steadfastly holding to the chosen course, whatever the buffeting from outrageous fortune.

The macro-economic policies and the Department through which Mekere built them gave PNG a decade and a half of economic stability, within which the young democracy was given the chance to grow.

Professor Sir John Crawford, then Chancellor of The Australian National University, frequent visitor to PNG as Chairman of the PNG Development Bank and Chancellor of the University of Papua New Guinea in those distant days, once said to Mekere: “What you have built is too good to last. I hope you are not disappointed when those who follow can’t do so well.”

A year after Mekere entered the Parliament, in 1998, he and Sir Rabbie Namaliu together watched a 4 Corners programme on the ABC in which an inebriated PNG Prime Minister boasted of multifarious abuses of the power of the Papua New Guinea state. The two friends had chosen to sit together in Opposition to a bad Prime Minister. Now they decided that their country’s peril required them to join the Government and to do what they could to save the country.

Tony Siaguru described Mekere as “Papua New Guinea’s reform Prime Minister”. He inherited public and financial sectors riddled with corruption and a bankrupt national economy. He systematically cleaned it up. New central bank and bank regulatory legislation to restore convertibility of the currency; new laws to restore integrity to the national superannuation fund; a reshaping of national finances to allow teachers and aid post orderlies to be paid. Privatisation of the Papua New Guinea Banking Corporation to save it from corrupt political interference. The establishment of the Independent Public Business Corporation to allow professional management separate from corrupt political influence in state-owned businesses—and to privatise them if the circumstances were right. In agreement with BHP, establishment of independent institutions to manage the Ok Tedi mine after BHP’s departure, and of governance arrangements that would protect large income from the mine for sustainable development. And constitutional change that led to PNG’s first full-term government in the Parliament elected in 2002.

Mekere’s achievements as Prime Minister after the Skate chaos were of historic dimension. The constitutional changes in particular still help. But there was not time to make all the difference Mekere had in mind, or to bed down for all time some of the reforms.

From the beginning and more than ever as time passed, much of Mekere’s rare talents in managing hard things was devoured by resistance to the plundering of the state. Regrettably it devoured so much time; but mercifully he was there to do it and to show others what is possible.

Mekere never gave up. One COVID blessing is that Jayne and I were in central western Queensland through most of Mekere’s last months and able to travel to Brisbane. Speech was a struggle. Mekere would sound the words that defined the thoughts of that teeming mind. Things were bad in his country. He outlined what had the best chance of improving things.

We can look at the life and death of Mekere and fear for his country’s prospects. He wanted so much an effective Papua New Guinean democracy, with broadly based prosperity. He worked so hard for so long to make it happen. All of his goodness, his greatness, his wisdom, his strategic purpose, his strength of will, his generosity, and his patriotism. His work is done and Papua New Guinea is not doing as well as he would want.

If Mekere could not make it work, who could?

What hope for his country?

But there is a better way to see what he has left.

One man, with some friends and often alone, achieved so much. What could be made if many took up his vision and his work? If many people worked together and helped?

What if we all look at Mekere’s life and the things that he built and which worked well for a while; and resolved to do as much as our slim talents might allow?

What if we all care half as much as Mekere did, and use our own small talents to rebuild a coconut trunk stump, or Kwila window sill, or taun upright, or sago palm corner of a roof?

What if we decide as Mekere would have done, and refuse to give up just because things seem so difficult now?

That is how I think of Mekere’s life, and now his death.

We can remember Mekere’s answer to John Crawford 44 years ago.

What he built was worth building though it might fall down, because it proved forever that it can be built.

This is an extract from the eulogy delivered by Ross Garnaut at the funeral of Sir Mekere Morauta at St Mary’s Church, Kangaroo Point, Brisbane, on 23 December 2020. The full text is available here.

Professor Ross Garnaut AO is a Professorial Research Fellow in Economics at The University of Melbourne.