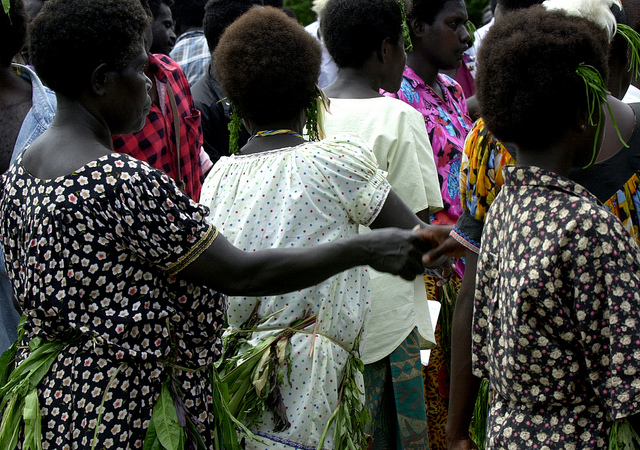 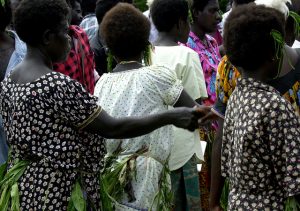 For all that has been written about it, the Bougainville Crisis risks becoming obscure in plain sight. The lack of a general history makes understanding the conflict a daunting prospect for the beginner, and the more specialised literature usually assumes a very great deal of knowledge about Papua New Guinean politics and history and about the anthropology of Bougainville. Moreover, the factionalisation so characteristic of the conflict itself was also characteristic of its representation outside Bougainville. Journalistic accounts from the period are thus often partisan. Papua New Guinea’s strategy of laying siege to the island, establishing a blockade in March 1990 which lasted, in some form or another, for six years, meant that this initial wave of reportage was often as doubtful, and news about Bougainville were extremely difficult to come by. It is now 15 years since the Peace Agreement of 2001 brought a semblance of normality to the islands, but this is a ‘fragile peace’, as if often remarked in Bougainville. The understandable desire to care for and nurture this peace has, unfortunately, also led to unwillingness to write about the painful times.

Our surprising ignorance about one of the most high-profile conflict in the Pacific since World War II is nowhere deeper than in relation to social and political conditions in the period of government withdrawal and siege. And it is precisely this that Veronica Hatutasi’s new book Behind the Blockade, provides a glimpse of. It is not a general history, but rather a personal memoir. We read here, in often intimate terms, how the life of this young mother of four was upended by the crisis: Hatutasi begins ‘living in utopia in Toniva’, a village immediately south of Kieta, but her starting anecdote – her son comes into trouble with the Highlands crew of a PMV – sounds a foreboding note amidst the domestic idyll of children playing on the beach to the sound of 1980s pop and country music. It is not long before the cocktail of uneven development, landowner grievances and nationalist aspirations tears Hatutasi’s utopia apart.

Soon shots are being fired and PNG launches its unmeasured and brutal response; from there the spiral into conflict is inexorable. As the crisis envelops the island, we sense in the writer a growing engagement. When the blockade falls, the family relocates to Siwai: the amenities of town life are gone, and in page by page of Hatutasi’s narrative, the commodities, services and safety of her world exhaust themselves. The conversational prose almost masks the harrowing, ruthless process underway as society is stressed to a breaking point; food is exhausted, and Hatutasi digresses on the fact that her last batteries are maintaining the last clock in operation. Some digressions in the book are distracting, but this one, in which she notes her commitment to maintain time strikes me as deeply significant. A final piece of the former world is cultivated.

Over the next few chapters, we follow her as the situation continues to worsen. We meet peacemakers such as the Catholic priest Father Dario Monegatti, who offered himself in exchange for people accused of sorcery; we get a sense of growing polarisation and factionalisation as the conflict evolves into a fratricidal civil war amongst Bougainvilleans. We find little, but extremely significant facts, such as the continued functioning of a cash economy, the fearful reverence of Francis Ona, whose name becomes taboo, the subtle clues that suspicion has seeped into every fissure of the social fabric. There is much here for the historian, and the book fits into the budding literature of Melanesian women’s memoirs, the obvious precedent being the testimonials offered in Sirivi and Havini’s …As Mothers of the Land [pdf].

After two sections narrating the crisis, the third switches somewhat abruptly into a diary form to chronicle Hatutasi’s experience during what she dubs ‘the Crisis within the Crisis’ as Siwai factions turn on each other. This section is possibly of greatest value to historians, as it gives a sense of the forms of governance that were attempted in the vaccuum left behind the blocade. For the historian, it is also valuable as it makes Hatutasi’s position in the conflict increasingly evident – indeed, she emerges as an antagonist of the Bougainville Revolutionary Army (BRA), and in this respect her descriptions are usefully read along …As Mothers of the Land, as that book presents a more pro-BRA perspective. In Sirivi and Havini’s volume, the BRA commanders treat people in the areas they control responsibly; in Hatutasi’s those people are described as human shields. Ultimately, the blockade comes into view as established by PNG, but maintained by the BRA.

By August 1992, the family is evacuated to Port Moresby. Unfortunately, the last two sections of the book are not nearly as vivid as the first, and as Hatutasi comes to reflect on the Crisis, there isn’t much by the way of critical consideration of her own position within the conflict, or to what extent her knowledge of conditions in Bougainville is particular to her own experience. Hatutasi becomes a journalist for the sadly defunct Times of PNG, writing under the pseudonym Niko Numana. By now, Hatutasi is working to counter BRA ‘propaganda.’ I do not wish to impugn Hatutasi’s testimonial: it would be absurd to demand balance of a memoir. It is candid, moving, and it is essential reading for those interested in the conflict. But as the book moves into its final stages, it becomes less organised, and the omissions more serious: the life of Bougainvilleans in Port Moresby during the Crisis was not easy, but her account does not convey this as effectively as terse timekeeping of her diary, or the narrative of fall from idyll at the beginning. We learn nothing, for example, of the tense days of the Sandline crisis. Hatutasi is, by her own admission, writing from ‘the sideline’ here. The book concludes with a description of peace initiatives which is frankly superfluous. It is a somewhat unfortunate end to a personal and intriguing work.

It is impossible to greet the publication of a memoir such as this with anything but enthusiasm: Bougainvilleans are writing about the Crisis, Bougainvillean women are setting to paper their point of view. But I do want to add my own foreboding note on this occasion: this is a personal memoir and must be read as such. Reading the book as a historiography would do it a serious injustice. It does not have the academic machinery and careful fact-checking to satisfy a historian. I mean this not as a criticism of the book, but rather of the environment into which it is being launched. For want of accessible, general overviews, or for that matter systematic study of the Crisis’ social realities, Bougainville’s history is becoming obscure right before our eyes: and so, the context necessary to understand Hatutasi’s book is difficult to acquire, the significance of its digressions harder to notice to the uninitiated. It is nonetheless compelling. I hope a narrative such as that provided by Hatutasi, at least in the first three sections, compels more writers, especially Bougainvillean writers, to attend to the difficulty of their past, which is painful and conflicted, fragile and necessary.

Thiago Cintra Oppermann is a Research Fellow in the State, Society and Governance in Melanesia (SSGM) program at The Australian National University.

Thiago Cintra Oppermann is a Research Fellow with the State, Society and Governance in Melanesia (SSGM) program at ANU.