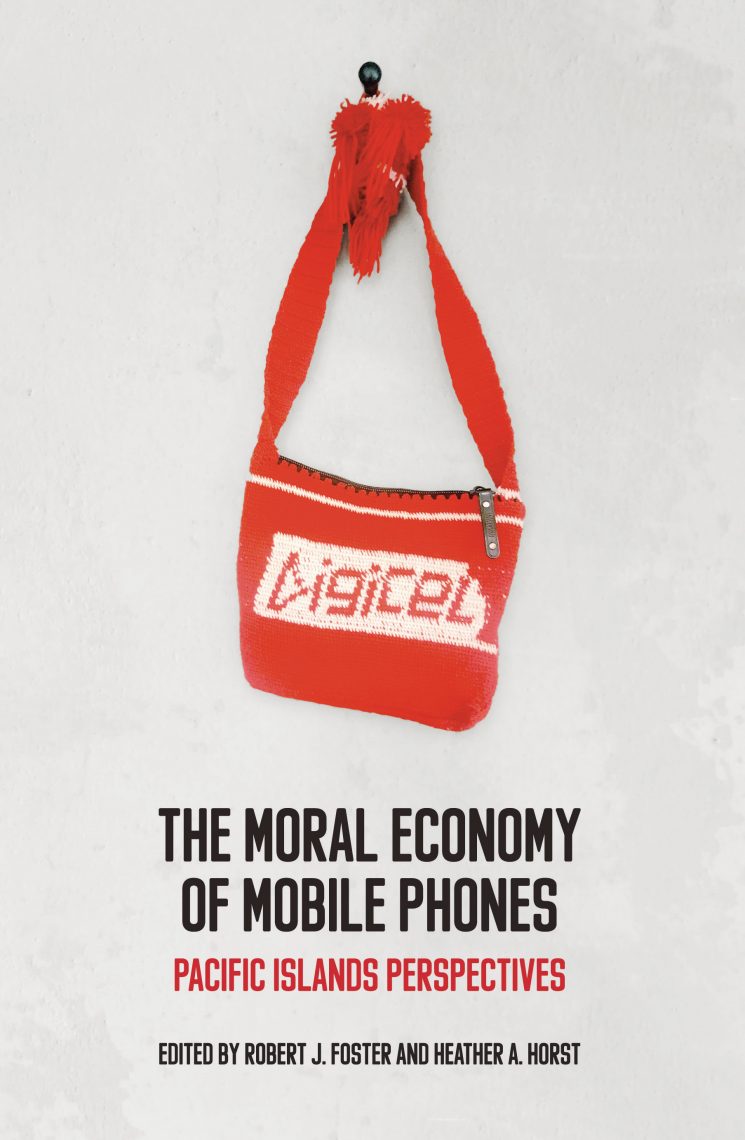 The moral economy of mobile phones: Pacific Islands perspectives is a collection edited by Robert J. Foster and Heather A. Horst. It presents anthropological research from the Pacific: primarily Papua New Guinea (PNG), but also Fiji and Vanuatu.

The book introduces the notion of a ‘moral economy’ consisting of intersecting relationships and interactions between mobile telecommunication companies, state authorities, and consumers. While much research on mobile phones tends to focus on individuals and how they access, use and perceive their mobile phones, the editors highlight the varied influences that can shape both the range of choices available to consumers and their subsequent behaviour. State authorities make (or do not make) regulatory decisions. Meanwhile, companies make business decisions, develop marketing strategies, produce advertising materials, design network coverage, and so on. The intersections between individuals, companies and the government make for a complex and fluid situation worthy of investigation.

David Lipset explains that in Darapap village, Murik Lakes, East Sepik Province, PNG, only one location has reliable mobile phone signal: a doorway in one family’s house. Thus, this one dependable phone hanging from a thread of string in an internal doorway in a private home is used like a communal phone. The phone is not thought of or used as a private asset. The phone acts as a link between urban and rural localities, allowing people in town to ring and leave messages for villagers they wish to reach.

Holly Wardlow presents the case of mobile phone use among women in Tari, Hela Province, PNG. In a context with limited electricity access, about two-thirds of Wardlow’s research participants have mobile phones. The technology enables wives living in their husbands’ villages to have contact with natal kin – this is a transformational change in people’s lives, also observed in rural India.

While the practice of dialling random phone numbers to find new ‘phone friends’ is the focus of the chapter, the interviewees had pre-existing relationships with most of their phone contacts. Of interest to me was the way that for some people God plays an important role in their technology-enabled relationships. In one notable case, a despairing, socially isolated, HIV positive woman dialled phone numbers in a handset she had been given and found one woman willing to listen to her. The ensuing friendship provided much emotional support for the initiator of the original phone call, who gratefully saw the second woman as an instrument of God.

Dan Jorgensen describes the history of mobile phone uptake in PNG. He provides a clear picture of how Digicel came to have such a large share of the market. Unfortunately, he uses an overestimation of the total number of mobile phone users in PNG sourced from the International Telecommunication Union whereas the actual number of users is much lower (for the latest figures go to this GSMA 2019 report, and see also this 2015 government report).

The chapter portrays a fascinating case of a PNG man for whom the establishment of mobile phone networks foretells a future apocalypse. The same man also acknowledges, however, that his mobile phone saved his life when he was sick and disoriented on a solo mountain hike. It would be of great interest to determine whether this man’s ambivalent, mixed views about mobile telephony are reflected in the wider population.

In Fiji, Digicel remains a small player, unlike in other countries where Digicel operates, including PNG. As Heather A. Horst explains, Digicel has emphasised ‘consumers’ in advertising about rural users, network size, and network quality. Competitor and dominant market player Vodafone has emphasised ‘citizens’ and their relationship with citizens as a Fijian company. Vodafone advertising features emotive motifs of Fijian identity, tradition and modernity. Nationalist sentiments incline Fijians to use Vodafone, rather than Digicel.

Daniela Kraemer’s chapter identifies young, poorly educated, unemployed men in Port Vila, Vanuatu as strategic users of mobile phones to advance their social standing. Random dialling is one common method of increasing one’s social network. The size of a young man’s contact list in his handheld device can indicate his status. These men have diminished connection to their rural roots and customary roles, as well as limited options for paid employment in the city. Exchange of mobile phone credit is important for them, and thus phone credit is valuable as an exchange item, rather than just for talk time or text messaging. Whether or not to give and how much to give signify the person’s opinion about the importance (or not) of a relationship. The practices are similar to how Jamaicans manage their mobile phone contact lists and relationships.

Robert J. Foster’s discussion of mobile phone use in PNG introduces the concepts of ‘personal discipline’, ‘time thrift’, and ‘fiscal responsibility’. Foster argues that, as the dominant provider Digicel offers pre-paid services along with varying bundles and specials, ‘discipline’ becomes an essential value and practice in how people manage data plans, text messaging bundles and so on. Concerned about the use of ‘time’ during mobile phone calls, one PNG citizen bemoaned the slow pace of speech of people from her coastal home province. A clear example of ‘fiscal responsibility’ is the way in which one person has opened a second bank account, as she was frequently using mobile banking linked to her first bank account to top up her mobile phone credit. Thus, she “safeguarded her money from herself”.

While the book ends with stimulating discussions by Jeffrey Mantz and Margaret Jolly, it seems to be missing a summary of how its disparate, fascinating stories of mobile phone companies and consumers across the Pacific link up to form a narrative about the ‘moral economy’. A concluding chapter synthesising the findings about its three components (consumers, companies and authorities) would be helpful for the reader.

Most chapters focus on mobile phone users. The chapters by the book’s editors focus on the pricing schemes and advertising campaigns of mobile telecommunication providers. However, this volume of anthropological research does not delve into regulatory or policy issues. Such a discussion of the role of the authorities could perhaps have been in an additional chapter.

The moral economy of mobile phones: Pacific Islands perspectives, edited by Robert J. Foster and Heather A. Horst, was published by ANU Press in 2018.