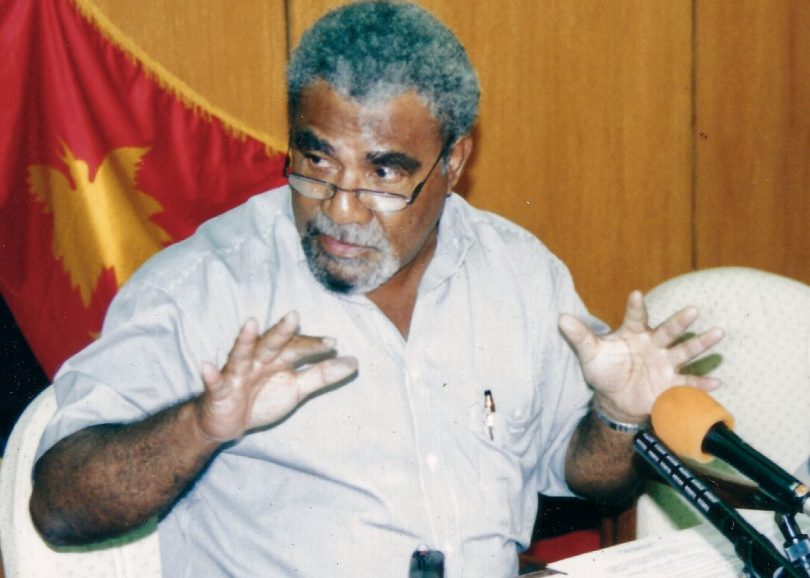 How did he do it?

So what was the secret? How, as explained in the first part of this blog, did Sir Mekere Morauta bring the PNG and its economy back from the brink of the abyss in 1999, and implement vital reforms?

First, Morauta himself was an exceptional and politically-astute economist. Three decades of experience—as one of PNG’s first economists, as PNG’s first Finance Secretary, as the first PNGean managing director of PNGBC, as governor of the central bank, as a private businessmen, as an opposition MP, and as a Minister—meant he was uniquely placed to understand the economic problems facing PNG, diagnose their underlying causes, and decide how to fix them.

Second, Morauta didn’t waste time; his acceptance speech was itself the outline of the plan to save the economy. And within a month he had already passed a Supplementary Budget, and established a team of capable and credible senior officials (notably Chief Secretary Robert Igara, Finance and Treasury Secretary Koiari Tarata, and central bank governor Wilson Kamit). The reform program that he developed was prioritised and had purpose. Time and effort were not wasted on boasting and backslapping, but used productively and efficiently to progress reforms.

Third, Morauta had the gravitas and international standing necessary to mobilise international support. Through his personal standing, he was able to access the best economic advice, including from international experts such as Ross Garnaut, Rod Sims, Andrew Elek, Keith Palmer and Paul Baxter. He was able not only to repair broken relationships with international partners, but also to mobilise financial and further technical support: bridging loans from the Australian Government, an IMF standby arrangement, a World Bank governance promotion loan, and support from the Asian Development Bank, Japan, and New Zealand.

Fourth, Morauta understood the political challenges facing his ambitious agenda—the need for strong ‘political will’. He shrewdly chose to hold onto the Finance and Treasury portfolios in order to drive both the economic and broader reform agenda. As Prime Minister, Morauta had considerable power and was able to maintain consensus from the government caucus and support for the legislative agenda.

Nevertheless, Morauta was mindful of broader resistance to reforms, from vested interests, especially those who had benefited from ‘systemic and systematic corruption’, as he once put it. His approach was to seek to persuade the public of the case for reform and build confidence in the actions of his government.

He engaged closely with the Consultative Implementation and Monitoring Council—then a newly established group of government, NGOs, research and private sector stakeholders—ensuring that senior officials attended meetings, briefed stakeholders on reforms and responded to feedback on implementation.

Media releases went out after every cabinet meeting explaining what decisions had been reached, why, and how they would be implemented. Not only did this rebut much of misinformation that was being spread, it also strengthened transparency and accountability.

Fifth, Morauta knew strong systems would be critical to the success of the reform program. In the 1990s, public policy and decision-making processes had become chaotic, allowing narrow interest groups to exercise undue influence and to disrupt reforms. An early priority for Morauta was therefore to establish orderly process.

Proper procedures were introduced for the preparation of Cabinet papers (and were vigorously enforced by NEC secretary Winnie Kiap).

A Central Agencies Coordinating Committee was established, chaired by the Chief Secretary, supported by its secretariat head Felicia Dobunaba, and including the secretaries of Finance and Treasury, Planning, Justice and Public Service. It vetted all policy proposals (to assess finance, staffing and planning implications, as well as legal correctness). The committee worked closely with Treasury officials to systematically work through a matrix of reforms, troubleshoot and overcome obstacles, and ensure orderly implementation of cabinet decisions.

For Morauta, these ‘basic’ systems of governance were not a nice add-on, but rather an indispensable vehicle for the efficient and effective development and implementation of public policy—they were critical to delivering his ambitious program of political and economic reforms. And he was prepared to champion and defend them (and indeed enshrine them in law).

By using his three years as Prime Minister productively and adeptly, Morauta halted the downward spiral of the economy and laid the foundations for further political stability and economic growth.

In the years that followed, financial and political stability would become the norm. Sir Michael Somare would serve a full term as prime minister (2002 to 2007, a first for PNG), peace would endure in Bougainville, investor confidence would return, and the PNG economy would grow at an average of 5.6% between 2002 and 2015—the strongest sustained growth in the history of the nation.

Morauta would continue to hold governments’ feet to the fire on governance and economic management. As Minister for Public Enterprises in 2011-12 he would have a brief opportunity to tighten the oversight of public enterprises and to get a sovereign wealth fund legislated.

But his legacy is much more than a list of reforms—it speaks to the character of the man. In the words of Ross Garnaut, Sir Mekere was ‘a man of strong will who never gave up on anything worth doing … what he built was worth building though it might fall down, because it proved that it can be built.’

Sir Mekere was a man of purpose, principles and determination. In 2006, he offered some reflections in a speech on good government and good governance:

Economic and political reforms are essential if we want to break the poverty trap and provide people the opportunity for healthy, productive lives.

Undertaking reform is not always a popular job. At times it can be a very lonely one. It requires strong, committed, determined leaders who are prepared to shoulder the weight of short-term unpopularity and criticism and put the nation’s long-term future in the front of their thinking and actions …

If asked what guides me personally when making decisions, I suppose there are three simple tests I always, consciously or unconsciously, set myself:

Sir Mekere’s legacy is not just about what he achieved, but also how and why he did it. He chose not to pursue the easy path of populism, because that led to economic ruin. Instead, he chose the much harder path of purposeful and principled reform: a step-by-step journey to realise the full potential of the immense wealth and talents in PNG. That journey remains incomplete.

As the PNG economy again languishes—growing at an annual average of just 1.8% between 2015 and 2020—economic and political reforms are urgently needed again. Hopefully, they will be guided by lessons from Sir Mekere’s life and legacy.

As PNG’s leaders make choices that will decide the future of PNG, there remains much that can be learnt from Sir Mekere Morauta.

Read part one of this blog here. The full two-part blog is available as a PDF file here.

Matthew Morris was an economic adviser to Sir Mekere Morauta from 1999 to 2002, and continued to work for him in later years.