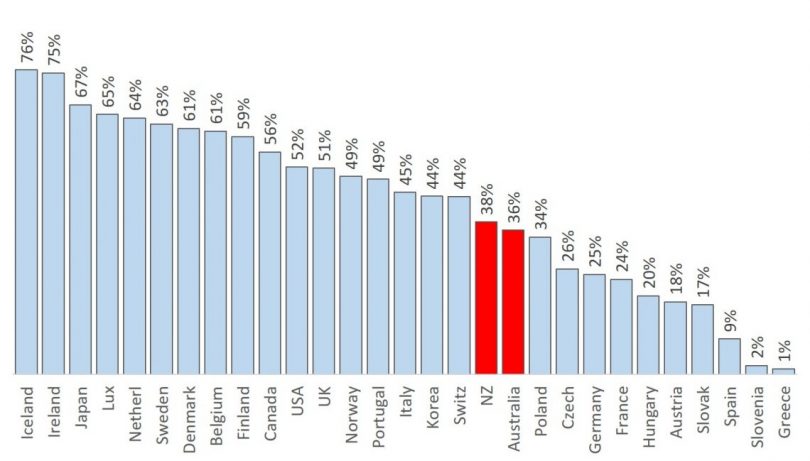 ‘Least Developed Country’ (LDC) is an official United Nations category denoting countries thought to be in most need of official development assistance and related help. Whether a country is considered an LDC depends on its GNI per capita, health and education indicators, and vulnerability. These are pretty sensible criteria. If you look at the official list of LDCs, some oddities emerge: Samoa was an LDC up until 2014; Papua New Guinea isn’t an LDC. But mostly, the list contains the countries you would anticipate.

Figure 1 shows the share of the country allocable aid (aid traceable to a particular recipient country) that Australia and New Zealand have allocated to LDCs over time. Countries becoming LDCs (or graduating from LDC status) affects year-on-year changes – Samoa’s graduation explains the fall in New Zealand’s aid to LDCs in 2014 for instance – but changes in LDC status are rare, and their impacts usually minor. 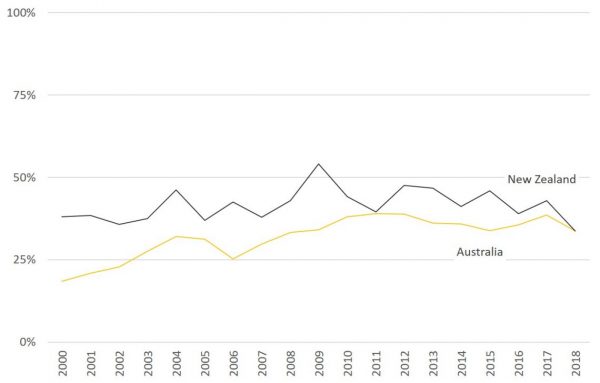 Over the medium term, there is a modest upwards trend in the extent to which Australia has focused on LDCs. No trend exists for New Zealand. Both donors’ LDC focus fell in 2018.

How do Australia and New Zealand compare internationally? The next chart shows OECD DAC donors, using 2016-18 averages. (2018 is the most recent year the OECD has data for.) I haven’t followed the OECD’s practice of estimating how much of a donor’s non-earmarked aid to multilateral organisations goes to LDCs and adding that to donors’ totals. I can’t do this and examine the Pacific as I do later in the blog. Australia and New Zealand don’t give much non-earmarked aid to multilaterals so, if anything, my approach makes the two countries look better than they otherwise would. 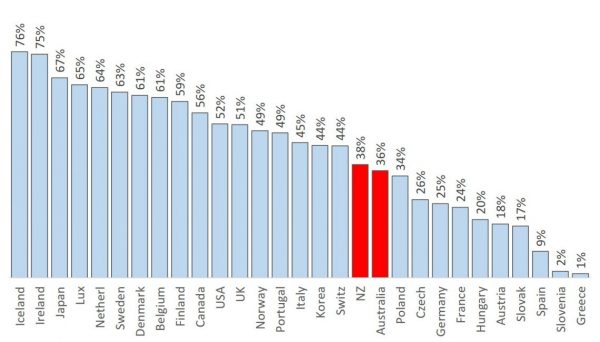 Australia and New Zealand focus less on LDCs than most of their Development Assistance Committee (DAC) counterparts. Both lag behind Italy, the median donor.

Why is this the case? In short, the answer is the Pacific. Figure 3 shows Australia and New Zealand’s LDC focus inside and outside of the Pacific.

Figure 3: Australian and New Zealand aid to LDCs, the Pacific and elsewhere 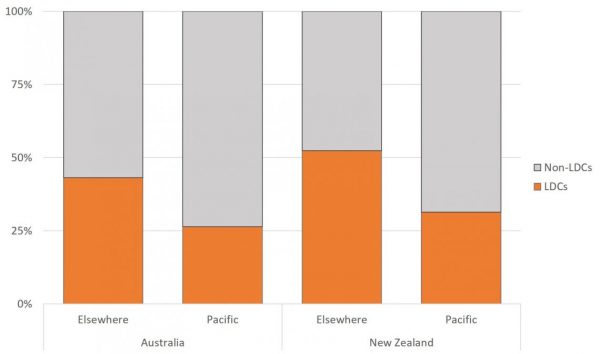 When our aid to the Pacific is excluded, both Australia and New Zealand focus more on LDCs than the median DAC donor (although in Australia’s case the gap is not large).

If we gave less aid to the Pacific we could focus more aid on places where it’s needed most. Should we?

It’s easy to make the case we should. Aid is probably less effective in the Pacific. Need – at least as captured by LDC status – is lower in the region. And, as I’ll show (along with a co-author) in a forthcoming paper, aid fragmentation is increasing in the Pacific. Quite possibly, we’d contribute more to the task of tackling poverty globally if we gave less to the Pacific and more to the poorest parts of the world.

A counterargument can also be made though. Most of the world’s LDCs are in Africa. While there are LDCs in the Pacific, three may well graduate in the next five years. If Australia and New Zealand’s aid focus is guided primarily by LDC status, our aid will shift away from the Pacific. Yet in parts of the western Pacific – particularly Solomon Islands and Papua New Guinea – development challenges are real and progress is slow. Even those Pacific countries facing less acute development challenges can meaningfully benefit from assistance. Particularly as they increasingly feel the effects of climate change.

Australia and New Zealand are also the largest donors in the Pacific. If we continue to build our expertise in the region’s countries, we might become true Pacific specialists too. It’s always possible we could grow substantial expertise on the most vulnerable parts of Africa, but I’m doubtful we’ll ever do this well. So perhaps we should specialise, focus on helping our neighbours, and get good at it. Outside of the Pacific, we could then focus almost entirely on need, giving primarily through multilateral organisations and NGOs that have global expertise.

This is a plausible defence of prioritising a Pacific focus over a focus on LDCs. Yet as a justification for good aid policy, it’s dependent on two crucial aspects of aid practice. It requires Australia and New Zealand to genuinely target need in the Pacific and not be distracted by side issues such as geopolitics. It also requires Australia and New Zealand to be genuinely learning oriented, adaptive and always striving to improve.

If these practices become integral to our aid giving in the region, a Pacific focus strikes me as fine. If they do not, the question needs to be asked – why aren’t Australia and New Zealand focusing more aid elsewhere, where it’s needed most?

Note: you can download my data, with information on sources, here.