Newly anointed Palmer United Party (PUP) Senator Jackie Lambie certainly wasted no time in raising her gripes with the foreign aid budget—something she has had her sights on since last year.

A question without notice directed to Senator Eric Abetz about support to reduce the high levels of unemployment in Tasmania quickly morphed into an attack on the aid budget in the Senate earlier this month.

After Senator Abetz unsatisfactorily answered Senator Lambie’s original question, which included a request for $5 billion of Commonwealth funding (a number suspiciously close in value to our $5 billion aid budget), Senator Lambie followed up with this:

“The minister in his answer has failed to properly address my request for his support for an extra $5 billion of Commonwealth funding for Tasmania. Does the minister agree that his Liberal government has made plans to borrow $30 billion over the next five years so that he can give it away in poorly targeted foreign aid? Can the minister explain why the poor, the sick, the needy and the unemployed of other countries are more important to him than those in his own home state?”

Abetz responded with the usual, highlighting the need for balance, the government’s steps to rein in the previous government’s aid spending and its support for aid to the region. Senator Lambie was not satisfied.

“The minister has again failed to properly address my request for his support for an extra $5 billion. Can the minister explain to the chamber why he is prepared to fight for record amounts of Australian taxpayers’ money to be sent to other countries—some of which have militaries 10 times the size of ours—while the sick, the needy, pensioners, parents, students, the unemployed and the battlers in his home state of Tasmania are being harmed by his government’s budget cutbacks?”

Given that we do support other small island states that struggle with low levels of literacy, high unemployment,  and relatively undiversified economies, perhaps Senator Lambie sees some affinity between Tasmania and the countries of the Pacific.

It already receives substantial volumes of aid from the mainland (but unlike Nauru, for example, Tasmania’s asylum seeker processing centre has closed, taking many jobs with it).

In all seriousness though, Tasmania may be a poor performer in the national context, but it is still extremely well off by regional standards. 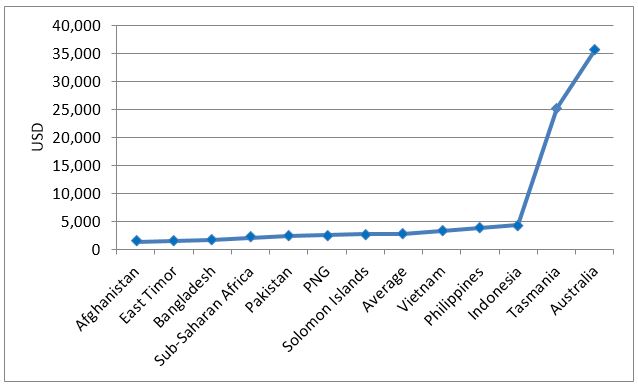 This graph compares the per capita income of the top ten recipients of Australia’s aid, with the per capita income of Australia, as well as Tasmania. Yes, Tasmania is significantly poorer than the rest of Australia, but it is a helluva lot better off than the countries which receive our aid. It is close to six times richer than our richest recipient, Indonesia, and nine times richer than the average. And its not just income. The 2010 infant mortality rate in Tasmania (per 1000 live births) was 4.5—in PNG it was 51.

As the 2011 Aid Review put it, Australia gives its aid to countries where people live “in conditions far below what Australians find acceptable.”

The other point that the Senator misses is that we only give 1.2% of our federal budget to the overseas poor. This is hardly the outcome one would expect if the global poor did actually matter more to us than our own poor.

We’ve already seen PUP try to exert influence in the new Senate in the climate tax repeal debate. Let’s hope that it doesn’t see aid as a chip to play in future Senate deal making, or, if it does, that it shows a bit more common sense and compassion.