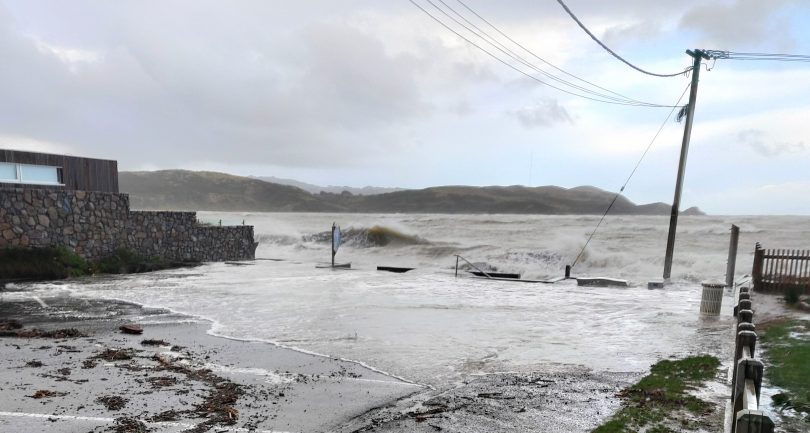 Unlike Australia, when New Zealand promised climate finance for COP26 last year, its promise was what it appeared to be: a commitment to give additional money to help developing countries tackle climate change. In New Zealand’s case, because all its climate finance currently comes from aid, this meant more aid.

The commitment wasn’t inevitable: New Zealand hasn’t had a particularly strong climate finance focus in the past (see Box 4). The COP26 improvement appears to have stemmed from the work of Green Party leader, and climate change minister, James Shaw. (The Greens are in a “cooperation arrangement” with Labour, which is why Shaw is a minister, but Labour doesn’t need them to govern, so swaying the government wasn’t a given.) MFAT staff, who have been strong on the issue, also deserve credit. And, outside of the government, NGO pressure also appears to have helped (full disclosure: my wife works for one of those NGOs).

You can see my best estimate of the increase, and its broader impact on New Zealand aid, in the chart below. 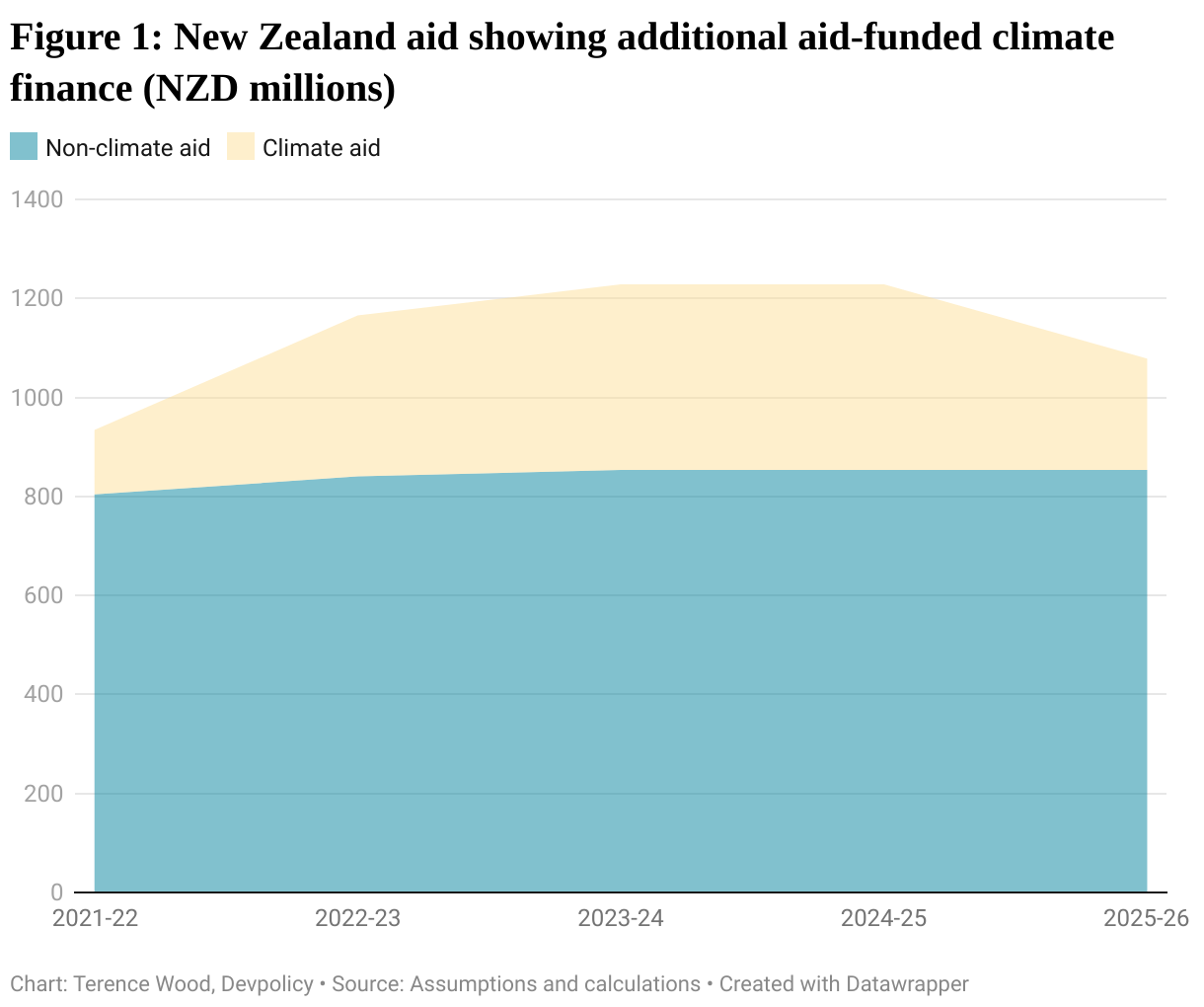 It’s only my best estimate: thanks to the opacity of New Zealand aid reporting, I’ve had to make assumptions. (My assumptions and calculations are detailed in this spreadsheet, along with all my data and sources.)

Even with assumptions, the overall pattern is clear: New Zealand’s aid-funded climate finance is set to shoot up.

Climate finance is no substitute for reducing greenhouse gas emissions. And New Zealand has been an embarrassing laggard in emission reductions. But – given that climate change is already harming the planet – climate finance is important. Climate finance is also something the world’s wealthier countries have committed to giving: 100 billion USD in total, originally by 2020, although the target wasn’t reached, and then more from 2025. The promised money is meant to be new and additional to aid. As a result, genuine increases from New Zealand are good to see.

But that’s not quite the end of the story for New Zealand. It has climate finance challenges ahead.

The first will simply be spending the money. The increase is rapid enough that it won’t be easy to spend it at the promised pace. There are solutions to this challenge. One would simply be reallocating climate finance under-spends from earlier years to 2024-25 or 2025-26. This would have the benefit of preventing the fall in climate finance currently scheduled for 2025-26. However, reallocating money to later years will require rolling under-spends across the three year aid budget periods that New Zealand uses. And rolling aid across three year budget periods runs the risk that the government will cut aid. Given the climate finance was committed at an international forum, it’s unlikely to be cut, but other aid might be. Delaying spending could be a useful solution, but it brings risks. A better solution would be giving unspent money to climate-focused multilateral organisations. Doing this means New Zealand loses control, but it’s better than aid cuts or hurrying money out the door to poorly conceived projects.

The final challenge stems from what New Zealand’s new-found climate focus does to its other aid. The chart below shows (inflation adjusted and nominal) figures for aid that isn’t climate related. 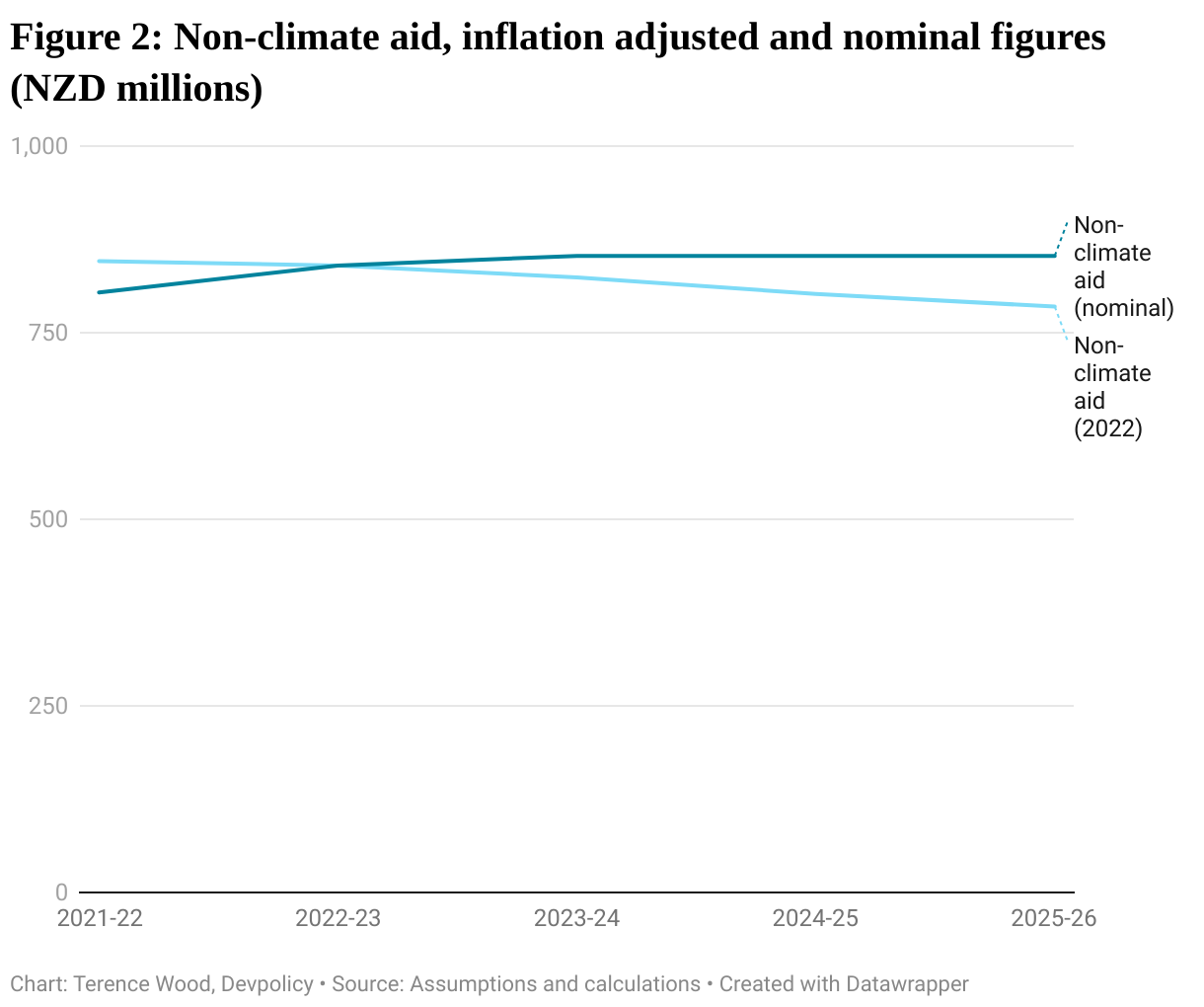 When inflation is taken into account, New Zealand’s non-climate aid is likely to start falling from next financial year. Things mightn’t end up as bad as the chart suggests. This is particularly true in 2024-25 and 2025-26, which are within the next three year aid budget period. A future government could easily decide to raise non-climate aid in those years. It could equally easily decide to cut it.

And the figure shows the bigger risk. It’s good that New Zealand is upping its focus on climate finance, but it’s also becoming wealthier, and as a result better able to give more aid of all forms. And in the rest of the world, the need for aid that isn’t related to climate change is unlikely to fall. New Zealand’s new-found interest in climate finance shouldn’t stop it from doing more to help tackle other global woes. Yet at present that’s what’s set to happen.

New Zealand has done the right thing by increasing its aid-funded climate finance. But more is needed. It has to make sure the money it gives actually helps the countries receiving it. And New Zealand can’t become fixated on climate finance. It has to play its part in tackling other development challenges too.