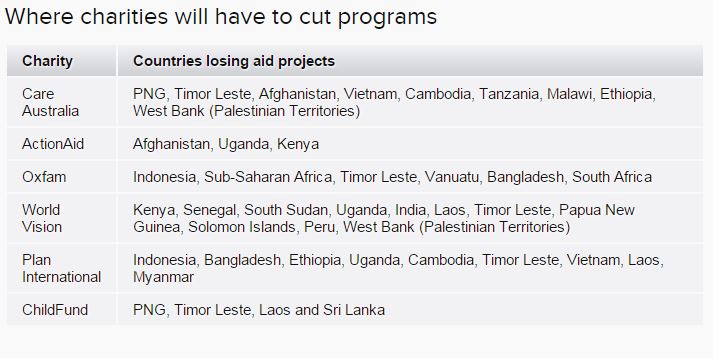 Australian NGOs have launched a media offensive in the last few weeks to rail against the upcoming aid cuts in the Federal Budget, going so far as to name projects that will likely be affected.

In recent weeks, Fred Hollows told AAP that they might have to reduce their services in Cambodia due to the cuts, and that they have already lost $1.9 million, forcing operations in Indonesia, Vietnam and parts of Africa to close.

World Vision told SBS that they would be cutting $5 million of programs, starting in Kenya, Senegal, South Sudan, Uganda, India and Laos. Save the Children appeared in The Australian, saying their Children of Oruzgan project in Afghanistan may have to close.

Oxfam’s Helen Szoke told Radio Australia that it will have to cut some of its projects helping women and girls in the Pacific, while CARE Australia told ABC a maternal and infant health project in Papua New Guinea is in the firing line, and told The Canberra Times that its work in Afghanistan was also under threat.

The ABC’s roundup article includes a table of the countries where NGOs say they will be cutting projects (Timor-Leste wins the unenviable prize of being the most frequent mention).

The NGOs are not always clear about what is driving these cuts. So far the aid budget has fallen by 8 per cent in real terms from its high in 2012-13. That would be hitting NGOs, who are also facing stagnant public donations. More likely though, the NGOs are talking about prospective cuts flowing from the 20 per cent reduction in aid the government has already announced for this coming financial year (starting July). Although the details of how that cut will be implemented are unknown, presumably NGOs, like most everyone else, will be hit, and these announcements are a way to campaign against this. They certainly help to paint a clearer picture for the Australian public on the potential impact of such large aid cuts, particularly since we know that many Australians support the work of these organisations through their own donations.

Meanwhile, the Campaign for Australian Aid has launched some bright new clickable campaigning tools such as this ‘fairness test’ and a way to ‘interrupt’ Joe Hockey as he writes the budget.