Tourism is one area seasonal workers are investing in in Vanuatu (Credit: Peter Bumseng)

An objective of both Australia’s Seasonal Worker Programme (SWP) and New Zealand’s Recognised Seasonal Employer Scheme (RSE) is to encourage economic development in the Pacific (as well as Timor-Leste in the case of SWP). A number of ni-Vanuatu seasonal workers, in both the RSE and SWP, have created various and sometimes unexpected businesses and responded to the changing economic environment in Vanuatu off the back of their seasonal work. Research conducted reveals that seasonal workers have been encouraged to invest money earned from seasonal work in businesses that are not necessarily aligned with what workers want or need. For example, workers have been encouraged into particular businesses by local chiefs or leaders and have pursued ventures out of obligation. Workers from areas with limited commercial opportunities are dissuaded from business aspirations due to concerns their business ideas are unsustainable due to limited resources and incomes in their villages.

Examining a recent sample (2019) of 79 RSE workers and 95 SWP workers randomly selected from four areas in Australia and three in New Zealand, it was found that 87% invested in some type of business or contributed to a family member’s or community business venture. When compared to previous research findings, the recorded number of business investments was significantly higher than anticipated. The majority of these workers had also participated in their respective schemes for more than three seasons, which is when business investment occurs. Figure 1 shows the main areas of business investment.

Figure 1: Types of business investments by a sample of RSE and SWP workers from the 2018/19 season 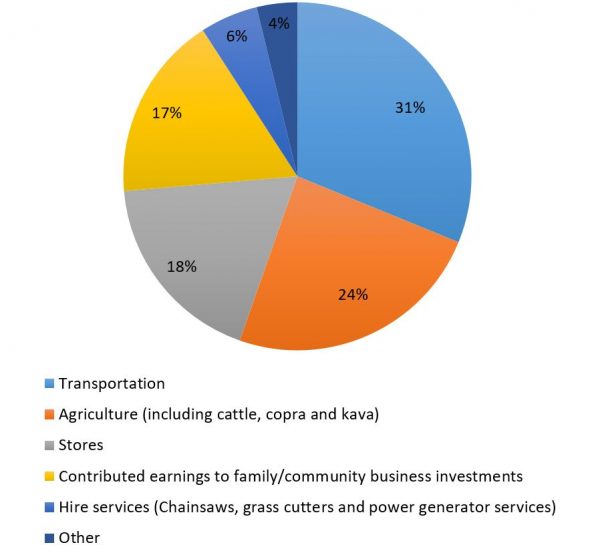 Of the 52 workers who invested in transportation enterprises, 38 purchased buses or taxis (mainly for hire in Port Vila, with the exception of two taxis bought for running services in Santo), eight purchased boats, and another six invested in trucks for island transportation. Problems concerning seasonal workers entering the transportation business since 2007 are twofold. Firstly, reports have emerged from community forums that traffic congestion in Port Vila has worsened since seasonal workers have entered the market. Workers choose to enter the transportation market not only for income but also for personal access to a vehicle. Secondly, the large increase in the number of seasonal worker owned/operated vehicles has meant that transportation businesses may have reached saturation levels. Thus limiting the ability of investors to financially maintain vehicles and meet associated costs such as insurance, on road costs and bank or community loan commitments. To meet the costs associated with their investment, workers return annually to RSE and SWP, locking them into seasonal worker programs. However, a benefit of the upsurge in the transportation industry has been that these business owners are employing local people with no access to the seasonal worker programs, to drive the vehicles.

The second-largest investment area for ni-Vanuatu seasonal workers, and this may be underestimated, is agriculture. Agriculture includes cattle farming and the growing of copra, kava and various other crops, as well as supply of agricultural tools and machinery. While overseas, workers explore and learn about new fruit and vegetable crops that could possibly be adapted to the climatic conditions in Vanuatu. This will assist in providing diversification in market produce and diets that will be complementary to ongoing food security requirements in the region.

Workers also invest in retail ventures. Other than general stores, which are the most popular retail enterprise, the second most popular shops to establish are new and second-hand stores, often supplied with material goods from Australia and New Zealand. Workers sell technological goods such as mobiles phones, laptops, and cameras, as well as second-hand clothing and reading and writing materials for school. In the early years prior to workers acquiring solar panels, many workers in rural areas were investing in petrol sales. However, once residents acquired solar panels, many generator businesses declined and, with the exception of supplying to customers with generators, motor vehicles, chainsaws and boats, the petrol business has declined somewhat.

Once workers received access to shipping containers in Australia or New Zealand to send material goods home to Vanuatu, new business opportunities began to expand. For example, workers started to purchase chainsaws, grass cutters (‘whipper snippers’), and solar panels. Although workers can acquire these goods in Vanuatu, like the sale of second-hand clothing from Australia and New Zealand, there is a perception by customers that overseas goods are of a higher quality. One worker reported that he began his own timber and machinery hire business with tools purchased in Australia; he hires out chainsaws and grass cutters to others in the community, or provides the service at a charge. Solar panels and accessories, initially sought for personal and community use, have allowed workers to develop business opportunities charging fees to recharge electronic goods. A popular business is establishing larger solar panel set-ups to run freezers and sell frozen goods such as beef, chicken, fish and ice cream. Since 2009, I have documented a rise in the demand for electronic goods by seasonal workers and their families from Vanuatu. The lack of electricity in rural areas in Vanuatu has created a demand for solar recharging services.

Businesses grouped under the category of ‘other’ in Figure 1 include bakeries, tourism bungalows, rental accommodation, and tourism operations such as guided sightseeing trips. It is important to acknowledge that not all workers intend to purchase a business of their own and feel more secure investing in larger community enterprises. Some of the workers spoken to said they had no intention of opening and owning businesses until they had gained sufficient experience working overseas. It is clear from the study that there are a number of contributing factors to encourage business ownership in Vanuatu. Material and social remittances from seasonal worker programs can promote new ideas for entrepreneurship, however, local support for the businesses is essential.

Looking to the future

This sample study reveals what only a small fraction of workers participating in RSE and SWP are doing in terms of business investment and ownership. An area in need of further research is the different businesses entered into by men and women. There were different expectations and aspirations between these groups depending on gender, marital status, number of dependants and obligations to their families and communities. The workers surveyed have shown that they are highly entrepreneurial and adaptable in regard to household income diversification. They also contribute to other’s (often different) business investments. When provided with opportunities such as using shipping services and purchasing sought after material goods, workers found niches in creating new markets. Further research could gauge just how successful these businesses are at improving economic development in Vanuatu, alongside continuous monitoring for longer-term impacts.

This is an edited version of In Brief 2019/13, originally published by ANU’s Department of Pacific Affairs as part of their In Brief series.