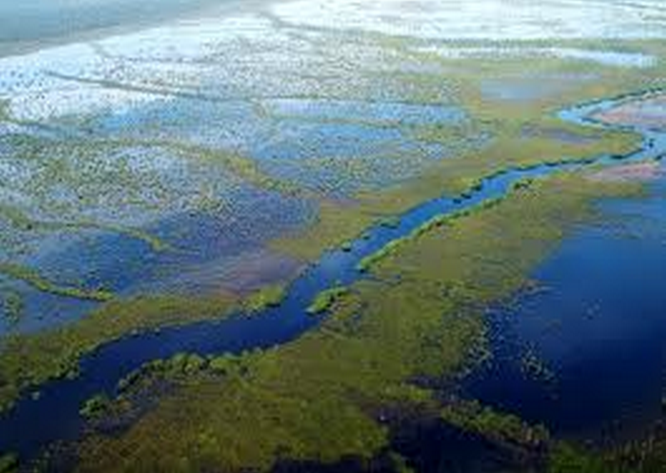 The Kalimantan Forests and Climate Partnership (KFCP) was a $47 million Australian aid project which aimed to demonstrate how peatland emissions in Indonesia could be reduced. Our 2012 assessment of KFCP, published first as a Devpolicy Discussion Paper, and then in Climate Law, largely gave the project the thumbs down. The project itself was closed abruptly and without explanation in 2013.

We were interested to read in the January 2014 Climate Policy Initiative newsletter an account of a new report on KFCP, Demonstrating Approaches to REDD+. Lessons from the Kalimantan Forests and Climate Partnership [pdf] by the San Giorgio Group (SGG). This was one in a series of case studies of how “public money can catalyze and incentivize private investment in low carbon technologies.”

This line particularly caught our interest, since, as far as we knew, KFCP didn’t actually catalyze or incentivize any private investment. Had there been some positive turn of events of which we were not aware?

On reading the report, it quickly became apparent that the answer to this question is no. Rather, the report is a rather a relentlessly positive account of a project that failed. The spin throughout could be described as “qualified upbeat”. A good example is: “While the KFCP did not prove the feasibility of peatland rehabilitation, the project as a whole has generated key insights.” Here are seven problems with the SGG report.

First, it glosses over the fundamental fact that the project failed. In the main text there are a few vague qualifiers of the sort quoted above. The closest it gets to admitting failure is the statement that “KFCP has not yet demonstrated ecosystems could be effectively rehabilitated, or greenhouse emissions saved”. But any admissions are offset by various positive claims about the project, discussed below, and summarized by the report’s largely positive assessment about the project’s “effectiveness in furthering understanding of methods to rehabilitate peat forests”. It is only when you get to Annex B that you find the facts, contained in an admission that, although reflooding was a core component of the project, none of the major canals were blocked, and only 15 out of the targeted 101 small traditional canals were blocked (by paying local people to fill them in). No conclusions are drawn from these stark facts. The obvious one is not just that KFCP’s objectives were not achieved “in full”, as the report states, but that most of the project’s objectives were simply not achieved.

Second, the report fails to discuss the most important lessons of KFCP, which relate to why it failed, and what can be learned from that failure. In our report, we argue that KFCP represented a net backward step, by setting Australia and Indonesia off on the wrong projectized path to reducing deforestation. Pilots are important but only if situated in a broader reform program which KFCP never adequately was. You can read our arguments in our discussion paper or blog (as well as this response by Jonathan Pickering).

Third, the report presents the project’s community engagement as one of its leading achievements but is strangely silent about the controversies with NGOs and Dayak groups that plagued the project.  Those controversies were widely reported, for example here and here. It was an enduring feature of the project that, despite working tirelessly to win community support, it was constantly accused of failing to consult and engage with communities, of failing to respect customary rights, and of failing to recognise and incorporate traditional Dayak knowledge of peatland rehabilitation and fire management. Perhaps the accusations were false, but the report does itself no favours by not mentioning them.

Fourth, the report also highlights KFCP’s implementation of a comprehensive peatland monitoring program. This entailed baseline measurements of peat depth and density, water levels and carbon content. That is undoubtedly a valuable accomplishment, but the report fails to mention that KFCP did not achieve its central peatland monitoring goal, which was to monitor emission levels following project interventions, thereby demonstrating the reductions in emissions that could be achieved through peatland rehabilitation. That could not be demonstrated because the rehabilitation work largely failed to eventuate.

Fifth, the report heralds the project’s development of new methods for large canal blocking. But, as it notes, these were never used, so they remain untested, and therefore of limited value for future project proponents. In particular, the key question of whether canal flooding will ever be acceptable to those who use the canals for their livelihoods remains unanswered.

Sixth, the closure of KFCP in 2013 is never explained. If the project was so successful, or at least so promising, why was it closed? If it was worth having a project to test various methodologies, then surely the project should have been finished, not stopped before it had really started. There is no discussion of why the project was prematurely closed, nor any criticism of the fact that it was.

Seventh, the report lists some 25 references, but fails to mention either our paper, or the 2011 independent review commissioned by AusAID, which quite separately drew broadly similar conclusions to ours. Our report was widely blogged about. It’s hard to believe the authors weren’t aware of it. It is worse to think they knew about it but decided not to mention it. The SGG authors might have thought we and the AusAID reviewers were too negative, but they should have taken us on, not ignored our findings.

To conclude, we don’t doubt that KFCP has some achievements to its credit. Nor do we claim to have the last word on this troubled project. But to accentuate the positive and minimize the negative in the way this report does no-one any credit. At best, KFCP’s achievements can qualify an overall assessment of failure, not the other way around.

Postscript: After drafting this post, we both attended a conference at the Crawford School at which Daniel Murdiyarso, Principal Scientist from CIFOR in Bogor spoke on deforestation in Indonesia. He had a slide on KFCP. Its title: “KFCP – why [it] failed.” This underlines our second point: we should strive to understand why KFCP didn’t work, not give the impression that, overall, it did.

Erik Olbrei is a Research Associate at the Development Policy Centre and PhD candidate at the Crawford School of Public Policy. Stephen Howes is Director of the Centre.

We appreciate the detailed response from Erik Olbrei and Stephen Howes to our case study “Demonstrating Approaches to REDD+ – Lessons from the Kalimantan Forests and Climate Partnership” (KFCP). This case study is one of a series of San Giorgio Group (SGG) case studies, which focus on the role of public resources in spurring low-carbon, climate resilient development.

In this SGG case study we analyzed only one of four components of KFCP, namely its peatland rehabilitation component. Our study was not intended as a commentary on the success or failure of KFCP, as the blog by Howes and Olbrei suggests it should have been. Rather, it was focused on estimating the costs associated with rehabilitating peatland as a measure to reverse forest loss, peatland degradation and associated emissions, and potential revenues, that might incent or discourage future investments including by commercially oriented investors.

As with other demonstration activities involving early stage technologies and methodologies, the KFCP peatland rehabilitation component faced a relatively high risk that it would fail to achieve its objectives fully. In our view, the success or failure of demonstration activities should not be viewed in black and white, based simply on an assessment of whether they met all objectives. We would agree with the postscript in the Howes and Olbrei blog post: what is most important is to learn from KFCP to inform future efforts. In particular, our report aims to extract lessons on the costs, revenues, and risks of peatland rehabilitation, and the continuing challenges that are inhibiting investment.

We found that the project has started to clarify at what cost peat forests might be rehabilitated, and that there is potential for such projects to generate substantial revenues. However, significant risks including technical uncertainties remain and discourage private investment. Realizing the possibility of increased future private investment would in particular,  require clarification of tariff and revenue sharing agreements, a robust system for measuring, reporting and verifying emissions, and effective management and regulation of land and land rights. In these circumstances, we found that international public finance played a central role supporting the delivery of public goods in a developing country that have potential high social returns.

We are aware that throughout the life of KFCP there have been a variety of criticisms from a wide range of sources. These criticisms are generally indicative of the facts that the political economy of land-based emission reduction activities is complex, that peatland rehabilitation is still in an early research and development phase and that there are tensions involved in pursuing the simultaneous achievement of development and environmental objectives. As we did not aim to evaluate KFCP in full, many of these issues were not within the more narrow scope of our report.

We hope that our report has added to the overall learning from the KFCP project and welcome further discussion.