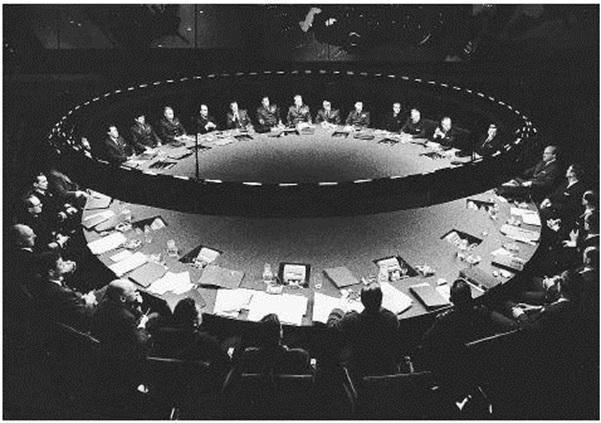 If you really wanted to get something done, would you entrust the task to a large committee of very senior, busy people whose seniority is not uniformly correlated with merit and whose expertise is patchy and often politically tinged? You bet, says UN Secretary-General Ban Ki-moon, who has quite the predilection for high-level panels.

At the end of July, Ban announced [pdf] the full membership of a high-level panel on the post-2015 development agenda, whose job is to develop a new set of international development goals to succeed the Millennium Development Goals. In June, at the Rio+20 summit, UN member countries had agreed to the formation of a 30-member intergovernmental working group to develop, by late in 2013, a proposal for “global sustainable development goals” (see paragraph 248 of the outcome document [pdf]). Ban’s post-2015 panel has been asked to “coordinate closely” with this working group, though the two bodies will prepare separate reports.

Also in Rio, Ban appointed Australia’s Prime Minister Julia Gillard to fill a Spain-shaped vacancy as co-chair of his MDG Advocates Group formed in mid-2010 – an appointment noticed at home but still not registered on the Group’s website.

Previously, in late 2011, Ban announced the formation of a high-level group on “sustainable energy for all” to develop an action agenda for Rio+20 and beyond. Before that, in August 2010, Ban established a Global Sustainability Panel whose report, issued in January 2012, was meant to provide a general framework for discussions in Rio. Former Australian foreign minister Kevin Rudd served as a member. Further back, in the wake of the unhappy 2009 Copenhagen climate change conference, Ban commissioned a high-level advisory group on climate change financing, which included former Australian senior minister Bob McMullan, to feed ideas into the UN climate change negotiations.

Most recently – though this cannot be attributed to Ban’s panel mania – the UN and the OECD announced on 3 August the co-chairs of the new Global Partnership for Effective Development Cooperation. This partnership, which emerged from the fourth High-Level Forum on Aid Effectiveness in Busan, Korea, last December, is a sort of hybrid between a Ban-style panel and a traditional UN high-level event such as the UN Development Cooperation Forum, whose last biennial meeting happened, without incident or obvious purpose, in early July. The new partnership will meet at ministerial level every couple of years or so but has the abovementioned standing co-chairs as well as a steering committee, and a mandate to both oversee and impart continuing political momentum to implementation of commitments [pdf] made in Busan.

Do these high-level global bodies achieve anything? Several of the seven mentioned above have produced reports. None of these reports has had a discernible impact, whether through the propagation of innovative ideas or the generation of political momentum. The report on climate financing was the best of this bunch. It brought together some useful analysis and extended it – but could more easily have been commissioned from one of its more technically-minded authors (for example, Nicholas Stern), acting alone or leading a small team.

The report of the Global Sustainability panel (on which I have commented previously) exhibits a particularly striking mismatch between expectations and outcomes, and well illustrates the risks of serial panelgenesis. Admittedly, the fact that it can be compared unfavourably to the 1987 report of the Brundtland commission demonstrates that a panel with a thorough method of work and enough time (900 days, in Brundtland’s case) can produce something of value. However, we live in faster times. Panels don’t innovate; they embroider and endorse known policy menus.

By now, most eminences must have taken their place somewhere in the vast Venn diagram that would be needed to depict the recent outbreak of high-level committees. Feeling left out? There’s hope for the rest of us too: Jamie Drummond has recently proposed that the post-2015 development goals be “crowdsourced”. Now we can all be on the panel.