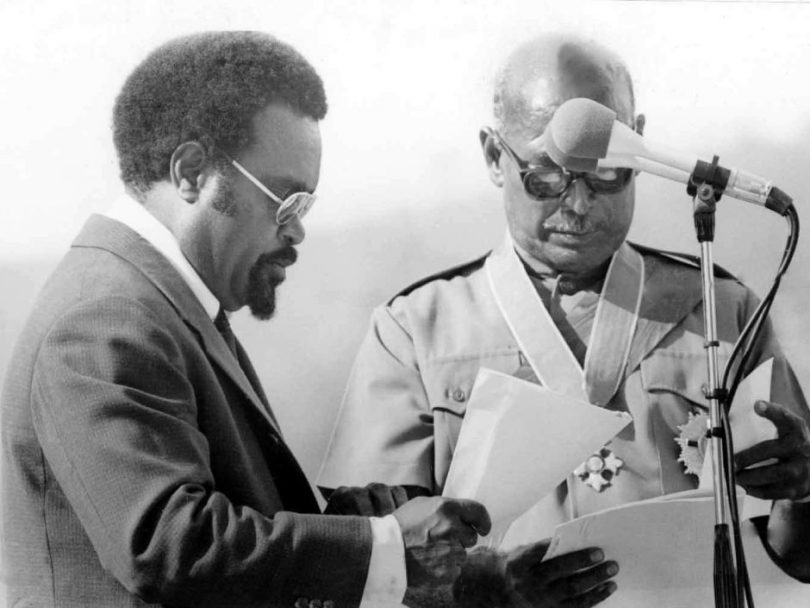 With the death of Grand Chief Sir Michael Somare – the man who led Papua New Guinea to independence in 1975 and became Papua New Guinea’s longest-serving member of parliament – the Pacific has lost one of its most prominent and respected leaders.

Somare was born in 1936 in Rabaul, where his father was serving as a policeman in the colonial administration, but returned to his father’s home province of East Sepik at an early age. His schooling began in Wewak during the Japanese occupation of New Guinea and continued at Finschhafen High School and Teachers College at Sogeri. During the 1950s and 1960s Somare taught in New Ireland, East Sepik and Madang, served as an interpreter for the Legislative Council and the first House of Assembly, and worked as a broadcast officer with the Department of Information and Extension Services. He also became vice-president of the Public Service Association and an advocate for localisation and better working conditions for Papua New Guinean workers.

Somare went on to attend the Administrative College in Port Moresby, where he became a member of the Bully Beef Club, from which emerged Papua New Guinea’s first locally initiated political party, Pangu Pati. In 1968 Somare was elected to the House of Assembly, becoming leader of the parliamentary Pangu Pati and pressing the party’s demand for independence. He was re-elected in 1972 and became chief minister of a coalition government and a member of a Select Committee on Constitutional Development.

With the election of the Whitlam government in Australia in 1972, the pace of movement to independence accelerated; self-government was granted the following year. Somare played a pivotal role in steering a course between Australia’s wish for a rapid transition to independence and resistance from people in the relatively recently contacted highlands provinces (supported by some expatriate planters), who feared they would be disadvantaged by an early move to independence. At the same time he faced a unilateral declaration of independence by activists in the Papuan half of the country, who were concerned at the prospect of increasing migration to Port Moresby by highlanders, and opposition from Bougainvilleans dissatisfied with the terms of the Bougainville mining agreement.

Notwithstanding these challenges, Papua New Guinea made a smooth transition to independence in 1975, with Somare as prime minister, confounding those in Australia and elsewhere who had predicted political and economic collapse. It remains one of a fairly small number of post-colonial states that have maintained an unbroken record of democracy.

Somare was returned as prime minister in 1977 but was deposed by his deputy, Sir Julius Chan, in a vote of no confidence in 1980. He was returned again after a national election in 1982 and deposed again by his then deputy, Paias Wingti, in 1985. He subsequently served as foreign minister, as leader of the opposition, and (as the MP for the East Sepik Provincial electorate) as provincial governor.

Following some disagreements within Pangu Pati, Somare left the party in 1994 and founded the National Alliance. In 2002 he was re-elected to the prime ministership and retained the position until his controversial removal in 2011.

In that year, while Somare was hospitalised in Singapore, a group of renegade MPs, led by Peter O’Neill, successfully moved in parliament that the prime ministership was vacant, and elected O’Neill as prime minister. The Supreme Court twice ruled against their action, but O’Neill held onto power until he was legitimately elected as prime minister following the national election of 2012. On several occasions earlier, Somare had talked about not standing for re-election, and prior to 2011 it was widely expected that he would not recontest in 2012. But in defiance of the move against him he did stand, and promised that if re-elected to government he would see those responsible put behind bars. East Sepik voters showed their displeasure at the disrespect shown to their leader by returning Somare to the East Sepik Provincial seat, but, surprisingly, after being re-elected Somare briefly aligned himself with the O’Neill government.

In the later years of his prime ministership, Somare came under growing criticism both through social media and within his own party. Criticisms largely concerned an increasing executive dominance of parliament, specifically by an inner ‘kitchen cabinet’, which included Somare’s son Arthur, who was the elected member for Angoram. There were also allegations of corruption, though he maintained a modest lifestyle. With his health failing, the man widely acknowledged as the ‘father of the nation’ decided not to contest in 2017, but he remained a critical commentator on the politics of the O’Neill government.

Apart from his political career, Sir Michael Somare was a strong advocate of Papua New Guinea’s rich culture. He underwent initiation and took the title of Sana from his father’s line. At independence he secured Australia’s funding of a national museum and a creative arts centre and was for some time chair of the Board of Trustees of the Papua New Guinea National Museum and Art Gallery. He also aspired to create an East Sepik museum, though this never eventuated.