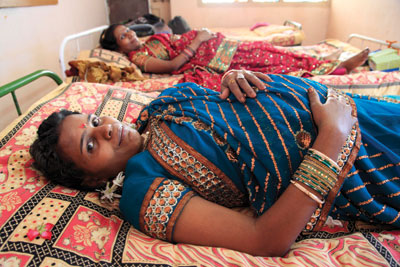 International surrogacy has been back in the headlines in Australia after a sudden crackdown in Cambodia at the end of 2016 left hopeful parents and surrogates alike scrambling from authorities (see here, here, here).

It’s just the latest in a string of stories about Australians engaging women in developing countries, predominantly in South and South-East Asia, to act as surrogates in commercial arrangements. And the bigger story probably won’t go anywhere any time soon – as soon as regulation tightens in one developing country, the business simply crosses borders.

For all the media attention in recent years, little clarity has emerged on the best policy approaches for governments experiencing a sudden surrogacy boom, perhaps because the issue is particularly emotive, involving infants, instincts and inhabiting muddy moral ground.

One can only empathise with parents who desperately want a child, but find themselves with no other option beyond engaging a surrogate to carry it. Altruistic surrogacy (where the surrogate carries a child for no financial reimbursement beyond medical and pregnancy-related costs) is legal in Australia, but its uptake is very low and it can be complicated. The cost of IVF for a surrogate pregnancy is also not covered by Medicare, so costs are high even without payment of a commercial fee to the surrogate.

But does this desire for a child make commercial surrogacy in a poor, developing country a fair or acceptable option?

Should a woman in a developing country be able to choose to enter a commercial surrogacy arrangement for financial gain, or is the inequality too great for her to give true informed consent, and the regulatory challenges too difficult to manage the risks? And what about the rights of the child?

The most notorious story emerging from this practice is that of Baby Gammy in Thailand, which first brought the issue to light in the Australian mainstream. In short, an Australian couple engaged a Thai woman to carry twins, but when it was found that one of them had Down Syndrome, they reportedly asked her to abort the fetus. The surrogate refused. After the birth the couple only brought one twin home.

The abandonment of their baby with Down Syndrome, and the plight of the surrogate, caused outcry in Australia – which was only heightened when it was revealed that the biological father of the twins was a convicted child sex offender. This story showed everything that could go wrong for the surrogate and child.

It also led Thailand to ban surrogacy for foreigners, as Nepal and India had already done to varying degrees.

In some ways, the jump to bans mimics the response to sex work in many parts of the world, another complicated issue pertaining to women’s choices, rights and safety – and for which there is debate on the right approach, including among feminists and progressives. For example, Amnesty International argues that consensual sex work should be decriminalised to offer sex workers better protection and access to rights – but not everyone thinks this will protect human rights. Others advocate for the Nordic Model, where those who buy sex are the ones committing a criminal act, rather than punishing sex workers.

While surrogacy rarely, if ever, involves sex, these debates about sex work have particular relevance because they are about a women’s right to choose to use her body for trade. And as with sex work, the most vulnerable women are often those most exposed to exploitation and abuse.

This opens up the question of whether protection should come from rules and regulations surrounding the industry, or whether completely outlawing commercial surrogacy is the best approach.

For those who believe the practice should be accepted but regulated, the arguments are based on choice, economic opportunity, protection and reproductive agency.

As a ban on foreign surrogacy was discussed in India in 2015, surrogates spoke out in many media articles (i.e. here and here) about their fear that they would lose their livelihood. Many expressed how they saw the opportunity as a golden ticket, an opportunity to earn income that they had no other way of getting, and as a more ‘moral’ line of work than sex work.

Some governments have also taken an economic view – for example, some in Nepal initially saw the international surrogacy industry as a chance to break into medical tourism and encouraged it, before backflipping as problems emerged.

Of course, women depending on commercial surrogacy for income is a problem of inequality and poverty more broadly—were women able to access other earning opportunities, this would likely be a less desirable work option. (As an aside, Cambodia has recently cracked down on the foreign export of breast milk—another industry targeting poor women desperate for income.)

And commercial surrogacy is widely frowned upon – why else would it be banned throughout Australia? The ACT, Queensland and NSW even have laws against residents engaging international surrogates, with jail terms if convicted – though these laws are seen to be ineffective.

But it’s worth considering the question raised by Australian feminist writer Clementine Ford at the time of the Baby Gammy story. “[I]s the urge to ‘protect’ women from exploitation merely another way we deny women agency when it comes to the choices they make about their bodies – particularly when those choices involve using individual sexual or reproductive function for commercial gain?”

The concerns of exploitation (not only by wealthy Westerners seeking surrogates, but the businesses and agencies that spring up to facilitate this process) are valid, but it remains to be seen whether bans help. There’s the risk that criminalisation, or sudden regulation such as in the Cambodia case, can further marginalise surrogates – after the Cambodian crackdown there were reports of women being moved across borders to give birth, too fearful to access healthcare. And the ban has not stopped women being trafficked to Phnom Penh to act as surrogates just a few months after it was introduced. As with sex work, a clear answer on protection is yet to emerge.

There are many other rights-based arguments against the practice as well. Swedish feminist organisations have called for an outright ban on surrogacy, even altruistic surrogacy, labelling it a global trade of women and children where “women can be used as containers and their reproductive capabilities can be bought”. Author Kaisa Ekis Ekman has called it a form of human trafficking, criticising feminists who support the practice for forgetting that reproduction and sex has always been at the heart of female oppression. Others argue that children born from surrogacy are denied their rights to know about their biological origins, breaching the parent-child bond.

After the recent Cambodian ban, there have also been questions about the actions of developed country governments – for example on the issuance of passports to children born by surrogacy at foreign embassies, the involvement of foreign nationals in facilitating the industry and on developed countries’ own laws and regulations, which push some prospective parents to look overseas. It is worth noting that commercial surrogacy is legal in many states in the US, for example, and some are pushing for Australia to revise its stance to reduce the overseas trade (there are also counterarguments to this).

But the voice that we perhaps most need to hear in this debate is the voice of women who work as surrogates. As governments scramble for answers, both in developed and developing countries, it is this voice that is missing from policy debates. Parents seeking surrogates to carry their children have mobilised and organised in many countries – including in Australia, where they advocated successfully for a parliamentary inquiry. Western feminists are debating and disagreeing on this issue. But it is not our bodies and livelihoods that are on the line.

Civil society and development actors may need to consider how best they can support the raising of surrogate voices, so they are not marginalised in debates that centre on their own protection and exploitation.