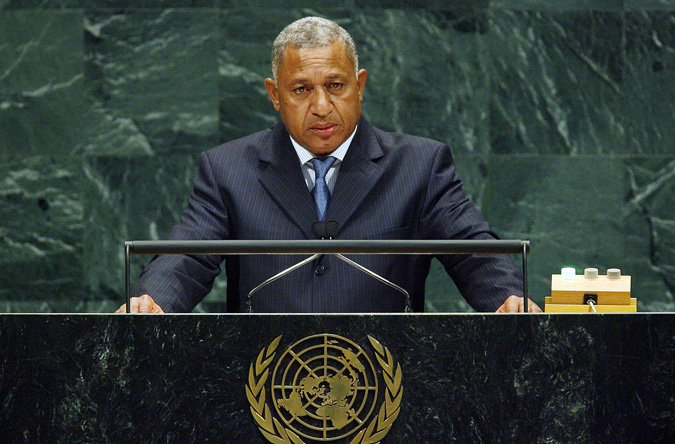 Amidst much controversy, Fiji may still be on course for elections in 2014. At the end of last year the regime dumped the high-powered Constitutional Commission headed by internationally renowned constitutional lawyer, Professor Yash Ghai. Fiji’s President argued that the Ghai draft ‘position[ed] Fiji in the past‘. The dissolution came after twelve months of what many thought was steady progress towards democracy. The Interim Regime is now preparing an amended draft to be presented to the Constituent Assembly. New Zealand and Samoa condemned the move, while Australia’s response was much more accommodative.

Major political parties have since accused Frank Bainimarama of hypocrisy over transparency and accountability issues and deplored the secrecy behind the drafting of the new Constitution. But Commodore Bainimarama has refused to accommodate opposition concerns about new electoral rules. Opposition parties have had little choice but to comply with the new and highly restrictive Political Parties Decree 2013. The former ruling party, the Soqosoqo Duavata Lewenivanua (SDL), is now proposing to contest elections under a new name.

The interim government in the meantime is taking a hard line against any form of criticism, even when from regime sympathisers. Father Kevin Barr, the former chair of the Wages Council, was threatened with deportation over a letter criticising Fiji’s close links to China.

With details more reminiscent of a Hollywood thriller than a true-life legal saga, the story of the so-called mystery yacht Phocea has spread to PNG. Beset with allegations about guns, drugs, fast women and forged papers, the luxury yacht has been detained in Vanuatu for months. Its owner, a Thai national bearing a Vanuatu diplomatic passport, recently arrived unannounced at Port Moresby’s airport aboard a chartered Boeing 737 business jet. He and another passenger (also carrying Vanuatu diplomatic credentials) were briefly detained by authorities. Vanuatu’s minister of foreign affairs, who has been charged with illegally boarding the Phocea before it cleared Vanuatu customs, was present in PNG at the same time. His claims that the three of them were on official business were denied by Vanuatu prime minister Sato Kilman and dismissed by PNG’s Peter O’Neill as ‘blatant lies’.

The PNG Opposition has challenged the legality of using Manus Island as a processing centre for asylum seekers arriving in Australia. This follows a controversial decision by Canberra just before Christmas to divert AUD 375 million from its foreign aid money to help meet the expenses of its onshore asylum seekers. This has sparked numerous criticisms from the opposition and civil society groups.

In the wake of a draft Australian defence white paper which calls on Australia to aspire to be the ‘security partner of choice‘ for the South Pacific, Australian Federal Police began negotiating their return to Vanuatu. This news came only days after China too announced a USD 1 million commitment to training and support of Vanuatu’s police force. The white paper observes an increasingly close connection between the South Pacific and the Indo-Pacific region. 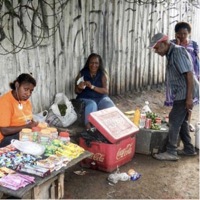 New research from the World Bank shows that poverty in PNG is unchanged between the last two household surveys, in 1996 and 2009/10, at around 40 per cent. While few details have so far been released, the Bank reports in its new Country Strategy for PNG that poverty is stagnant in all regions of PNG except for the national capital where poverty may have risen. Two-third of the struggling households of PNG are concentrated in the Highlands and rural Momase. According to the Bank, “the big economic divide in PNG is between those households with access to formal sector incomes and those without”. The Bank states that its findings “confirm quantitatively what many PNG stakeholders have noted: the benefits of faster growth and higher revenues have not translated into benefits for wide sections of the population”.

The 2013 Fiji budget was released late last year, and is defined by increased spending, especially on infrastructure. Recent Devpolicy analysis from Matthew Dornan finds that, while increases in capital spending are a positive, the size of deficit is of some concern. Biman Prasad argues that the budget will have a “positive impact on improving the quality of life of people” due to the increased expenditure on health, education and social welfare — as well as the strong focus on roads, which will help to reverse the infrastructure deterioration witnessed over the past 25 years.

A recently released World Bank report [pdf] (key findings here [pdf] and blog post here) says that non-communicable diseases account for more than 70 per cent of deaths in nine Pacific countries. The report also points to the high opportunity cost of providing health care for NCDs. Healthcare expenditure is taking away resources from education, infrastructure and other key areas, and this is compounded by the long-term nature of many NCDs. The cost of providing care has become so high that even the most basic services can overcome the entire health budget of Pacific countries. In Vanuatu, for example, the report estimates that providing glucose testing strips for monitoring a diabetic patient costs USD 164 yearly, more than the total government expenditure on health per capita. The report suggests a number of recommendations for alleviating NCDs, including behavioural changes and taxes on goods causing NCDs.

The after-effects of Cyclone Evan continue to be felt in Samoa, with the news that Samoa will not get disaster insurance from the Pacific Catastrophe Risk Insurance Pilot. Samoa, Vanuatu, Marshall Islands, Solomon Islands and Tonga are a part of the pilot insurance scheme, which is a joint initiative by the World Bank, Secretariat of the Pacific Community (SPC) and the Government of Japan. The insurance for these countries is reportedly not available due to a late submission of papers by Vanuatu. The cost of Cyclone Evan has been estimated at USD 219 million for Samoa and USD 42 million for Fiji. The 2012-13 summer has been predicted to be a ‘near average’ tropical cyclone season for the Pacific.

The Pacific Plan review team has been in Samoa, while a progress report [pdf] has been released.

French Polynesia are hopeful their decolonisation bid will go to UN General Assembly, while indigenous leaders in Easter Island want to break away from Chile and become part of the French territory.

Indigenous PNG businessmen get into the formal sector with funding boost.

Kiribati newspaper resumes publication after being closed down in June 2012 by the country’s Ministry of Communication.

A Fiji community is the first in the country to benefit from a solar power program funded by the Japanese aid program.

Vanuatu landowners want to know why a large chunk of their traditional land has been handed over to investors, while a court action challenging the lease is still underway.

Niue unsure about what will happen to a noni farm and a fishing plant that it has half shares in with the Reef Group.

The Melanesian Spearhead Group began celebrations marking its 25th anniversary this week with leaders realising the need to remain relevant in order to better serve the interests of member countries.

The ADB has a new report on Tonga urging further private sector reform despite disappointing results to date.