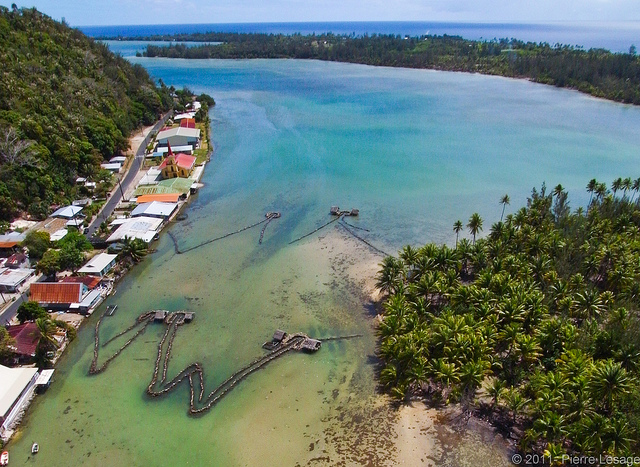 Former president Oscar Temaru managed a last minute political victory, seeing French Polynesia re-inscribed into the United Nations decolonisation list on the same day he handed over his presidency to Gaston Flosse. The resolution was introduced to the 193-member UN General Assembly by Solomon Islands, Nauru, Tuvalu, Samoa, Vanuatu and Timor-Leste. The United Kingdom, the United States, Germany and the Netherlands all disassociated themselves from the consensus vote and the French boycotted the meeting.

Temaru, who took Tahiti’s case to the UN in 2011, won just under 30 per cent of the territory’s recent elections, while Flosse’s Tahoeraa Huiraatira came first with 45 per cent, giving his party twice as many seats as all opposition parties combined, in accordance with the new electoral system rules. Flosse’s newly elected assembly voted to appeal to the UN to drop decolonisation from the General Assembly’s agenda in its first session. Flosse denounced the UN’s decision as dictatorial and vowed to never let the UN flag fly from his palace. Flosse risks losing his office (and his palace) later this year though, should the highest court in France reject his appeal on charges of corruption.

China announced a major gathering of Pacific leaders, slated for November, with talk of USD$1 billion in soft loans being offered to island states at the meeting. This is China’s chance to host a dialogue with all the Pacific Island Forum nations in a similar way to Japan’s PALM meetings and demonstrates further courting of island states by China.

More courting of islands by the US and its allies Australia and New Zealand is also underway with a convoy of navy ships planning to visit six Pacific nations in coming months to provide medical and humanitarian assistance.

The PNGDF and Fiji military are meanwhile forging closer ties to train and potentially deploy together on UN peacekeeping missions. Growing defence ties between the two signal cooperation not just in UN operations but potentially within the Pacific as the Melanesian Spearhead Group (MSG) discusses creating a permanent regional force that could be deployed quickly in times of natural disasters or civil disturbances.

A bill and a prayer for violence victims

A nationwide coalition of women’s groups throughout Papua New Guinea (PNG) gathered in strategic locations to keep vigil from 14-15 May 2013 to honour victims of violence, including the late Kepari Leniata a young PNG mother publicly burned and tortured over accusations of witchcraft.

The PNG Haus Krai movement urged the government to intervene to stem the tide of vicious crimes against PNG women and children. The historic and peaceful protest was marked by a series of domestic and overseas traditional mourning ceremonies or Haus Krai.

PNG Prime Minister Peter O’Neill assured protestors that domestic violence will be codified as a distinct criminal offence. The Family Protection Bill before parliament would allow witnesses to report violent assaults against victims of domestic abuse. Attorney-General Kerenga Kua stated that the bill will not discriminate against men. Kerenga Kua spoke in defence of the bill, saying that the new laws will offer gender-neutral protections to the entire family.

Children most affected in Marshall’s drought

There are serious concerns over the health of children in the Marshall Islands as it experiences a severe drought affecting up to 10,000 people. Most have limited access to safe drinking water and sanitation. Forecasters have warned the drought could drag on until September. The government has declared a state of disaster, as the prolonged drought causes food gardens to whither due to lack of water. UNICEF has responded with some relief assistance for diarrhoea, gastritis, hepatitis and other health issues affecting mostly children.

Also in the Marshalls, there are indications of an atoll being ‘washed away’ as trees fall into the lagoon and major infrastructure is threatened by rising waters.

The PNG Prime Minister complained vociferously about the difficulties of getting Australian visas. It was also apparently agreed that retired Australian police would be hired for the PNG police force: like the Enhanced Cooperation Program of a year ago, but without the diplomatic immunity.

Growth of 9 per cent in Australian aid budget, but 0.5 per cent delayed

Australian budget papers released last week showed an increase in development assistance of 9 per cent in 2013-14. However, the Government also delayed achievement of its 0.5 per cent GNI target for a second year in a row. The target, which had previously been postponed to 2016-17, will now be met in 2017-18. The NGO sector has been critical in response. The aid budget nevertheless did well in comparison with other sectors. The austere budget, designed to offset lower than expected revenue and pay for Labor’s legacy education and disability reforms, saw cuts over the forward estimates in funding for higher education, foreign affairs, and defence. 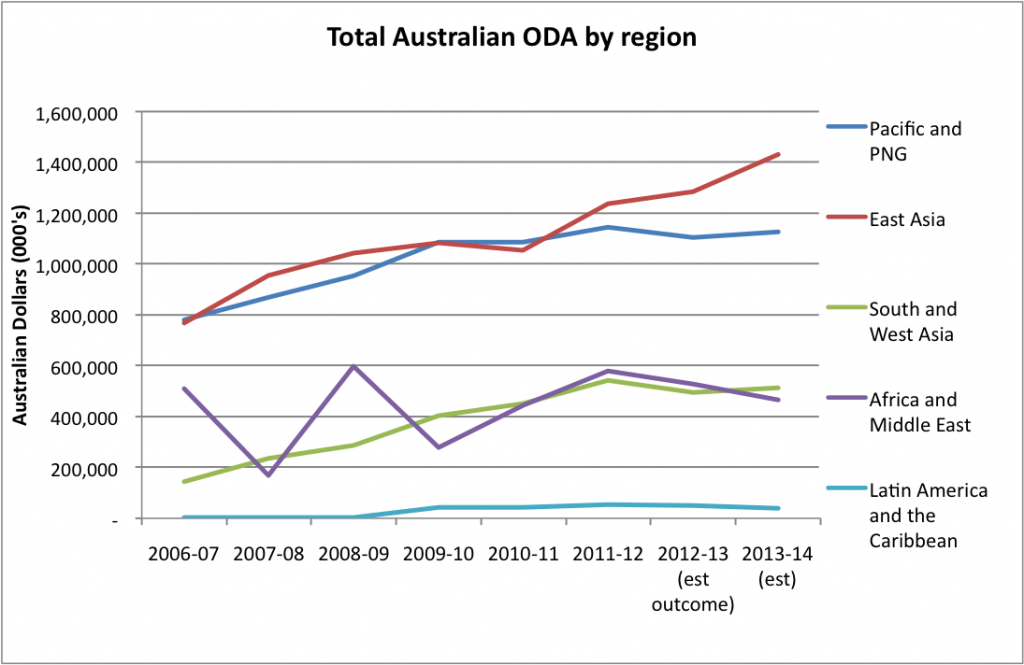 There is little change in aid funding earmarked for the Pacific in the 2013-14 budget. Funding to the region will grow 2 per cent, from AUD $1.1 billion to AUD $1.13 billion compared to actual spending in 2012-13. This is a decrease of AUD $45 million compared to the 2012-13 budget estimates. The stabilisation of aid to the Pacific contrasts with aid allocations to East Asia, which increase by almost 12 per cent as a result of growth in aid to Indonesia and Myanmar. East Asia is now clearly the region which receives the most Australian aid, pulling ahead of the Pacific in the last 2 years. Indonesia has consolidated its position as the country that receives the most Australian aid, with PNG now a distant second.

The Pacific bloc of the ACP engaged in Economic Partnership Agreement (EPA) negotiations with European Union (EU) officials in Fiji last week. Secretary General of the Pacific Islands Forum Secretariat, Tuiloma Neroni Slade suggested that the EU’s failure to respond to the unique situation faced by Pacific island countries has stalled EPA negotiations, a sentiment echoed and emphasised by Fiji’s acting prime minister Aiyaz Sayed-Khaiyum, who made strong calls for negotiations to move forward and be concluded as soon as possible.

EU Head of Delegation for the Pacific, Ambassador Andrew Jacobs, claimed that negotiations were far from over, citing significant disagreements surrounding global sourcing and rules of origin in the fishing industry and the EU’s desire to include ‘trade in services’ within the EPA framework— a move which took many Pacific ministers off-guard. While some commentators have argued that EPAs should be abandoned if the deals on offer prove inadequate, others argue that some Pacific countries have a lot to lose if negotiations fall apart. Fiji, for example, would risk losing the preferential sugar prices agreement it has with the EU.

Pacific island countries had something to celebrate as they marked World ICT Day last week. Tonga took the opportunity to mark the imminent availability of much-improved broadband internet via a fibre-optic link to Fiji and the Southern Cross trans-Pacific cable. In Vanuatu, a November date was confirmed for its cable to make landfall, with a start to commercial operations slated for January 2014. Cook Islands, meanwhile, has become the first nation in the world to complete installation of a radically new satellite Internet service operated by O3b Networks. In related news, Fijian government, business and civil society stakeholders gathered in Suva to discuss cyber security.

Australia’s Foreign Minister Bob Carr has used his special powers to cancel the 457 visa of a PNG businessman who is accused of using the visa to avoid arrest and prosecution for corruption. This comes after criticism last year from Chairman of Papua New Guinea’s anti-corruption taskforce, Taskforce Sweep, that Australia was not being proactive enough in identifying and confiscating proceeds from corruption emanating in PNG.  Corruption concerns have also risen in relation to the appointment of Nathaniel Poya as chief of PNG Ports. According to the PNGexposed Blog, Poya has a  “history of corruption, failed businesses, debts and conflicts of interest”. His appointment comes as a large ADB-financed project to rehabilitate the Lae Port reaches its end, and calls into questions the PNG Government’s recent state-owned enterprise reforms intended to enhance “transparency and accountability”.

A US $1.71 million deal between Kiribati and the EU has been criticised for undermining cooperation between PNA nations. The agreement represents a step away from the vessel day scheme, and comes a year after Kiribati broke ranks with PNA members by issuing more days than allocated under its quota. The agreement will see the EU deploy four purse seiner and long line vessels in Kiribati’s waters, increasing the allowable catch for EU vessels from 5,400 tonnes to 15,000 tonnes. It is estimated that under the agreement, Kiribati will receive $3,600 per fishing day, well below the $6,000 it receives under the PNA vessel day scheme.

This comes as US Tuna Treaty negotiations between Pacific Island Parties and the United States stall. Negotiations have been hampered by tension between PNA members wanting higher access fees consistent with those received under the vessel day scheme, and non-PNA members interested instead in US development assistance. A transitional agreement has been put in place in order to extend talks for a further 18 months.

In other news, the Cook Islands is reported to receive $14 million after doubling the fishing days of an American Samoan-based purse seiner. And in PNG, a new K85 million tuna facility has been announced which will enable the country to process its own fish.

West Papua’s application for membership at the MSG has been listed on the agenda.

Nauru MPs have failed to turn up, and the speaker Godfrey Thoma could dissolve parliament this week.

Diabetes among younger generations in Tonga has been increasing, according to a recent study.

Vanuatu Prime Minister Moana Carcasses is moving to ‘shake up’ its foreign relations.

Guam may have direct flights from Russia by the end of this year.

An activist group claiming the support of 7000 citizens in the Northern Marianas is resisting plans by the US to conduct live fire training on Pagan Island.

Guam Senators are seeking increased Compact Funds From the USA.