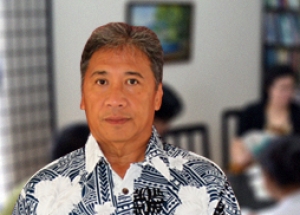 Late last year Tess Newton Cain spoke with Kolone Vaai who brought her up to speed on the economy of Samoa. You can listen to their conversation on this podcast or read the full transcript here. Read on for the highlights of what they discussed …

We started our discussion with Kolone giving an overview of the current state of the Samoan economy, with particular focus on what has changed since he provided this snapshot in 2012. He made particular reference to the impact of Cyclone Evan in December 2012, illustrating once again the vulnerability of Pacific island economies to natural disasters:

As to an assessment of where the economy is at, I would say that it’s performing much better than expected immediately after Cyclone Evan in December (2012). But it’s still an economy that is struggling to try and get back to its pre-2009 level of activity.

There are certainly some positive signs. Although 2013 growth is expected to be 1%, this is still better than had been predicted earlier. International reserves are continuing to hold at a good level, with approximately five and a half months of imports covered. And, thanks to a comprehensive food security program implemented by the government, price increases have remained low at around 1-2%. Kolone credits this with having avoided a “major dislocation” in the agriculture sector post-Cyclone Evan. (For another, less flattering, assessment of government policy in this space, see here). There is also optimism arising from construction and rebuilding in the tourism sector, which was the hardest hit [pdf] by Cyclone Evan. Kolone also identified the government initiatives to promote investment in the tourism sector, including hosting the third Small Island Developing States (SIDS) international conference in September of this year. It is hoped that these actions will contribute to reducing the recovery time for the sector from the predicted three years to one and a half.

And what of the future?

In terms of the medium and long-term issues that are there for the economy, it is really to recognise the fact that we are now becoming predominantly a service economy. And we need to put in place all the necessary infrastructure that’s needed for a service economy to compete effectively not just within the region, but globally.

Tourism will remain the most significant contributor to the services sector. Kolone noted the importance of diversification in this area, with 80% of tourists currently arriving from Australia and New Zealand. There is a need for additional infrastructure in the aviation sector to support long haul flights from potential Asian markets, plus it is important to consider “how … you get the volumes so that you can justify such long haul flights.” Of particular relevance to the tourism sector is the need to recognise that natural disasters such as Cyclone Evan are an integral part of the economic environment in Samoa. So, climate change mitigation and adaptation strategies need to be an integral part of economic policy from now on.

Elsewhere there is the need for additional infrastructure to allow for diversification in the services sector, particularly in terms of facilitating improved communications and internet coverage with the introduction of a submarine cable. Kolone also pointed to a significant impact of migration in this space:

… it is an area that was recognised as a brain drain in the 60s and 70s. But I guess we are now seeing a different perspective of the outward migration. Now, we are seeing the second or the third, fourth generation are coming back with new skill sets. So I guess that I personally think that there is a big potential in tapping the pool of skills.

Another aspect of developing the services sector, which Kolone noted with a degree of optimism, was in relation to professional sports (although he was cautious as to its sustainability).

Turning to the issue of remittances and how they contribute to the Samoan economy, Kolone made a couple of very significant points. First, that despite the impacts of the Global Financial Crisis the flow of remittances “have amazingly been very stable”. Second, whilst fourth or fifth generation Samoans living overseas may not contribute as much in terms of remittances as other members of the diaspora, this group is now looking to Samoa for employment and business opportunities:

And we’re actually observing a number of those. They’re not significant. But it’s quite an interesting trend that if they pick up, it could become a very good opportunity for the country to tap into a much wider pool of skilled labour.

We moved on to discuss the issue of public debt in Samoa. There has been recent commentary regarding the rise in public debt in the Pacific island region, with Samoa being particularly affected. Kolone confirmed that the current ratio of debt to GDP is around 60%, which exceeds the upper limit of 50% demarcated in government policy. However, he also pointed out that this was considerably lower than debt levels in the 1980s, which had been around the 80% mark. Such relatively high levels of debt are possible given that  the bulk of the national external debt are on highly concessionary terms. Kolone emphasised the need for the government to exercise caution in taking on more debt, with particular focus on ensuring the quality of investments:

… it’s more (about) taking a more commercial approach to ensure that the investments that are actually being financed from these external debts are productive. And are of a quality such that you’ll be able to rely on these investments during the duration of the following repayment period.

Kolone observed that there were few policy options available to the government, arising from the limited number of development partners. He noted with interest that organisations such as the World Bank and the Asian Development Bank had indicated a “radical” shift in their approaches to supporting development in Samoa by way of grant funding rather than loans.

Kolone gave a great synopsis of the current state of play in relation to the economy of Samoa and upcoming opportunities and challenges. The issues he raised have a lot of resonance for many of the countries in the Pacific island region.

Tess Newton Cain (@CainTess) is a Research Associate at the Development Policy Centre. Kolone Vaai is Principal Consultant at KVAConsult Ltd and former Financial Secretary for the Government of Samoa (1984-1990).

Kolone Vaai is Principal Consultant at KVAConsult Ltd, former Financial Secretary for the Government of Samoa (1984-1990) and current Chairman of the Unit Trust of Samoa (UTOS).