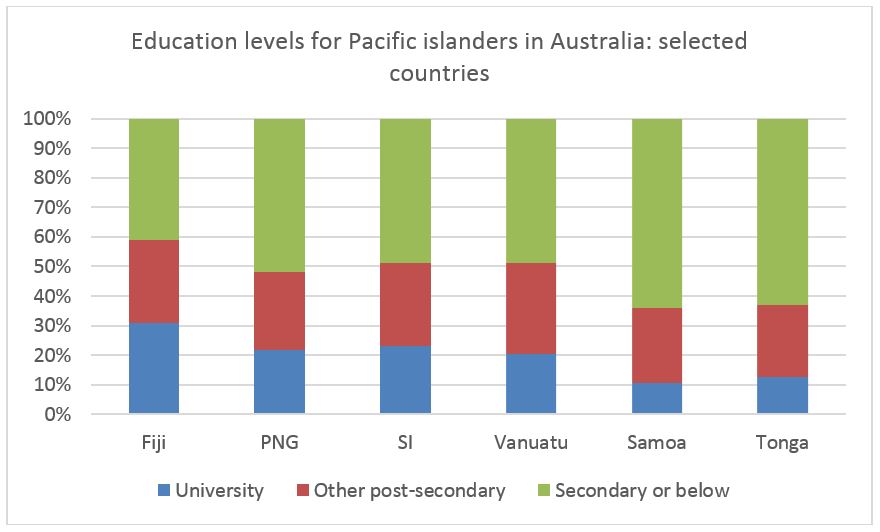 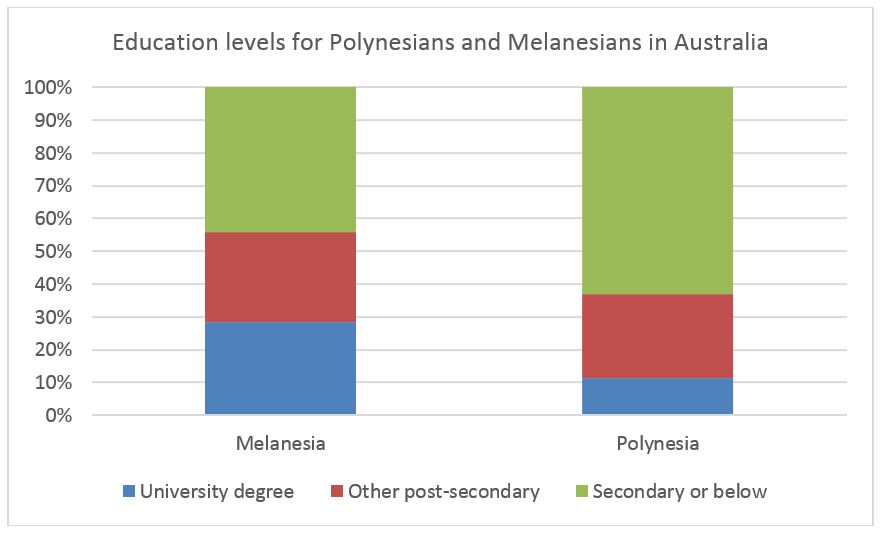 It is also interesting to look at individual countries, as the graph below does. 20 per cent of working-age Papua New Guineans in Australia have tertiary degrees, but only 11 per cent of Samoans.

Why are there these differences? We don’t have data on tertiary education as a percentage of the workforce, but it is hard to believe that a higher proportion of Papua New Guineans than Samoans have a tertiary degree. A proxy for education levels more generally is the literacy rate. The official literacy rate in PNG is just 63 per cent, compared to 99 per cent for Samoa.

New Zealand citizens who moved to Australia after 2001 have to pay for their tertiary education upfront, so that is one factor (as discussed here), but these NZ arrangements also influence the skill levels of those who come to Australia in the first place. If you are an overseas-born Papua New Guinean in Australia, you are three times as likely to have a university degree than if you are an overseas-born Samoan. Part of the reason for this is that if you are a working-age Pacific Islander who has migrated to Australia, you have almost half the likelihood of having a university degree if you were born in New Zealand (12%) than if you were born elsewhere (21%).

In other words, there is an unskilled migration route for Polynesians to Australia, but not for Melanesians.

For a start, brain drain is only a concern with skilled migration. When the supply side is able to respond, those who leave will be replaced. But where it is not, the skills lost through migration will be sorely missed. In the PNG context, for example, migrating miners can be more easily replaced than migrating doctors.

Skilled migration is also less equitable (generally, the skilled are the better-off). And one would generally expect it to be less welfare improving for a low-skill economy: basic trade theory tells us that countries should export more of what they have a lot of.

The combined message of these two posts on Pacific migration to Australia using the 2011 census data is that Australia does not do a good job of offering mobility opportunities to Melanesia. It offers very few such opportunities, and those it does offer are skewed to the skilled end of the market. A lot more needs to be done to enable Melanesia to export to Australia what it has in abundance: unskilled labour.

Jonathan Pryke is a Research Officer at the Development Policy Centre. Professor Stephen Howes is Director of the Centre.