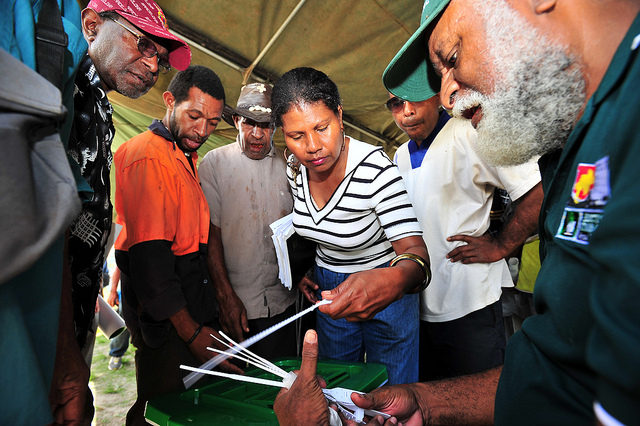 2016 saw the Papua New Guinea (PNG) government muddle down through a series of poor policy decisions. This continued the negative trend set in 2015, when the country went from having the highest expected GDP growth rate in the world to crisis management mode.

In the political realm, PNG continued promoting its international profile by hosting the African, Caribbean and Pacific Leaders Meeting, the FIFA Under-20 Women’s World Cup and preparatory meetings for APEC in 2018. But domestically there were increasing concerns about corruption and the growing arrogance of the current government, which is under the leadership of Prime Minister Peter O’Neill. The first half of 2016 also saw escalating protests from students and civil society groups, which culminated in the police shooting and injuring over 20 university student protestors.

Amongst these protests and corruption allegations, in July the Supreme Court ruled that a long-delayed opposition motion of no-confidence in the government must be considered by Parliament. Despite three former prime ministers siding with the opposition, the vote was comfortably defeated. Those members of parliament who appear to be disloyal to the government face losing their annual constituency funding of over US$3 million.

In terms of the economy, PNG’s exact growth performance is unknown. In March, the National Statistical Office released new figures on PNG’s GDP. But these have since been removed from the website. They showed an extraordinary upward revision of 40 per cent on PNG’s 2013 GDP estimate. This was a suspiciously convenient estimate and would have unburdened PNG of breaching its debt-to-GDP limit.

Such dubious figures bring into question the trustworthiness of government statistics, especially given that the government is seeking to avoid any inconvenient accusations of a recession in the non-resource sector. Regardless of government statistics, evidence of this recession is obvious, with a 16 per cent fall in retail sales in 2014–15 as well as a real decline in domestic tax collections of over 20 per cent. That’s on top of falling agricultural exports, employment and imports. Business groups expect tough conditions to continue until at least 2018 when the possibility of another major LNG project and prospective copper and gold mines might start lifting growth performance again.

The proposed 2017 budget also looked slightly dodgy, being filled with unrealistically optimistic revenue assumptions and forward expenditure assumptions. This casts serious doubts on the credibility of fiscal policy and the government’s plan to return to surplus by 2021.

On top of this, in May PNG moved to a fixed exchange rate against the US dollar, which is significantly overvalued relative to the market rate. This move led to ongoing foreign exchange shortages and controls hurting growth and confidence as well as driving imports down to their lowest levels since 2006.

Just before Christmas, in a sign of its possible embarrassment about its economic performance, the PNG government decided to suppress the latest assessment of the country by the International Monetary Fund (IMF) — the only country in East Asia and the Pacific to do so.

2017 is likely to be broken into two quite distinct elements. The first six months will be dominated by the national elections due in late June and early July. These elections could see a change of government and, with that, fresh insight into the government’s purse, allocation of scarce foreign exchange and new appointments in key government positions. But given that 2016 saw an increase in the use of emergency powers, severe curtailment of the Police Anti-Corruption Task Force, passing of tough social media laws, increased police powers, and moves to amend electoral laws to favour current parliamentarians, a fair election seems unlikely.

The second half of 2017 will depend critically on the election results. If there is a change of government, PNG will likely need to reach out to international partners to help fund the required adjustments back to a more sustainable development path. Some changes, like readjusting exchange rates, will be relatively easy. Others, like dealing with off-budget hidden deals, will be much more complex.

If there is no change of government, the O’Neill administration is likely to become increasingly autocratic and sceptical of PNG’s constitutional balances. Suppression of adverse comments —even from international sources like the IMF — bodes poorly for accountability or improvement of PNG’s governance and economic management.

Whatever the election outcome, the real but rarely addressed challenge is to implement policies that advance the wellbeing of the over 80 per cent of the population residing in rural areas and largely dependent on subsistence agriculture and cash crops.

Paul Flanagan is the Director of PNG Economics. This post is republished with permission from East Asia Forum, and forms part of an EAF special feature series on 2016 in review and the year ahead.