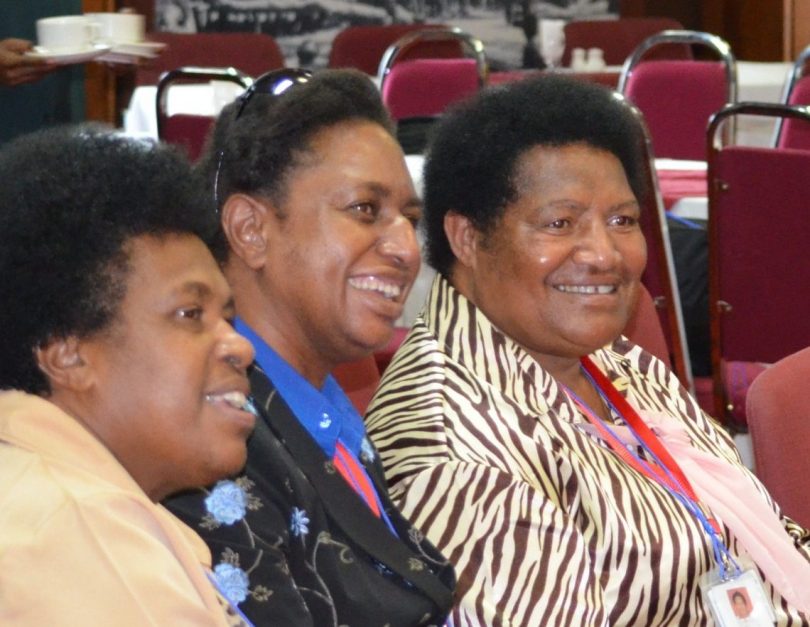 In their systematic analysis of Papua New Guinea (PNG) election data looking at whether women candidates do better when they stand more than once, Terence Wood and Thomas Wangi found that women tend to perform poorly after their first attempt. Their research showed that most of the time, women candidates performed worse the more often they stood. However, there are exceptions. Former Eastern Highlands Governor Julie Soso is one example. I would like to contribute to this discussion by providing a bit of insight into Julie Soso’s case.

Note: Limited preferential voting replaced first past the post in 2007

When Soso first contested in 1997, she managed to secure 5.2 per cent of the 228,639 total allowable ballot, and finished fourth in a field of 36. In her second attempt in 2002, she placed fifth in a field of 26 candidates with 4.9 per cent of the total vote. While she received a smaller percentage of votes, she showed in her second attempt that she still had a substantial vote base. In 2007, with the introduction of limited preferential voting (LPV), the number of candidates vying for the regional seat went back up to 36. That year was Soso’s poorest performance, finishing in eighth place. While her 4.7 per cent share of the vote was her lowest, it again showed that she still had a substantial following.

Finally, Soso surprised everyone with her 2012 win. She was one of the three successful women candidates in the 2012 national elections, and she credited her win to limited preferential voting, stating that it was the second and third preferences that carried her through. Soso came fourth on first preferences with 8.1 per cent of the vote, her best performance. And then she accumulated the most preferences. During the final elimination round, she collected 15,800 preferences to pass the absolute majority, totalling 119,606 (of 422,259, or 5 per cent). She beat her nearest rival, Sir Barry Holloway, by 8,130 votes.

Figure 1 shows how Julie Soso begins to collect preferences under the LPV system after the twenty-first elimination. 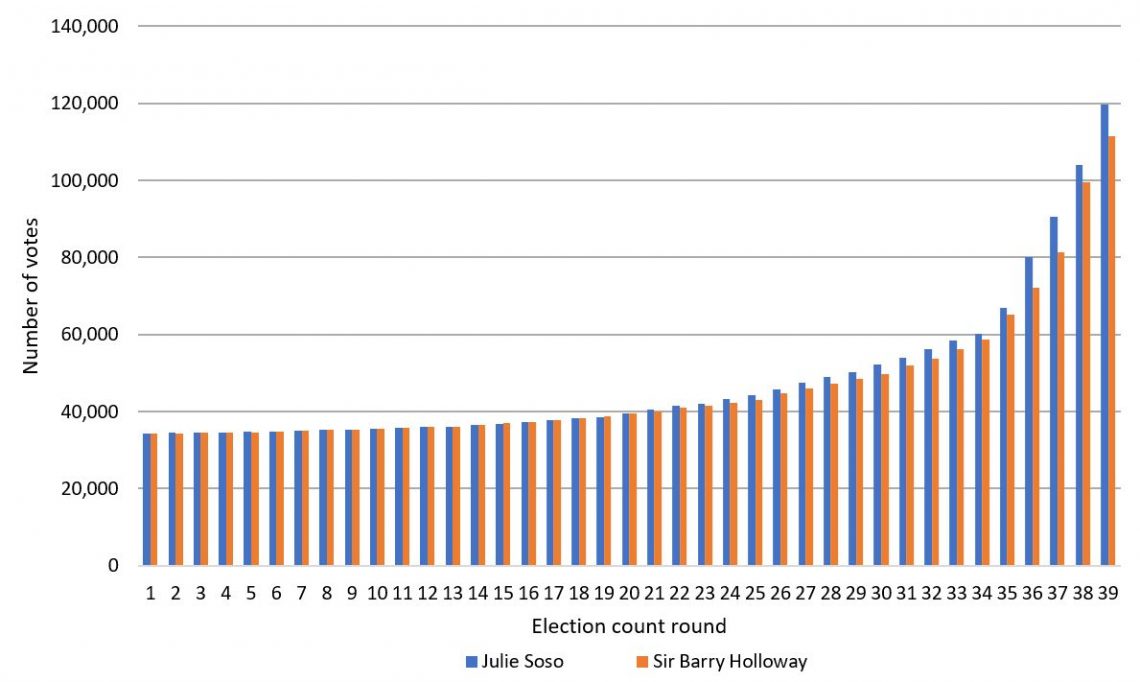 On the surface, Soso’s story seems to be a case of persistence until victory. However, there is more to it. To begin with, prior to her entry into politics in 1997, Soso worked as a radio announcer for the National Broadcasting Commission in Goroka. With such a medium at her disposal, she became well known as she advocated for bans on firearms and liquor in the province. Moreover, in the 1990s, she was the President of the Eastern Highlands Provincial Council of Women. Hence, she was a popular women’s leader in the province prior to becoming a politician. While election results do not reveal the demography of voters, it is safe to state that it was the women of Eastern Highlands who comprised her average 4.9 per cent base vote over the three elections from 1997 to 2007. They wanted her in parliament, and they made it happen.

It is also important to remember that Julie Soso, as an established entrepreneur, had the funds to contest multiple times and to maintain her support base. This fact alone significantly separates her from other women candidates, who may not be able to afford to roll out consecutive campaigns.

The fact that some women perform poorly in their second attempt could be due to various factors such as the pool of candidates, the economy, local politics, election administration and their campaign strategy. But what Soso’s winning example teaches us is the importance of maintaining a solid support base from one election year to the next.

Of course, there is also the fact that in 2017 Soso lost her seat. Again, however, she maintained her base with 6.8 per cent of first votes. But she did worse with preferences.

Wood and Wangi had two pieces of advice for women candidates: first, don’t assume your results will improve if you stand again next election; and second, don’t assume that if you did lose this time that you’re destined to fail next time. Overall, what Julie Soso’s political career shows is the importance of their second point. In PNG elections, persistence can pay off.