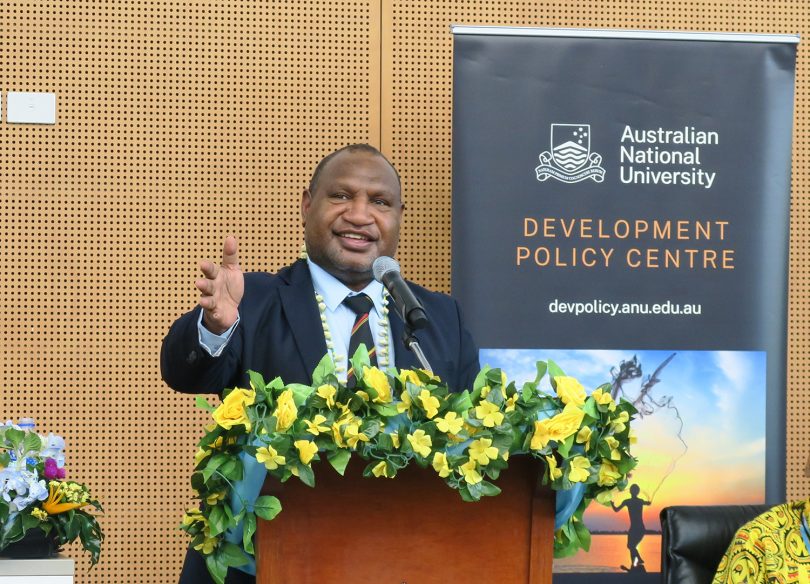 After a hiatus over the last two years due to COVID-19, the 2022 PNG Update was held at the University of Papua New Guinea (UPNG) on 20-21 October, co-hosted by the UPNG School of Business & Public Policy and the Australian National University’s Development Policy Centre.

The PNG Update returned with a bang. The lecture room was full on the first day and remained near capacity throughout the two days. More than 65 interesting papers and topics covering a broad range of PNG’s development challenges were discussed under the conference’s theme ‘Pathways to development amid COVID-19 and beyond PNG’s 10th election’.

Among the dignitaries was PNG Prime Minister James Marape, who opened the 2022 PNG Update and delivered an impassioned speech on his government’s vision and policies, ranging from strengthening democracy, governance and institutions, and investing in economic infrastructure, to strengthening law and order and combating corruption.

PM Marape’s key message was that Papua New Guineans should be optimistic about the country’s future, based largely on his ambition to double PNG’s gross domestic product (GDP) to K200 billion.

GDP is the total monetary value of goods and services produced in a country, usually in a year. In economics, there is a fundamental difference between nominal and real GDP. Nominal GDP measures the value of goods and services produced within a country calculated using current or prevailing prices, while real GDP accounts for movements in prices by using constant prices or the prices of a base year.

Because real GDP accounts for the impact of changing prices (that is, it is adjusted for inflation), it portrays a more accurate picture of the economy’s performance than nominal GDP. A change in real GDP reflects the actual growth or decline in output/production of goods and services of an economy in a year. A higher nominal GDP doesn’t necessarily mean that the economy is growing, it might just reflect inflation.

Typically, when economists assess a country’s economic performance from one year to another, they do so in real terms. For example, according to the 2022 IMF Article IV report on PNG, the PNG economy’s real growth rate is projected to expand by 4.2% in 2022, and 4.7% in 2023, before growth moderates to 3.0% in the next few years to 2027.

Even real GDP growth can mean nothing if a country fails to successfully translate the proceeds of growth into improvements in key social services such as health, education, water and sanitation, nutrition, and economic opportunities, which would lift the living standards of its people. If the real GDP growth just means more profits for multinational resource companies, how does that help PNG?

I have highlighted in the past how people are being left behind in rural PNG due to many years of government neglect leading to rural decay. Many rural Papua New Guineans are cut off from the outside world, while others have started to migrate to towns in search of better opportunities; which in turn is putting immense pressure on the infrastructure of towns, and adding to joblessness and crimes, as the towns and cities cannot cater for the burgeoning population.

Like PM Marape at the 2022 PNG Update, successive governments have appealed to the people’s good will in asking them to be optimistic about the future of the country. And to the credit of their resilience, people have lived through many years of hardship, including rural decay and the pressure and challenges related to a burgeoning population. However, noting the country is just a generation away from the exhaustion of its mineral resources, a basis needs to be given for any appeal for optimism. Harping on about a figure that means little or nothing to the rural majority and urban poor of the country does no one any credit.

PM Marape’s Treasurer Ian Ling-Stuckey has said that the best measure for PNG of economic livelihoods is “real non-resource GDP per capita”, which takes into account not only inflation (“real”) and population growth (“per capita”), but also the fact that only a small minority of the PNG population works in the resource sector (“non-resource GDP”) . The Treasurer is right. This is a much better indicator than nominal GDP.

It is good that PM Marape came to the 2022 PNG Update and that he is prepared to engage with academics and the public. It is also important that the views he or any other politician puts forward be critically discussed. At the end of his speech the PM asked for recommendations. My recommendation is that he stop talking about nominal GDP.

Watch PM James Marape making his speech at the opening of the 2022 PNG Update, starting at 41:30 in the video.