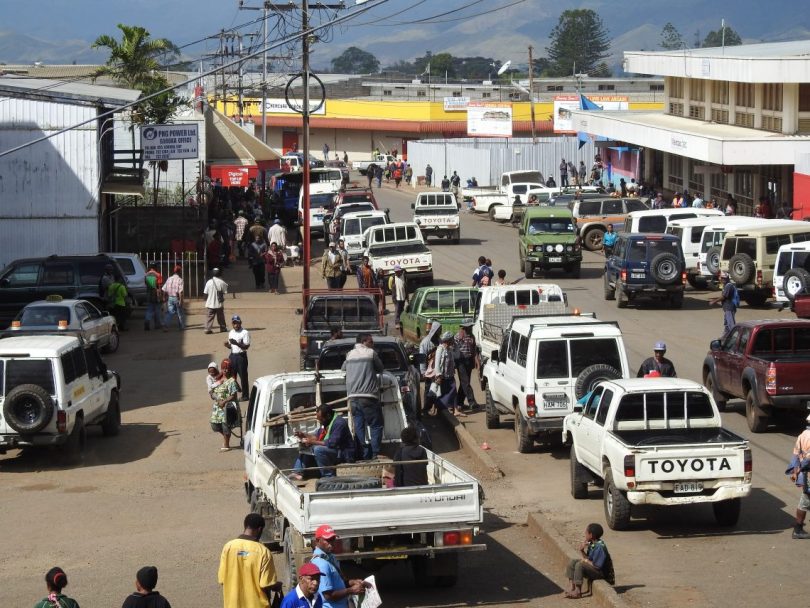 The first post in this two-part series argued that the incipient recovery underway in PNG in 2018 had faltered, and that economic growth had once again slowed. I don’t think this conclusion would be a surprise to many, including not to PNG’s new Prime Minister, James Marape, who, straight after his election to office, described the PNG economy as “bleeding and struggling”. Indeed, the economy has been struggling for some time now. Formal sector employment has fallen every year since 2013, by 2018 by a cumulative 10%. That’s very worrying news in a country with rapid population growth.

What can the Prime Minister and his team do to support a sustained recovery? Based on our 2019 PNG Survey and my 2019 PNG Update presentation, in this post I offer five suggestions.

The first, and indeed the reform being emphasised by the Marape administration itself, is to fix governance. No one can argue against the proposition that PNG, its people and its economy would benefit from less corruption and stronger law and order. Since that already seems to be the priority of the new government, no more needs to be said.

My second, much more controversial, suggestion is to devalue the exchange rate. This remains a controversial proposition in PNG, where the Kina was allowed to float up during the boom but has not been allowed to adjust afterwards. Whatever nominal depreciation there has been in recent years has just sufficed to compensate for PNG’s higher inflation. In real terms, which is what counts, the exchange rate is still at boom levels. The contrast with Australia, as shown in the graph below, is instructive. In Australia too, the real exchange rate floated up during its boom, but there has been significant real depreciation since. Not so in PNG. Until there is, export and import competing sectors will struggle to be competitive, and foreign exchange rationing will remain a fact of business life.

Figure 1: The real effective exchange rate in Australia and PNG 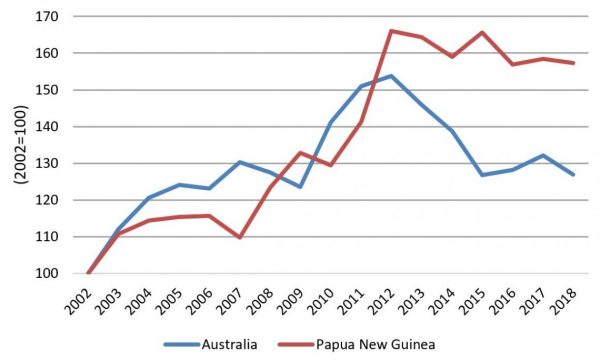 My third suggestion is for a revamping of fiscal policy. PNG has surely tried, and had some success, in bringing down its borrowing. The graph below, however, shows the underlying fiscal reality that (adjusting for inflation) revenue has been flat since 2013 while salaries and interest payments have continued to grow. Not surprisingly, in this context, significant expenditure arrears have emerged. To add to the country’s fiscal woes, there are growing worries about the debt being carried by state-owned enterprises, and guarantees provided by government in relation to them are starting to be called. The government missed its fiscal deficit target last year, and doesn’t seem to be planning to hit it this year either. A new fiscal strategy is needed, one with much more seriousness around containing the salary bill, and other areas of non-essential spending. 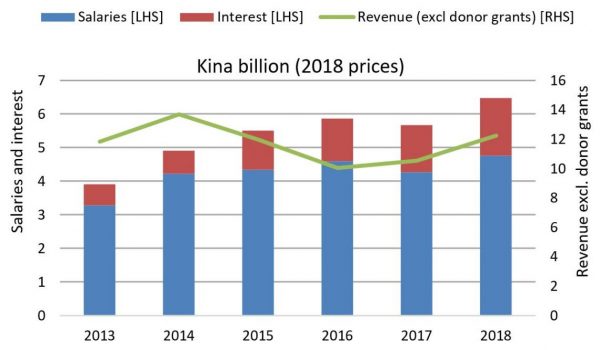 My fourth suggestion is to encourage investment in order to promote employment to counter growing joblessness. Now is not the time to restrict foreign investment, as is currently being mooted. Rather the focus should be on making the financial sector more competitive to drive down interest rates, and to improve infrastructure and governance to encourage all investors, national and foreign.

Fifth and finally, PNG needs to prepare for the next resource project and/or boom. A lot can be learnt from the last one. A Sovereign Wealth Fund was legislated for during the last boom, but has not yet been operationalised. It needs to be in place before the next boom starts (with, in my view, a modified design taking into account some of the reasons why it has been sidelined – more on that in a separate blog). Exchange rate policy during boom times also needs to be revisited. Given how difficult it has been politically to implement a real depreciation after the last boom, much greater care should be taken to avoid a real appreciation during the next one. Or else the economy will be left even less competitive.

This is not a comprehensive list, but it is a good starting point. None of the reforms proposed will be easy. And in any case reform is not just a technical matter of coming up with the right policies. To succeed, economic reforms need strong political support, and a compelling narrative. This is where the new Prime Minister and Treasurer have a critical role to play, by explaining, as they have already started to do, the difficulties the economy is in, and then outlining the difficult decisions that will need to follow.

The new government should also look for external support. The previous PM refused to turn to the International Monetary Fund (IMF), presumably because it would undermine his always-upbeat narrative on the PNG economy. If the new Prime Minister really (and correctly) believes that the economy is “bleeding and struggling” then he should consider requesting the IMF to provide the financing and the technical expertise PNG needs to support a successful economic recovery program.

This post and its predecessor draw on the ANU-UPNG 2019 PNG Survey authored by Stephen Howes, Rohan Fox, Maholopa Laveil, Bao Nguyen and Dek Joe Sum, as well as the author’s presentation at the 2019 PNG Update.