An interesting evaluation has just been released by DFAT of Australia’s assistance to PNG to help it hold elections over the last decade.

The evaluation estimates that the PNG Government spent $US207 million on the 2012 elections, and the Australian Government spent another $US35 million. This takes the total cost per voter to $US63, the highest in the world. The typical cost of an election is apparently US$5 per voter.

Costs might be increasing, but that doesn’t mean that quality is improving. The evaluation finds that the 2007 election was better than the 2002 election (the “worst elections ever” and “a debacle”), but that the 2012 election was worse than 2007. For example, the 2007 election rolls are estimated to have had half a million “excess voters” (more names than there should have been). This was an improvement from the 1.4 million excess voters on the electoral rolls in 2002, but the number increased again to 900,0000 in 2012.

Average number of candidates per seat 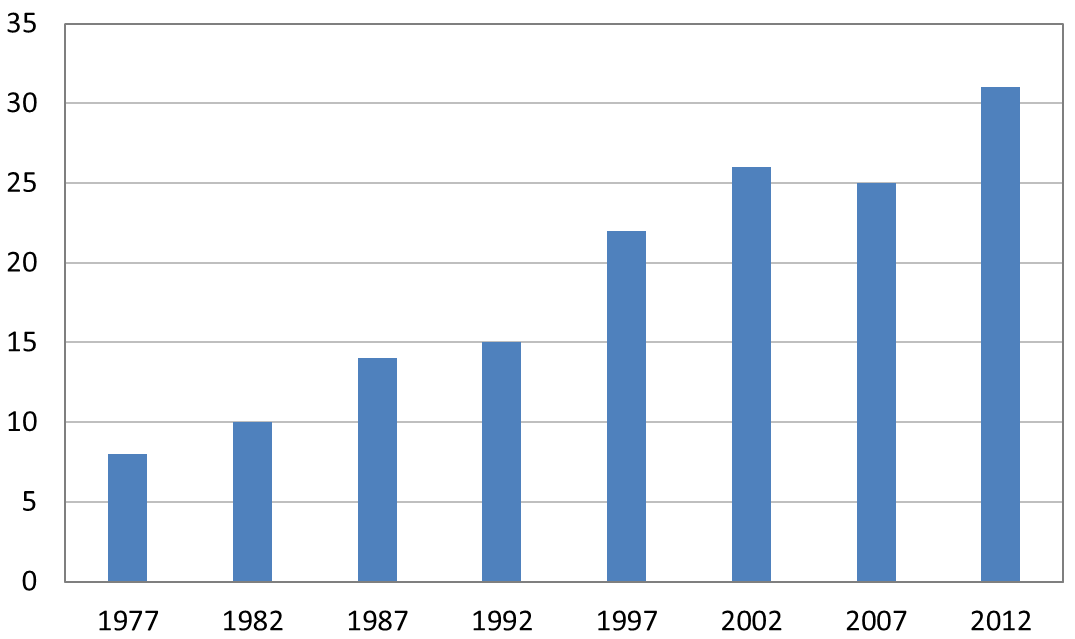 Finally, the evaluation points to problems with seat sizes. The average seat in the 2012 elections had 53,700 registered voters, but the largest (Laigip-Porgera Open) had 122,202 registered voters, and the smallest (Rabaul Open) only 22,403. The report informs us that “Parliament has systematically rejected all proposals made by the PNG Boundaries Commission to redress present inequalities, without legislating alternative approaches that might solve the problem.” (p.15)

The evaluation also makes a number of interesting observations about the effectiveness (or otherwise) of Australian assistance. This assistance has come in two forms: longer-term capacity building and short-term, focused efforts every five years to help run the elections. The evaluation finds that there have been some improvements over the last decade in the capacity of the PNG Electoral Commission (PNGEC) but that these are “not commensurate with the effort invested.” (p. 28) And the two types of assistance were not well coordinated. At one point, close to the 2012 elections, there were advisors under the AusAID PNGEC capacity building project for gender and HIV/AIDS, for M&E (1.5 advisers in fact), and for corporate planning, but there was only one actual elections operations adviser (p. 32). It is telling, and an indictment, that the report is forced to recommend that “[a]ny future Australian electoral assistance to PNGEC should focus mainly on strengthening election delivery capacity.” (p. vi)

There is a lot in this evaluation for both governments to reflect and act on before the next round of PNG elections in 2017. The Coalition might have decided that Australia won’t be distributing text books or drugs in PNG since these are “the responsibility of sovereign governments,” but there is no suggestion that we won’t be working with PNG to deliver the next election, even though it is hard to imagine any government responsibility more core than the holding of elections.

We’ve been critical of late of a number of evaluations coming out of DFAT and its Office of Development Effectiveness. This evaluation shows just how useful they can be. Credit to its authors, Simon Henderson and Horacio Boneo.