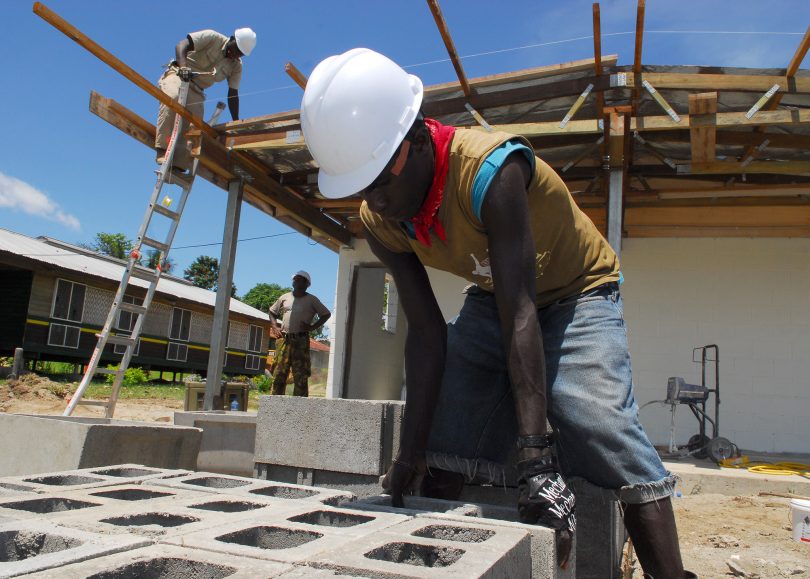 The urban minimum wage has been an important part of Papua New Guinea’s economic history. In the last few years before independence (in 1975), it was greatly increased. In the decade or so after independence, it was widely regarded as too high. In 1992, it was slashed, merged with the rural minimum, and hardly increased again for more than a decade.

We can compare the minimum wage in PNG today with other Asia and Pacific developing countries using International Labour Organization (ILO) data. As Figure 1 shows, PNG’s minimum wage is 18% below the average of the 19 countries shown if the market exchange rate is used to compare minimum wages. It is 37% below the average if differences in cost of living are also taken into account (with conversions made on the basis not of market exchange rates but so-called purchasing power parities or PPPs). The greater difference in terms of PPPs reflects PNG’s relatively high cost of living. Of the countries shown, only Samoa and Kiribati have a lower minimum wage than PNG when a PPP comparison is made. 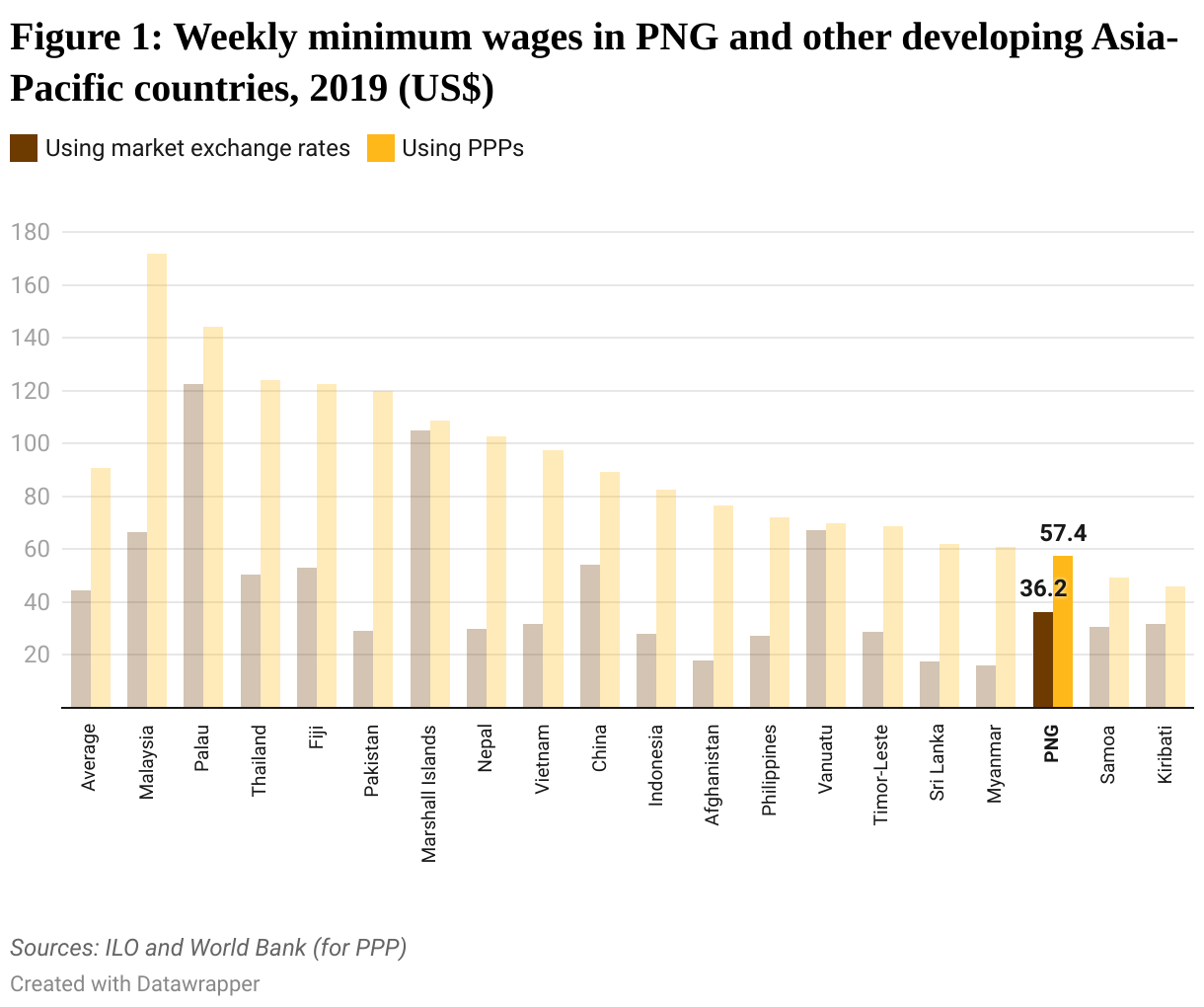 This is very different to the past. Raymond Goodman, Charles Lepani and David Morawetz in their 1985 report The economy of Papua New Guinea compared minimum wages in PNG with a subset of the countries above back in 1978. Then, the PNG minimum wage was about twice as big or more than the other comparators. Today (using market exchange rates, and the earlier authors do), PNG comes in the middle of the pack, as Figure 2 shows. 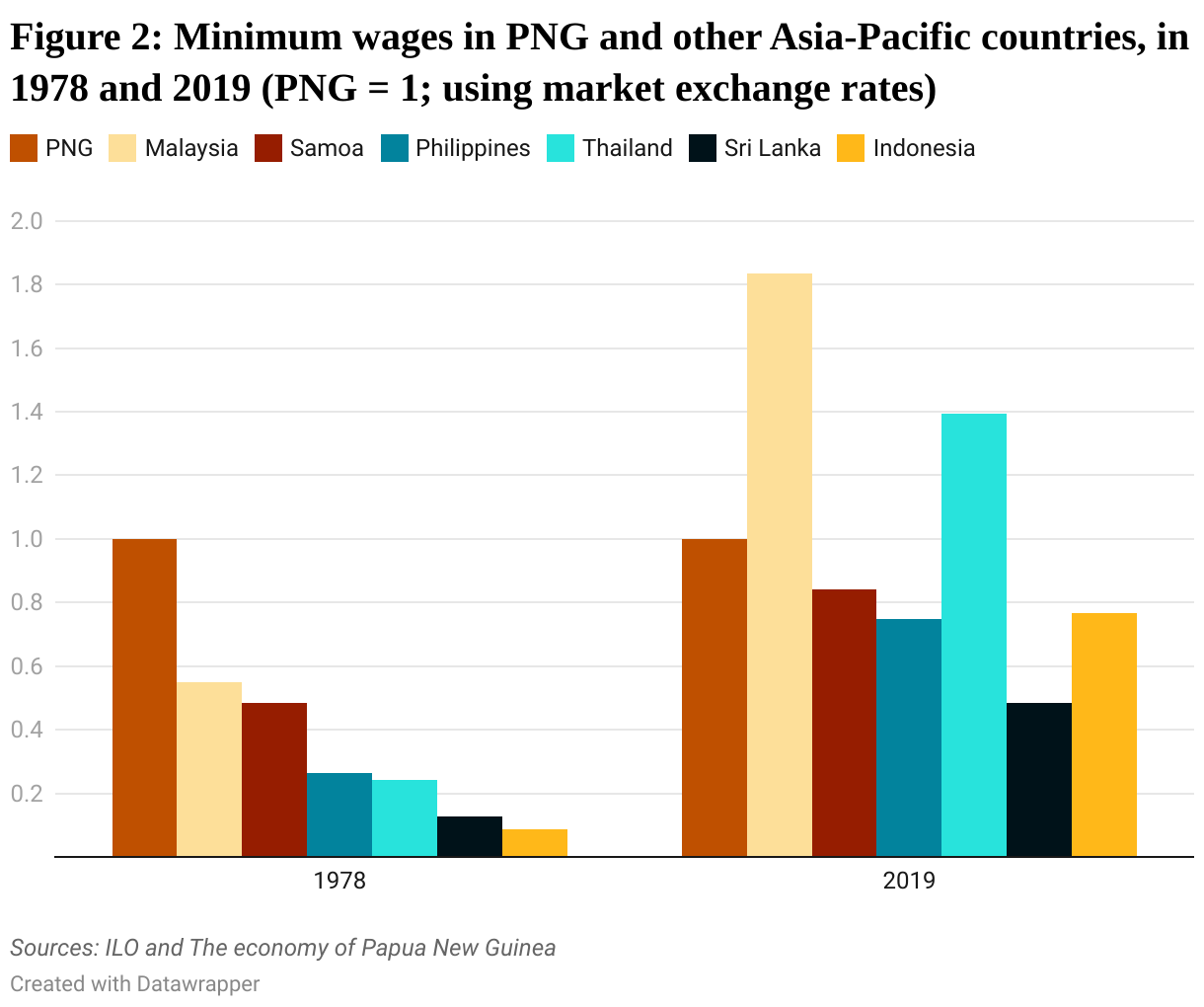 So far, we have shown that around the time of independence minimum wages were very high in PNG by international standards, and that they no longer are. Figure 3 shows how this change came about – also, for interest, comparing trends in PNG with those in Australia. 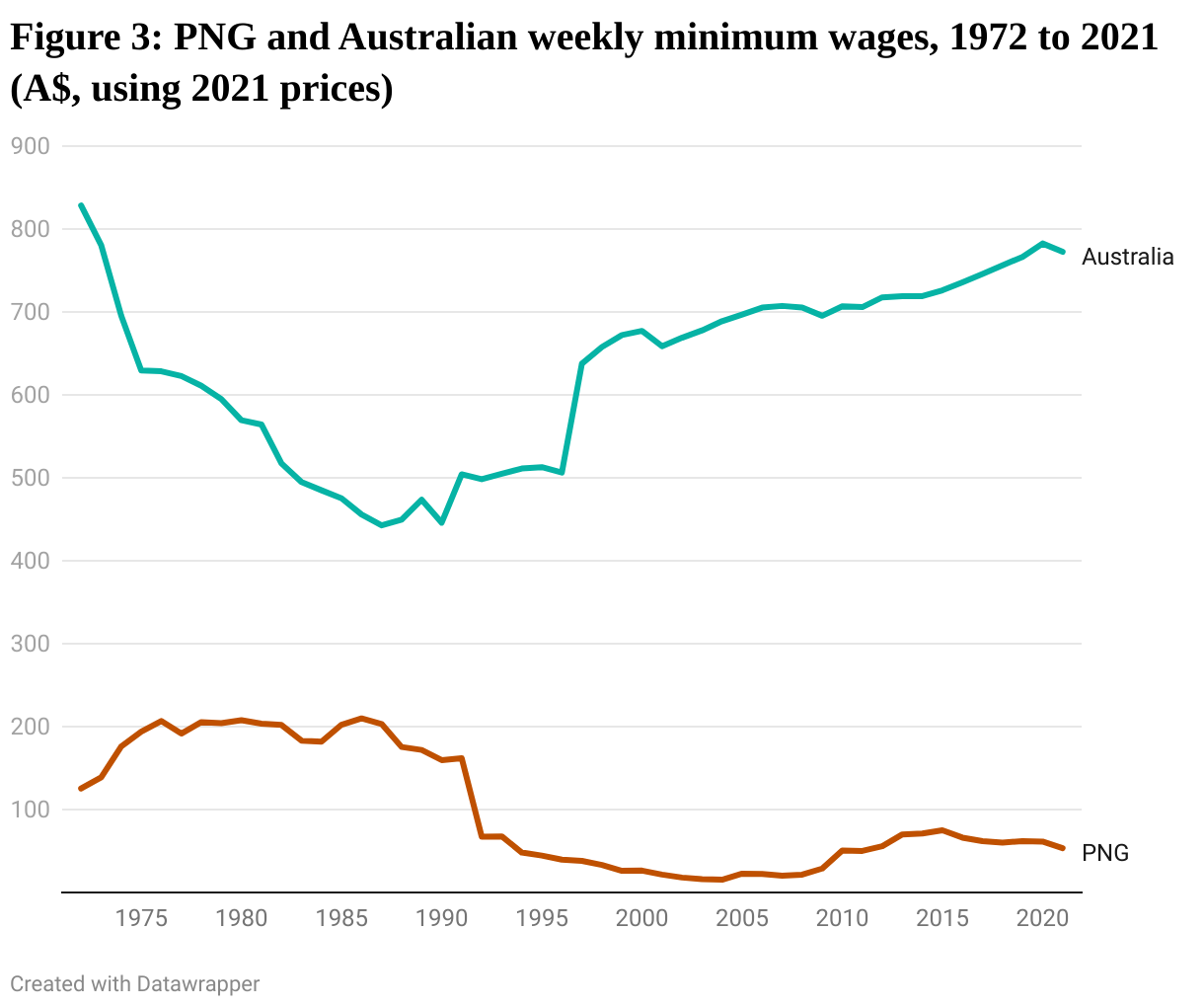 The two series follow diametrically opposed paths. The Australian minimum wage fell with the high inflation of the 1970s and industrial relations reforms of the 1980s, and by the early 1990s was little more than half its value in the 1970s. It then increased in the late 1990s and 2000s during the resource boom, and has continued to increase. Adjusting for inflation, it is now almost back to where it was in the early 1970s.

The PNG minimum wage does the opposite. It increased in the 1970s and was then held stable due to indexation, until the big bang reforms of 1992. Adjusted for inflation, PNG’s minimum wage continued to fall until 2004. There have since been some significant increases, but today PNG’s minimum wage is only about one-third of its value at independence, and below its value even in 1972, which is when the steep minimum wage increases began.

The Australian minimum wage has always been significantly higher than the PNG one, but the ratio has changed a lot over time. The lowest that ratio has ever been is 2.2 in 1986, the highest 45 in 2004.

The solution to low wages in PNG is not necessarily to increase the minimum. In some sectors, where there is a lot of international competition, a higher minimum wage might lead to job losses.

For example, in tuna processing, one of PNG’s main competitors is the Philippines. From Figure 1, we can see that PNG’s minimum wage is lower than the Philippines’ on the basis of PPPs, but actually higher on the basis of market exchange rates. While the former is what matters for the welfare of workers, the latter is what matters for international competitiveness. Whether PNG’s minimum wage should be increased will require a lot more analysis.

The point of this blog is simply that PNG’s minimum wage does not look high any more by international comparisons, as it has fallen a lot since independence. PNG is often described as a high-cost economy, and this is a fair description. However, with regards to unskilled labour, it is no longer a high-wage economy.

Data note: The PNG Economic Database provides the weekly minimum wage of PNG going back to 1972, and the PGK-AUD exchange rate. Wikipedia provides the Australian weekly minimum wage data (hourly and weekly, on the assumption of a 38-hour week) starting from 1966. The Australian CPI is from the Australian aid tracker. There are some years where Australian minimum wage rates change more than once in a year. For such cases, we took the average as annual minimum wage rate. The data for Asia-Pacific comparisons are from the International Labour Organization and the World Bank. The different frequencies of minimum wages for each country in 2019 in the ILO’s report are adjusted to convert to weekly rates. World Bank data is used to obtain market exchange rates and PPP conversion factors. For the Goodman, et al., data go to Table 3.6 on p.61 in their report.

Kelly Samof is a lecturer in economics at the School of Business and Public Policy, University of Papua New Guinea.