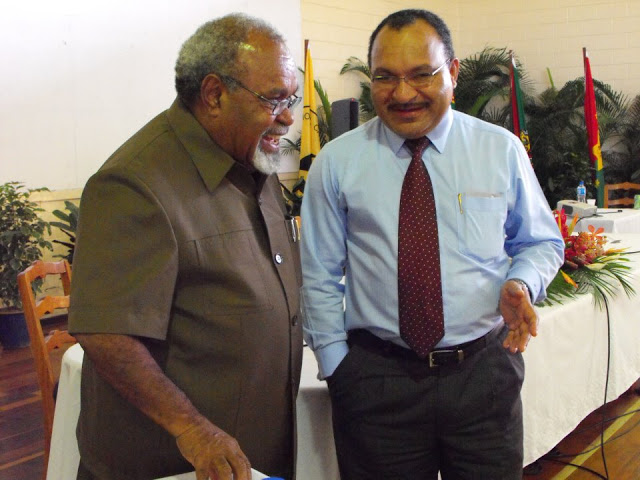 Political developments in Papua New Guinea in a historical context

In early April 2019, two senior cabinet ministers of PNG’s People’s National Congress (PNC) party (led by Peter O’Neill) resigned. This was followed by the resignation of James Marape, Minister for Finance, a senior PNC member, and Member of Parliament for the Tari-Pori electorate in the Hela province. He reportedly cited trust issues between him and O’Neill. Over the weekend of 27-28 April, another five members of O’Neill’s coalition departed. On Monday 29 April, two more PNC members left. Today, Friday 3 May, another nine PNC members resigned, including three ministers. The opposition leader Pruaitch, of the National Alliance (NA) party, has reportedly stated that they will move a vote of confidence when parliament sits on 7 May.

These are significant developments and it is worth looking at them from a historical perspective. Alphonse Gelu notes (also here), that since political parties first emerged in PNG’s political arena in 1968, PNG politics has been characterised by a complex multiple political party system. As noted here and here, this makes it difficult to understand PNG politics purely through the lens of the elections and political parties. Instead, politics seems to be defined by ‘big man’ politics, money, and loose coalitions which fuel persistent votes of no confidence (VONC), court challenges, or forced resignations.

PNG’s PMs, installed both via elections and via votes of no confidence, are shown in Table 1. Amidst all the instability, two eras stand out from Table 1: those of Somare and O’Neill. 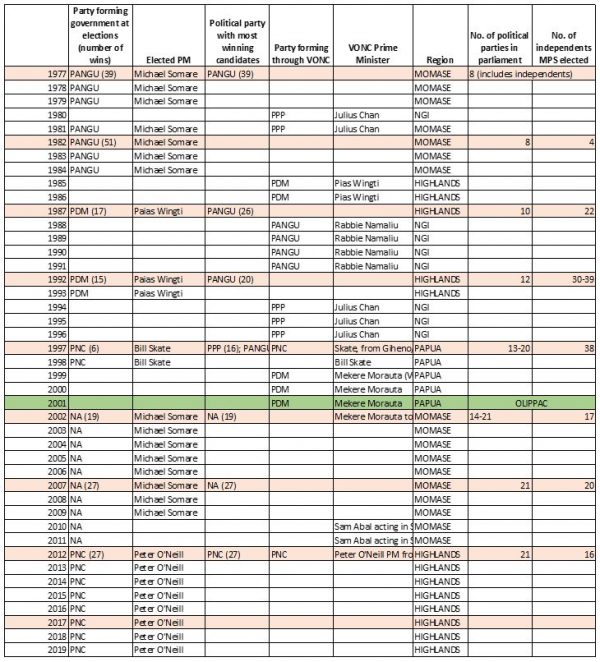 Note: Rows highlighted light orange are election years. The row in green is the year in which OLIPPAC was introduced. Sources below.

Table 1 shows that political leadership up to 2002 was characterised by a disruptive cycle of: elections, member trading, government formation, PM instalment, VONC, recalibrate the balance of power, form government, and repeat. To some extent, however, these were skirmishes in what was an era stewarded by Sir Michael Somare, the country’s first Prime Minister. For example, Paias Wingti’s instalment as PM involved him breaking from the Somare-led PANGU party, and Sir Rabbie Namaliu’s term as PM involved ousting Somare as the political leader of PANGU. Although other PMs and parties succeeded in gaining the PM position, their terms were relatively short-lived.

The Organic Law on the Integrity of Political Parties and Candidates (OLIPPAC) was introduced in 2001 to try to curb what was, and is, regarded as an unstable political situation. The OLIPPAC adds to the complexity in PNG politics, it has been debated by senior PNG political analysts and subjected to a legal challenge. For example, early on, Orovu Sepoe highlighted that the effectiveness of OLIPPAC would depend on the willingness of political actors to engage with it. In 2010, the Supreme Court ruled parts of it unconstitutional. As Henry Okole discusses, the Supreme Court ruling was fundamentally based on the fact that by regulating the behaviour of MPs the OLIPPAC violated citizens’ rights to engage in public matters through their elected representatives. Since 2002, there has been more parliamentary stability. This was also related to the increase in the grace period for VONC from six months to 18 months after elections.

Somare led NA to win the 2002 elections and his popularity in the 2007 elections  helped NA to remain in power until it began to splinter towards the end of the electoral cycle. Around 2010-2011, Somare fell seriously ill and during his absence Abal acted as PM. Growing public concerns about corruption led to political unrest that opened an opportunity for the realignment of parliamentary power. O’Neill took over the PM post amidst public unrest and Constitutional upheaval. Returning to parliament from his illness, Somare stepped aside as the political leader of NA, but not before consolidating the party’s position in government by joining the O’Neill coalition in a move that Somare reportedly explained as being to stabilise government and avoid disruptions.

Somare exited the national political arena in 2017. Reflecting his Melanesian leadership style, he publicly endorsed candidates from the two parties he had long been associated with, NA and PANGU, in his ancestral and political home, East Sepik Province.

A new era began in 2012 when O’Neill, leading PNC, came into power. This current period can be juxtaposed against the Somare era. Big man politics, money politics, and the ability to convene and consolidate alliances, certainly continue to shape PNG politics.

There are many similarities between these two dominant leaders. Both O’Neill and Somare are the only two PMs to have been elected at the polls as heads of their parties, that have won the most seats, and then been elected as PM’s on the floor of parliament. Both have subsequently gone on to serve their full terms and been re-elected in the next election. They have both served a consecutive seven years as PM. Like Somare, O’Neill has demonstrated the ability to hold his leadership of the PNC-led coalition despite controversy and governance challenges.

Without Somare, it is not clear how strong NA and PANGU can be. Both looked set to be part of a strong opposition coalition in the aftermath of the 2017 formation of government. However, since the political head of PANGU, Basil, joined the O’Neill coalition, the party seems to be in turmoil.

There are some differences though. Unlike Somare, O’Neill’s political base is set, and is bolstered by the political economy, including the presence of the large Liquefied Natural Gas (LNG) project in the Hela and Southern Highlands region. In a previous blog, I discussed how O’Neill’s leadership to some extent depends on his ability to keep his Hela and Southern Highlands brothers happy, in the context of the LNG project and their own internal political dynamics shaped by culture and society. The failures of the Hela LNG to deliver the promised development, and the imminent Papua LNG project, seems to have recalibrated the power balance in O’Neill’s political home ground. As Scott Waide notes, the resignation of James Marape – both a PNC member and a Hela man – signals change and requires reading between the lines. Politician Garry Juffa notes that this move is significant for cultural reasons. Marape’s move is also significant in that it destabilises the heart of O’Neill’s power base: his leadership on home ground in the Hela and Southern Highlands arena, in the PNC party, and as the PM.

Other differences also mark the present situation, including O’Neill’s leadership of PNG’s position internationally. The Manus Regional Processing Centre is said to have undermined Australia’s ability to call out corruption in PNG, possibly reinforcing O’Neill’s ability to keep his power base happy. The APEC meeting, and the intensification of China’s interests in PNG, have also emboldened O’Neill.

Although political stability is good in itself, PNG suffers from corruption that seriously undermines the delivery of services, and in this regard the seeming political volatility in earlier years may have been an important mechanism in preventing power from becoming entrenched in the hands of a few big men. Marape’s resignation signals this concern about O’Neill’s growing power. His recent statement is telling:

Only actions on the floor of parliament on or after 7 May 2019 will tell us how and if O’Neill will hold his leadership. The history of PNG politics suggests that understanding PMs both as big men and as political heads of political parties is important, as is understanding what constitutes and shapes their power base.