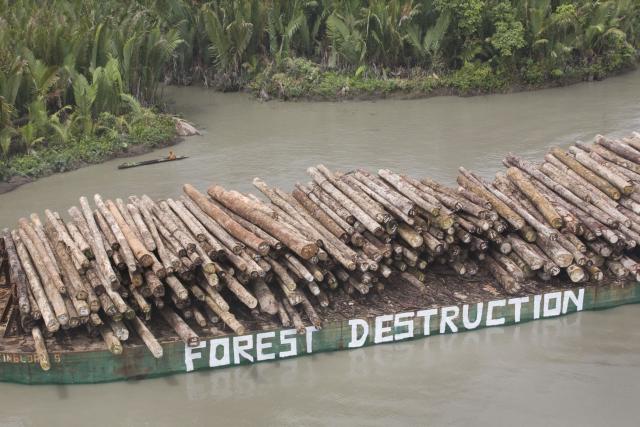 Trees felled by Rimbunan Hijau waiting to be loaded onto a ship (Esperanza A Greenpeace/Flickr/CC BY-NC-ND 2.0)

In 2014, the Papua New Guinean (PNG) government passed a legislative framework on Public Private Partnerships (PPPs). The Public-Private Partnership Act (PDF) lacks detail, particularly on risk sharing and contract management, and has not yet been gazetted; however, it shows that the government is committed to partnering with private developers to supply and maintain infrastructure and services. This has been heralded by the Asian Development Bank and PNG’s business community.

The PNG government has also opened up other opportunities for PPPs at the subnational level. Recent efforts to decentralise service delivery have meant cashed-up district-level governments now have formal autonomy to partner with the private sector (see section seven of the 2014 District Development Authority Act [pdf]).

How optimistic should we be about these developments? There have been cases where the private sector has helped improve service provision. One of the best-known examples is the case of NASFUND super, which superseded the notoriously corrupt and dysfunctional National Provincial Fund in 2002. Guided by private sector and civil society organisations, it is now one of PNG’s success stories – providing members with good financial returns.

However, there are several reasons to be wary about the recent push for PPPs. Despite historically strong economic growth (until relatively recently), PNG has not been a friend to private sector investment. The country is rated 119 out of 190 countries in the World Bank’s ease of doing business rankings. This has led to a lack of competition within the private sector, which has resulted in some companies displaying monopolistic behaviour (even though there were some reforms introduced in 2001 under the Morauta government aimed at improving competition [PDF]). This is particularly the case in rural and remote areas of the country, where most Papua New Guineans live.

We saw the challenges of PPPs in rural PNG when we undertook fieldwork in 2016 in Pomio, which is East New Britain province’s largest and most isolated district. Rimbunan Hijau (RH), a large, Malaysian multinational logging company, effectively acts as a monopoly in key sectors of the economy. It controls large logging coupes, and manages extensive oil palm plantations. The company also provides the only plane in and out of Pomio and is involved in a number of social projects in the area.

With few (if any) alternatives, it is little wonder that the district government has identified RH as a key partner in its development efforts. In August 2015, Pomio MP Elias Kapavore (who was re-elected in 2017) allocated 1 million kina to palm oil developer Tzen Niugini Ltd for the building of two major roads. Similarly in May 2016, the district government partnered with another developer, Gilford Ltd (a subsidiary of RH), to build a road from an oil palm plantation to the district capital, Palmalmal. These projects aim to overcome problems of accessibility, an obstacle that the government has identified as the district’s key development challenge.

However, these PPPs have the potential to inflame tensions between communities affected by RH’s operations and the district government. Community opposition to RH is long running, vocal and has gained international attention; one local activist’s efforts was recently recognised by the US-based Alexander Soros Foundation. During our fieldwork, many people voiced concerns about the impact of RH’s operations, including accusations against Pomio district and East New Britain provincial governments of being complicit in RH’s land grabs and human rights abuses. In addition, in 2016, customary landowners approached Pomio’s District Development Authority with a petition [PDF] that called for the district administration to revoke existing development agreements with logging/oil palm companies (including those with RH and its subsidiaries). Instead of logging and oil palm, the landowners want the government to help generate revenue through tourism, small scale agricultural and cash crops.

Given the district government’s limited resources and choice of development partners, engaging RH makes sense; however at the same time it further aligns them with RH and ostracises them from their constituents. Even if district officials are sympathetic to local communities (who have been the victims of land grabs or human rights abuses), limited development options mean they are less likely to stand up to RH.

In 2013, a commission of inquiry found [pdf] that half the allegations of Special Agricultural Business Lease land grabs in PNG were connected to RH. This suggests that, in many parts of PNG, there are likely to be similar conflicts in other remote locations. So, encouraging district authorities to partner with the private sector may bring about serious conflicts of interest. Private partners might build infrastructure, but given their inordinate power in rural areas of the country, PPPs can undermine trust in the state as an independent arbitrator in disputes between private and community interest. Ultimately, it opens up further possibilities for state capture.

With the introduction of recent legislative changes in support of PPPs, grappling with the dilemmas they involve is likely to become an important part of governing in PNG in the years ahead.