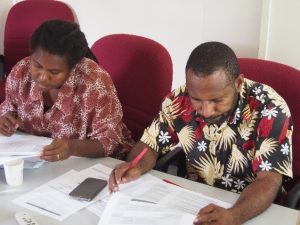 Over the past two months a small team of academics from the University of Papua New Guinea (UPNG) and The Australian National University (ANU) have been conducting research into the impacts of decentralization on the operational effectiveness of schools and health facilities.

UPNG staff Denise Lokinap and Peter Kanaparo, along with ANU staff Colin Wiltshire, Tara Davda, Grant Walton and Tatia Currie have been involved in training, a pilot and initial fieldwork in Gulf Province.

The research aims to better understand the performance of some of the current PNG Government’s key policies: financing of the health and education sectors, and decentralisation. By analysing case studies, it will shed light on how recent reforms impact schools and health facilities; and the reasons that church-run and accessible schools/health facilities performed better than those run by the state and in remote locations (key findings of the A Lost Decade? report). 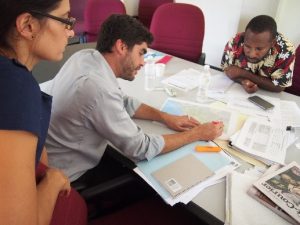 This collaborative research project seeks to strengthen links between ANU and UPNG, and build the capacity of UPNG academics by providing training and experience in research and analysis.

Training was conducted at UPNG in April and included a field trip to Central Province. The training and pilot allowed the team to test and subsequently improve their research instruments.

With an improved set of qualitative and quantitative research instruments, last month the research team made an initial visit to Gulf Province, focusing on Kerema district. 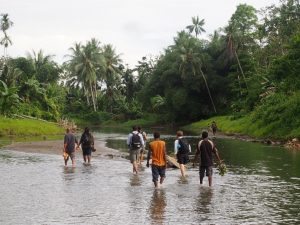 Trekking back from a remote school in Gulf Province.

Respondents spoke about the challenges of delivering services in Gulf Province – one of PNG’s most remote provinces. The team was told of the high costs of transportation, which impacted on government officers – for example, on the ability for education Standards Officers (inspectors) to visit schools. Emotions sometimes ran high as provincial and district officers, and school and health facility workers recalled the numerous hardships they endure to do their jobs. The province’s remoteness had particularly dire consequences for implementing the Tuition Fee-Free Policy (TFF) and the government’s more recently established policies on free health care provision. 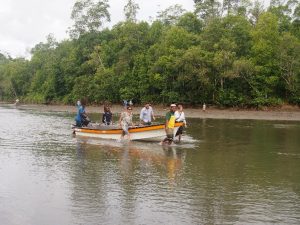 Pushing a boat through shallow waters in Gulf Province.

Further trips are scheduled to Gulf (this time to the even more remote Kikori district) and East New Britain (a better performing province) in June. The team will be analysing the data later in the year.

Our first update on the progress of this research (looking at the impact of the TFF policy on schools in Central Province) was published this week. Look out for more updates on the findings from this research on the blog over the coming months.

This research is supported by the Australian Aid Program through the Pacific Governance and Leadership Precinct, as part of the ANU-UPNG Partnership.