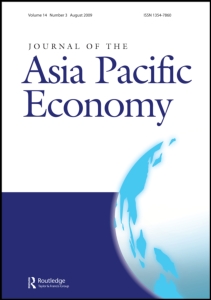 In the recent issue of the Journal of the Asia-Pacific Economy, Gerhard Hoffstaedter and Chris Roche’s article ‘All the world’s a stage’ explores recent critiques of aid, particularly in regards to notions of ‘good governance’ and accountability. Using the allegory of theatre, they suggest that much of the formal process of interaction between aid agencies and local actors can be seen as a ‘performance’, and what goes on behind the scenes is often, and sometimes deliberately, ignored. Good governance and accountability, it is argued, have been the source of much debate, a debate that centres on how international aid can be made to work better and more effectively for those it seeks to benefit. From an anthropological perspective, the authors critique dominant and hegemonic conceptions of development, ones that privilege Western conceptions of governance, both political and economic and which are based on externally derived notions of best practice. An expanded space needs to be created for alternative forms of governance, particularly Indigenous, hybrid and local forms of governance. Whilst this is not intended to suggest that corrupt or unstable governments do not exist, it is rather an understanding that democracy and governance have not ‘failed’ simply by virtue of being inconsistent with Western ideals.

This is where the authors suggest that the performance aspect of developing states is relevant: in order to continue to access international aid or funds, developing states may ‘perform’ or present a certain image of the Western ideal or ‘best practice’, what Lant Pritchett calls isomorphic mimicry (an idea previously critiqued on this blog); an image that is often discordant with the reality of what exists ‘backstage’. This separation of ‘stages’ has arguably emerged out of the need to fulfil a generalised Western model of a ‘developed’ state and notions of good governance. Hoffstaedter and Roche argue each country has its own historical, political, social and economic context and therefore a generalised development model is not only inadequate as a program for aid agencies, but also embeds the rationale for the separation between what is presented, or ‘performed’ and what occurs outside of the centre, or ‘backstage’.

As Pritchett suggests, the persistence of many state organisations’ failure to deliver is in part due to the adoption of forms dictated by ‘best practice’ elsewhere, which then camouflage their inability to actually deliver outcomes. This in turn leads to unrealistic expectations being put on these structures, which results in ‘premature load-bearing’ which then weakens them: sometimes to the point of collapse. The analogy they ask readers to imagine is what would happen if one built a bridge across a river that is made out of paper and then attempt to drive a real truck across it! Whilst the paper bridge has the form of a real bridge that does not mean that it can actually function as a bridge in practice.

Increasing or strengthening social accountability and the voices of those that development process seek to benefit  requires a greater understanding of the interplay between introduced and traditional forms of government, as well as necessitate a space for those voices to be heard. This theme is consistent with recent discussion in Melbourne by The Big Push Forward, in particular the notion that what is valued and how it is valued can inherently set up an implicit hierarchy, one that is sometimes perceived in development circles as a process of ‘helping’ ‘them’ to be more like ‘us’. This discourse, such as the discourse on ‘fragile’, ‘failing’ or ‘failed’ states can often be limiting, especially in regards to the range of actions it allows. A discourse on failed states, or even ‘underdeveloped’ states, opens up the way for interventions and impositions of particular models of governance and performance. What the authors suggest is that perhaps there are different ways to ‘read’ these alternative state models and what an alternative form of ‘theatre’ might look like. With increased accountability of this type comes the recognition of indigenous and alternative forms of government and relationships with civil society, which also requires donor countries to perhaps shift the ways in which they assess capacity development and the disposition of organisations to make positive change happen. Essentially, with a starting point of a single generalised state model, we are limited in terms of potential actions as well as a potential for greater understanding of alternative governance models, ones that may be more conducive to successful development outcomes and which, as Tim Kelsall and others at the African Power and Politics program have argued need to “go with the grain” of the societies from which they emerge.

Gerhard Hoffstaedter is lecturer in anthropology at the University of Queensland and Chris Roche is the Director of Development Effectiveness for Oxfam Australia.