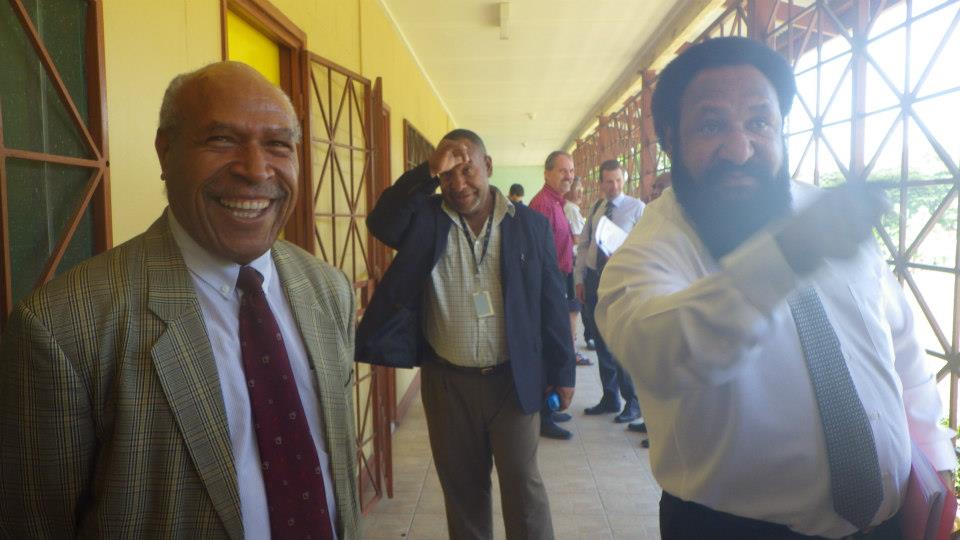 One of the major talking points of the recent PNG Budget Forum was the huge increase in devolved funding to provinces, districts and local level governments. Both Finance and Treasury Ministers speaking at the forum seemed cautiously optimistic and nervous in justifying these funding allocations. On paper, it seems like a large increase to subnational levels of government, up from 5% of the budget in 2012 to 15% in 2013. However, upon reviewing implementation arrangements outlined by the Finance Minister and Treasurer, it is the Members of Parliament (MPs) who have been put at the centre of decision-making power for how this funding will be spent and accounted for at all levels. They are effectively allocating much more funding to their own committees in a large expansion of the District Services Improvement Program (DSIP).

Maybe this should come as no surprise, but have the MPs bitten off more than they can chew by embedding themselves in each layer of project decision making right down to the local level? How will they demand accountability for their projects with limited implementation capacity and what will be sacrificed? This post unpacks the governance and implementation arrangements for the new devolved funding.

Previous blog posts (here) have made reference to the huge increase in devolved funding and have questioned the capacity of sub-national levels of government to spend it but have stopped short at outlining the implementation mechanisms. Fortunately at the recent budget forum, the Minister for Finance, Hon. James Marape, helped fill this gap by detailing (in this presentation available here) the rationale and arrangements behind the K1.5 billion increases in allocations to provincial, district and Local Level Government (LLG) development funds. This might have seemed like endless technical details for the audience but it is critical to understanding how this devolved funding will be spent. For me, it was fascinating, as I have spent several years working on the inside of provincial, district and local level financing systems in PNG.

In justifying these funding allocations, the Finance Minister pointed to PNG’s decentralised but underfunded system of service delivery. The Treasurer, Hon. Don Poyle, backed up these claims in his presentation stating, “It is time to empower our sub-national governments. To trust them. To allow them to serve the people.” While provinces, their districts and LLGs have responsibility for core service delivery, funding has not been sufficient to support these functions. This was a major reason behind sustained increases in ‘function grants’ for recurrent health, education, transport and law and justice services since 2007. The implementation mechanisms for spending function grants (basically through the provincial governments) are very different to the governing arrangements around devolved development funding in the 2013 budget (basically through the MPs).

All of the three new or increased devolved funds will be governed by existing structures. Of the devolved development funding programs in the 2013 budget, DSIP is by far the largest. Each of PNG’s 89 districts is set to receive K10m. This is a sharp increase from the K2 million provided per district since 2008, which itself is up from the just K0.5 million per district provided prior to the resources boom.

Before DSIP was first introduced, the now famous Joint District Planning / Budget Priority Committee (JDP/BPC), or ‘JDP’ as it is known in most villages, existed, but rarely met due to a lack of funding. Since the MP is the Chairman of the JDP, there is a common belief that DSIP is the “Member’s money.” The other members of the JDP are made up of the LLG Presidents, representing the Ward Councillors, with other representatives from community and church groups. There have been widespread reports that MPs used this committee as a rubber stamp, but some were known to operate with integrity. However, no matter the function or the fairness, the MP always had the final say.

Regarding lessons learnt from spending previous increases in DSIP funding, the Treasurer’s presentation conceded that “our monitoring and evaluation systems are non-existent”. Needless to say, little is known about the effectiveness of previous DSIP spending, although a lot has been said about it, ranging from positive examples of rehabilitated social infrastructure to serious allegations of misappropriations. Early findings from our PEPE survey presented at the budget forum showed that of more than 200 schools visited, 25% had received a DSIP project. Just under half of these schools that were allocated a project said they were either incomplete or significantly behind schedule and of these, 41% never expected the project to be completed.

The Provincial Support Improvement Program (PSIP) is a new funding source that will be managed through an existing committee – the Joint Provincial Planning / Budget Priority Committee (JPP/BPC) or ‘JPP’. While this committee has been dormant in many provinces, it is set to become increasingly active, as K5 million per district in each province will be allocated to the JPP. JPPs may favour projects that will benefit the whole province, like rehabilitating a major road network, provincial hospital or high school. However, Governors may also be motivated to fund projects to benefit their own local bases. Of course, whether Governors can dominate, given that other MPs from the province are also on the Committee, remains to be seen. (For readers not familiar with PNG, most MPs (89) represent districts, but one MP (the Governor) is elected for each of the country’s 22 provinces.)

Finally, under the Local Level Government Services Improvement Program (LLGSIP) K500,000 has been allocated to each of PNG’s 313 LLGs. Interestingly though, LLGSIP does not have a separate implementation and decision-making committee. Instead, it will be administered like the DSIP through the JDP. (Each district usually contains about three LLGs). This arrangement means that funding has not really been devolved to the LLG level at all. The Finance Minister stated that Ward Councillors will determine project priorities, but this remains to be seen. Again, it is the MP who will most likely be able to make funding decisions for LLGSIP as well. In any case, it will be hard to distinguish between DSIP and LLGSIP projects.

One benefit of MPs governing these committees could be improved accountability. The MPs would presumably want to see their projects implemented on time and within budget, but who will do this? The answer is the same people who already have their hands full implementing gradually increasing recurrent budgets, essential for improving basic services. They are Provincial and District Administrators who are the Executive Officers to the JPP and JDP respectively and are financially accountable for managing this devolved funding. If the political imperative is to prove this development funding can be spent effectively, it seems inevitable their focus will shift from implementing recurrent expenditure to managing development projects.

The process from receiving allocations in provincial budgets to the successful completion of a project is rarely straightforward in PNG. Identifying projects, submitting proposals for endorsement, obtaining JDP or JPP approval, and then gaining final approval from the Department of Implementation and Rural Development may be difficult and time consuming. The process of tendering and awarding contracts may be even longer, and then funds have to be released and payments made.

In summary, the new changes have put MPs at the centre of decision-making, at the provincial, district and local level. Each MP will become a donor in their district or province with K10 million or more at the disposal of a Committee which they either chair or are a member of. While greater devolved funding may be well intended, it will put more pressure on an already overstretched provincial and district administrative system and risks unintended consequences, such as a diverting attention away from the effective management of recurrent expenditure.

Colin Wiltshire is the Devpolicy Program Manager for the PNG Promoting Effective Public Expenditure Project. He is also undertaking a PhD in the State, Society and Governance in Melanesia Program at ANU.