As anyone who has visited Papua New Guinea (PNG) in the past 20 years can attest, the private security industry is booming. Office buildings are often only accessible by passing by rolls of sharp barbed wire, pointed fences and uniformed guards with large caps. Many who work for donors, international NGOs or foreign embassies move from one secure compound in cars tracked by security companies that deliver them to another well-guarded fortress.

As the industry has grown, so too have stories of violence, theft and other misdeeds by security personnel. In 2018, one private security guard was charged with shooting another dead in a suburban supermarket. Stories about rogue private security guards and operators highlight the importance of regulating this fast-growing industry. In this post, we examine the regulatory framework that applies to PNG’s security firms and discuss the challenges for overseeing this increasingly ubiquitous industry.

To start with, it is important to note that when it comes to regulating private security, PNG is a regional leader: it was the first Pacific island country to attempt to regulate its private security sector and is currently one of only three countries in the region (along with Tonga and Fiji) to have enacted dedicated legislation for this purpose. The Security (Protection) Industry Act 2004 provided for the establishment of the Security Industries Authority (SIA). Set up in 2006, the SIA has now been in existence for 13 years. Its functions under the Act include:

This all sounds good in theory, but the SIA faces a number of significant challenges. First, the agency only provides licences – and thus provides an ostensive level of regulation – to a small proportion of firms. SIA figures from 2017 estimated that there were 219 unlicensed security companies with 7,649 security guards operating illegally, although unofficial estimates from industry sources put the numbers substantially higher than this (with some suggesting that up to 80% of companies are operating without licences or permits). Where the SIA identifies unlicensed companies, it refers them to the Internal Revenue Commission (PNG’s tax authority) as these companies are failing to pay a 10% GST component that is payable on licence and permit fees. 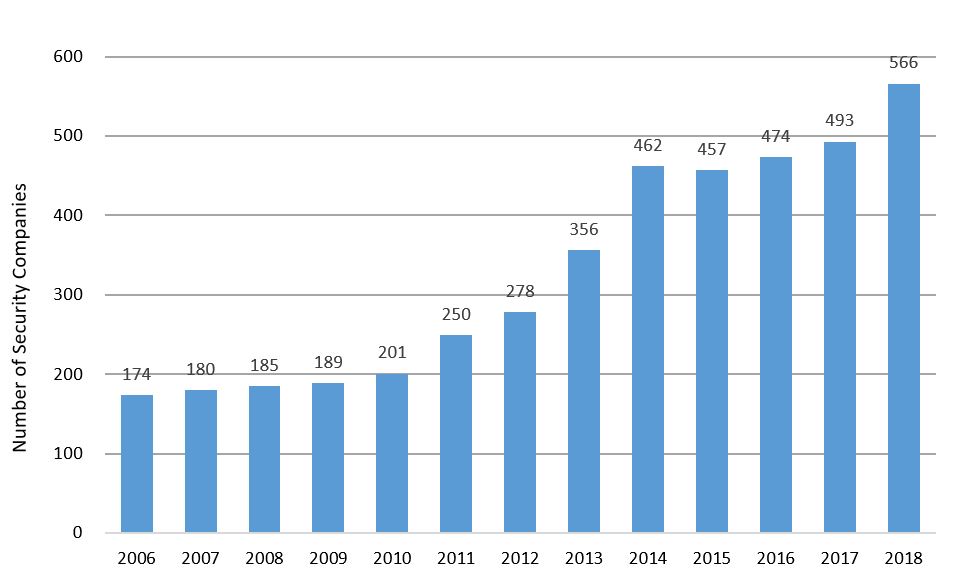 While the number of licensed companies has remained relatively similar over the past five years (the increase in 2018 is likely due to the enhanced security for APEC and the associated construction boom in Port Moresby) the SIA hopes to increase the number of licensed companies. In turn, it has recently opened an office in Lae (comprising two inspectors, a driver and a secretary) that is expected to cover the Momase and Highlands regions.

The SIA has an incentive to issue licences: it gets to keep the fees from each company and security guard it registers. Given the profits to be made in the industry, fees are low, although they provide the SIA with significant funding. For example, a licence for a company with over 200 employees that provides extensive security services – including armed guards and guard dogs, as well as armed escort for payroll and cash-in-transit – costs 11,000 kina (A$4,700) per year.  In addition to their licence fees, companies are charged 22 kina for permits for each security guard they employ. The growth of licensed security companies and guards provides an important stream of revenue for the SIA; in 2018 it licensed over 30,000 guards – a figure that has almost doubled since 2014 (see Figure 2). 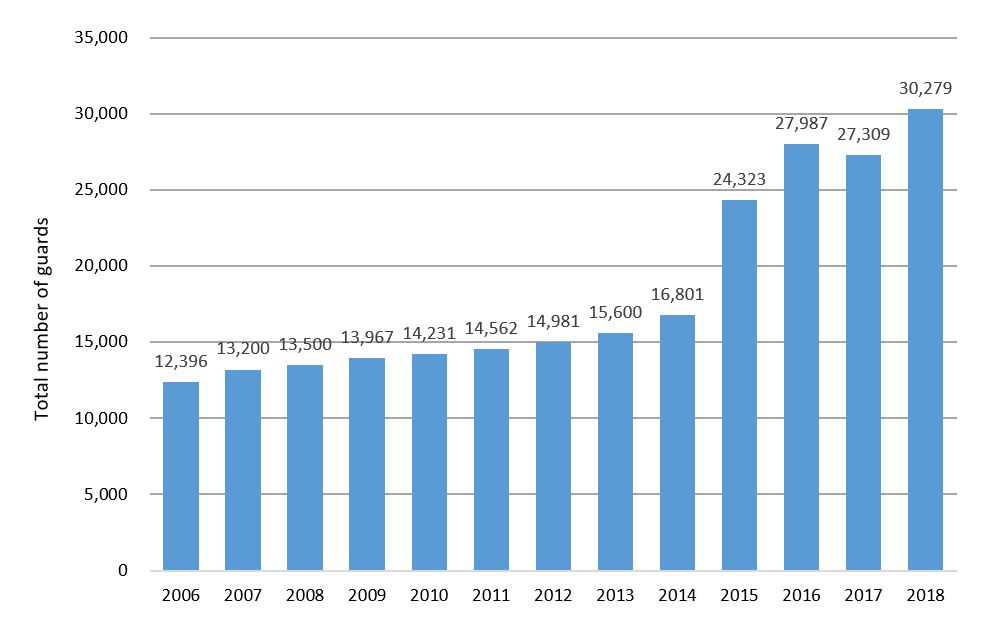 Despite this income, as with many other areas of state regulation in PNG, the biggest practical challenge with this regulatory framework remains the extremely limited capacity of the SIA to fulfil its designated functions. The SIA operates out of a rundown former police building in Badili (a suburb in Port Moresby) and is headed by the Registrar, a former senior police officer. It currently has a staff of around 14 people, which include four regional security inspectors who are each responsible for one of PNG’s four regions (Momase, Highlands, New Guinea Islands and Southern). The New Guinea Islands and Southern regions are serviced from Port Moresby. These resources are woefully inadequate given the rapid rate of growth of the industry. It is not realistic to expect one inspector to regulate the industry in each of PNG’s four extensive and topographically challenging regions.

It is therefore not surprising that many security experts express frustration that the SIA is not living up to its mandate. For example, many bemoan the lack of or inadequate training for security guards, as well as the SIA’s limited powers of enforcement in the face of non-compliant operators.

There is, perhaps, a glimmer of light at the end of this (poorly regulated) tunnel. Amendments to the Security (Protection) Industries Act have been proposed by the SIA to cater for technological developments in the industry (such as the growth of electronic security, and surveillance and tracking technology), to extend regulation to foreign security consultants and advisers working in PNG, to increase fees, and to empower the regulator to prosecute offending companies. While these amendments are welcome, implementing them is likely to prove challenging. This is particularly because many believe the weakly regulated nature of the industry benefits many PNG elites (including politicians) who have financial and other interests in this expanding and highly profitable industry.