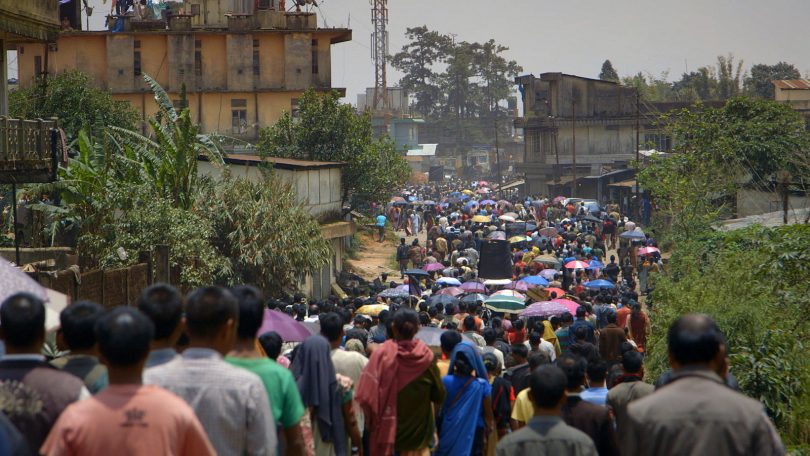 Nepalese migrants cross the border to work in mines in India (ECSP/Flickr/CC BY-NC-ND 2.0)

This is a human as well as an economic story: one in every four households in Nepal has one member working abroad at any given time. Between 2008 and 2017, some 3.5 million work permits were issued.

Top destinations for Nepali migrant workers measured by issued work permits include Malaysia (33.3%), Qatar (19%) and Saudi Arabia (18.9%). India is actually the most popular destination, but work permits are not required.

In Nepal, 81% of workers engage in vulnerable employment (defined as self-employed and contributing family workers) with little or no access to social security) and 30% are underemployed. In 2012, per capita gross national income was US $540. It is no wonder that labour migration has become the favoured income alternative. A critique of labour migration is that it creates a ‘brain drain’; however, in Nepal this isn’t true.  The majority of labour migrants from Nepal are unskilled (70%) or low-skilled (27%), with 40% unemployed prior to departure and 30% from agriculture.

The desire to obtain a better education and create a better life for their children is one of the main motivations for families to engage in labour migration. In Nepal, remittance spending correlates with a positive effect on education spending, increased years of schooling and greater educational opportunities for girls. For health it has been found that remittances directly lead to higher spending on better quality medical care and an increased likelihood of visiting a doctor, increased birth weight, and decreased child mortality. Money remitted back home has proven to be one of the most significant recent contributors (up to 20%) to the overall decrease of poverty at both the household and national level. It has also contributed to the increase in Nepal’s Human Development Index (HDI), which has jumped from 0.29 in 1980 to 0.54 in 2014.

There are three major barriers to maximising the development value of remittances: the high cost of sending remittances, high travel costs, and limited financial inclusion.

Currently the average cost for sending remittances to Nepal is 4.7%, below the 7.1% global average, but still well above the SDG target of 3%. Regulations to curb money laundering and terrorism funding increase remittance sending costs. Lack of competition between money transfer companies also increases costs. The high transaction costs of remittances are extremely regressive, placing unnecessary costs on the world’s most vulnerable workers. They drive remittances underground into informal systems and discourage labour migration. When it comes to remittance channels, only 52% of Nepalese use formal transfer channels, in part because of high fees. However, remittances are far better leveraged for development when they flow through formal channels.

To increase competition, governments can encourage postal services and other distribution networks to facilitate partnerships that will drive the diversification of money transfer options. Governments needs to be careful not to over-regulate and create tedious and unrealistic reporting requirements so as not to discourage smaller and emerging money transfer companies.

To reach their place of work, Nepalese international workers must often pay fees for airfares, recruitment agencies, medical exams and orientation training. There are also often long and costly waiting times for passports and visas. In Nepal, 87% of households have to take out a loan to finance the journey. With the average cost of migration estimated to be US $1,373, on a monthly salary of US $273 it takes approximately five months of earnings to recover that cost. The Nepalese government has put limits on the fees that recruitment agencies can charge, but in reality these are often ignored and not enforced. High migration costs also mean that workers are more likely to consider informal arrangements, which offer very little protection. Trade unions, such as the partnership between the Malaysian Trade Union Confederation (MTUC) and the General Federation of Nepalese Trade Unions, play an important role in protecting Nepalese migrant rights.

Unfortunately, a large majority of remittance-receiving households in Nepal remain unbanked, particularly so in rural areas. Where services are available, they are not varied enough to suit the wide-ranging needs of different households. The lack of financial inclusion is a lost opportunity for workers and the economy, as remittance-receiving households do show a commitment to investing when given the opportunity. To better harness consumption and investment and reduce transaction costs, greater financial inclusion must be prioritised.

With remittances significantly outweighing ODA, donors should support remittances through reducing the costs associated with international work and driving financial inclusion. As the example of Nepal shows, remittances are a lifeline for many families, but there is much more to do to maximise their potential impact.

Bronwen has just completed a Master of Development Studies at Melbourne University, and is currently based in Bangkok with ECPAT International.