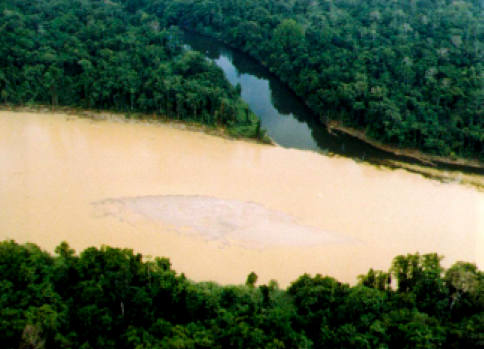 This is a guest post by John Burton, a Fellow with the Resource Management in Asia-Pacific Program (RMAP).

The Ok Tedi mine is well-known for its disposal of mine tailings into the local river system (Fig. 1) which led to international litigation and ultimately to BHP Billiton quitting the project. People argue to this day about the balance between the economic benefits to be had from keeping the mine open (to local people and central government) and the impacts on people and the environment (felt by local people on their own).

Among the business voices who came down against the continuation of mining were the World Bank (‘the Ok Tedi mine needs to be moving towards closure as soon as possible’, Country Director, Papua New Guinea, to Sir Mekere Morauta, 20 January 2000) and BHP itself, whose then Chief Executive Chip Goodyear said in 2004 that his company could no longer be involved in projects of this nature and that Ok Tedi ‘was not a development of which BHP Billiton was proud’ (The Age, 16 July 2004). The industry-sponsored Mining, Minerals and Sustainable Development project used it as a case study, reporting the above points of view, but not coming to a definite conclusion either way.

Obviously the Papua New Guinea government, a minority share-holder, did not agree and it is now nearly a decade since BHP pulled out, quarantining its majority shareholding in a Singapore-based company, the PNG Sustainable Development Program Limited, whose Chairman is well-known in these parts, being a Visiting Fellow in the Crawford School.

The intriguing thing about the mine’s operator, Ok Tedi Mining Ltd, is that from its formation in the early 1980s, it has never been a public company and has largely escaped the scrutiny of annual reporting faced by listed entities. It issues a ‘Summary of Annual Results’ and an ‘Annual Review’ rather than a report that is called an ‘Annual Report’. And it has been awfully slow in attempting any kind of sustainability reporting, all the rage in the rest of the mining industry these days.

I have been meaning to write about OTML’s, and now PNGSDP’s, efforts in this area for some time, but have been putting it off because as Miss knows there is only so much you can write in Johnny’s school report if Johnny’s achievements are, shall we say, underwhelming.

In its 2006 Annual Review, OTML announced that it was ‘appropriate today to adopt the reporting of key GRI (Global Reporting Initiative) indicators in line with the environmental performance reporting of mining and other industries throughout the world’, and referred reader to a table. There are 30 Global Reporting Initiative environment indicators, EN01 to EN30 in the G3 Guidelines, of which 17 are ‘core’ and 13 ‘additional’, plus three new ones in the recently issued Mining and Metals Sector Supplement.

Parsing the said table, promisingly headed ‘Global Reporting Initiative’, in search of them, only four vaguely match anything the GRI asks for – dealing with water use, disposal of wastes, diesel consumption and greenhouse gas emissions – but they are not the same, do not carry the GRI identification numbers, and do not supply the information the GRI requires reporters to give.

And that’s it.[1] The GRI says that to achieve its lowest standard, a minimum of 10 of its total of 79 indicators must be reported, including at least one from each of the social, economic, and environmental groups. OTML’s claim to have adopted GRI reporting just doesn’t stack up.

The GRI environment indicators have been carefully thought out and include the like of ‘EN12 Description of significant impacts of activities, products, and services on biodiversity in protected areas and areas of high biodiversity value outside protected areas’ – something that you might think material to report, given that the UNEP thinks the mine-impacted Fly River has the most diverse freshwater fish fauna in Australasia. No prizes for correctly guessing that OTML omitted it.

In its 2007 Annual Review OTML used subtly different wording to hint that as well as reporting some GRI environment indicators, it might be about to report on economic, labour, product responsibility, society, and human rights indicators as well. But it didn’t, and in 2007, 2008 and 2009, even the phrase ‘Global Reporting Initiative’ is missing from the purported indicator table.

OTML’s feeble effort raises the question of what sanctions can be raised against organisations that make false claims about GRI reporting. The International Council on Mining and Metals has one answer: to have a membership list and to commit companies on it to a series of compliance targets, notably public reporting using the GRI G3 + MMSS standard, further scrutinised with a league table. It is an irony that BHP Billiton, OTML’s original majority owner and an ICMM member, has gone on to do very well on this table, being one of five companies worldwide in 2009 to tick all the boxes properly.

A more general answer is not to hand. OMTL and the PNGSDP are among the three quarters of the approximately 50 companies that make up the PNG resources industry to ignore sustainability reporting, and with the failure of Canada’s bill C-300 in 2010 and Australia’s Mining Certification Evaluation Project some years earlier, which would have at least made the 17 that are domiciled in Canada or Australia to do GRI reporting (and one or two other things), international encouragement to move in this direction has faltered.

I return to the original question: do the impacts of mining at Ok Tedi outweigh the benefits?

My answer is that we have no evidence to judge objectively. For the first part, the impacts, OTML committed funds in 2005 to a multi-year programme of monitoring and evaluation led by RMAP, building on similar work in the 1990s to which three members of RMAP  contributed, but for reasons only known to itself, scrapped it at the last minute. We do know that mine closure planning studies have been undertaken, but my February 2010 inquiry in respect of a dead web site link to an advertised report drew the response that it was ‘huge’ and would be up ‘in the next few weeks’. A year later, the web site still points to nothing.

For the second part, the benefits, PNGSDP’s mission statement is to use all its Ok Tedi income for development assistance, but it does no sustainability reporting, despite its name. 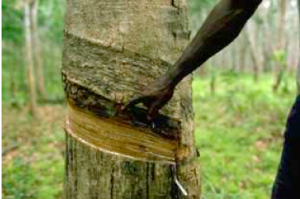 Fig. 2. An underproducing rubber tree near the Fly River in 1994.

We may congratulate PNGSDP on protecting its $1bn investment portfolio from the effects of the GFC – no mean feat – but when it says things like ‘we completed planting 1,600 hectares of rubber in the Lake Murray region of the Western Province engaging 1,246 families in the process’, what evidence do we have that it not just throwing money at a sector known only in the last 50 years for its capacity to lighten the wallets of willing donors?

A financial measure of aid effectiveness is the proportion spent on administration, about $11.5m in 2009, to that spent on development projects, about $40.9m in 2009, or about 22% of the total. (It also managed its investments, but the cost of doing so was calculated separately.) I don’t know whether this is reasonable or not, but a comparison is that in 2009-10 AusAID’s administration budget was under 5% of its development assistance.

It may well be that PNGSDP does exemplary project evaluation, such that it can tell the good it does outweighs the harm done to the environment by mine wastes. If it does, why not report it? The longer it won’t hand its homework in, the longer Miss will go on saying ‘Johnny has demonstrated limited achievement of the knowledge, skills and understandings expected’, because we have no way of telling otherwise.

John Burton is a Fellow with the Resource Management in Asia-Pacific Program at the Crawford School. His article follows a Pacific Research Colloquium held on 7-10 February by State, Society and Governance in Melanesia and builds on RMAP’s previous interest in this mine in the 1990s as detailed in The Ok Tedi Settlement: Issues, Outcomes and Implications, Ballard and Banks eds, and in their archive.

[1] A Google trick is to confine a search to a single web site using the form ‘xyz site:www.website.com’. A search on OTML’s website for ‘GRI’ returns no hits at all.

John Burton is an Honorary Senior Lecturer with the Department of Pacific Affairs at the Australian National University.