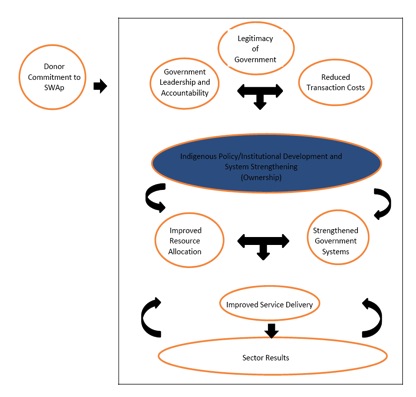 Health aid has been the subject of an intense analysis, contestation, and improvement effort over the past 20 years.

A key driver of this interest has been the rapid growth in the volume of health aid – increasing from $5.6b in 1990 to nearly $28b in 2011 – and the proliferation of agencies delivering health aid – over 40 bilateral donors, 26 UN agencies, 20 global and regional funds, and 90 global health initiatives.

A recurring theme in the analytical commentary of health aid over this period has been a constant search for improved effectiveness.  The dominant discourse of the mid 1990’s was the inefficiency and detrimental impact of project modality.  This laid the foundation for the development of a new, more hopeful approach to health aid delivery – that of Sector Wide Approaches (SWAps).

SWAps offered the prospect of health aid being more efficiently provided through processes that were aligned and harmonised both amongst donors, and with Government systems.  They offered the prospect of a more holistic approach to financing that encompassed and linked capital and recurrent budgets.  They promised to reduce the burden on government officials of managing the often competing and onerous demands of donors.  And most importantly, they sought to increase the effectiveness of health aid in improving health services and outcomes.

The attached Development Policy Centre Review Paper [pdf] critically tests whether the potential of health SWAps has been realised.

In essence, the paper asks if health SWAps, as conceived and implemented, are an effective form of aid.  It concludes that overall the performance of health SWAps  is, at best, mixed.  The key insight offered by this paper is that a divergence has developed between the strategic intent of SWAps and their implementation.   The paper argues that while the theory of change underlying SWAps is highly-consistent with effective aid, in practice the approach has failed to realise this potential.

The theory of change underpinning SWAps is premised on the aid effectiveness principle that robust, legitimate institutions are central to the sustainable development of effective health systems, and that these institutions will only develop through deeply-embedded local, political and cultural contestation and processes. Conceptually, SWAps are intended to facilitate the emergence and development of these institutions by removing the damaging effects of project aid, and creating the space, incentives and accountability for government to lead and own the development process.

However in practice, health SWAps have diverged from this underlying idea.  The empirical evidence of health SWAp outcome and impact benefits is inconclusive, but clearly process- level performance has been suboptimal.  The most successful process-level stream of SWAp practice appears to be the production of SWAp architecture: national plans, expenditure frameworks, sector coordination mechanisms etc. However there is evidence of uneven quality of and adherence to this architecture, and importantly limited evidence that this architecture has contributed to other desired process level benefits of SWAps – namely, improved harmonisation and alignment, reduced transaction costs, increased sector stewardship, and most importantly, improved equity and coverage of front line service delivery.

In support of this conclusion, the paper traces the history and rationale of the development of health SWAps, and critically reviews the growing body of performance evidence.   A core stream of this analysis is the technical shortcomings within the SWAp architecture itself: poor quality of plans/expenditure frameworks, capacity constraints, partnership difficulties, and resource blockages.  The paper argues that this analysis is valuable but insufficient to understand the reasons for the limited success of SWAps.  Rather the paper finds that there are a range of incentives among donors and governments that have so constrained the implementation and understanding of SWAps at a process level, that it is possible to argue that they have not been implemented as they were intended.   These incentives include:

There is no magic bullet to overcome this situation.  It is certainly not the intention of this paper to suggest that SWAps should be disregarded. On the contrary a key theme of the paper is that the key challenge is how to return to and operationalize the underlying idea of health SWAps – rather than continue to tinker with and refine the emergent architecture-driven practice that has come to define SWAps.

Thus the paper concludes with a possible approach for moving forward which attempts to move aid away from current SWAp practice while realigning health sectoral aid with the theory of change underlying SWAps.  This approach builds on the aid effectiveness framework and purposefully tries to account for some of the incentives and understandings that have cut across SWAp implementation to date.

The essence of the proposed approach is a more realistic understanding of the nature of health systems, combined with a more politically-informed set of strategies to support the development of these systems.  In terms of health policy/ resource allocation, a more iterative, evidence-based, and politically grounded approach is suggested.  In terms of delivery modalities, the approach advocates the use of government systems (be they regulatory, financial or delivery) as a priority (including budget support), but only to the extent that capacity, commitment and performance suggests this is warranted.  However rather than leaving projects to fill the void when government and donor systems struggle, donors are encouraged to coordinate around a number of ‘hybrid’ sector delivery mechanisms for aid delivery.  These mechanisms should unobtrusively, efficiently and accountably provide inputs at the service delivery level (be that government, NGO/faith based, or private providers) alongside government financed/ provided inputs.

The overriding intention of this approach is to provide the space, opportunity and incentives for government to lead sustainable, organic, sector development processes, and for donors to be able to play a more efficient, strategic supporting role.  The achievement of this would elevate health SWAp  practice to sit alongside health SWAp theory as being consistent with contemporary understandings of effective aid.

Andrew McNee is a Visiting Fellow at the Development Policy Centre at ANU. He has more than 20 years development experience including over 10 years of direct experience – in a variety of roles – in the design and implementation of a health Sector Wide Approach (SWAp) in Papua New Guinea.