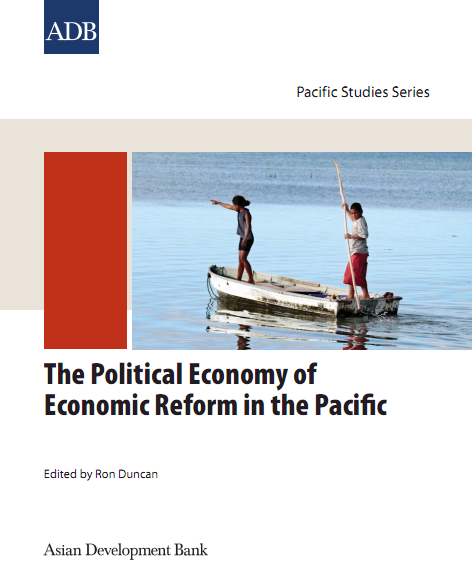 Review: The Political Economy of Economic Reform in the Pacific

The following is a review of “The Political Economy of Economic Reform in the Pacific”, edited by Ron Duncan and published by the Asian Development Bank as part of the Pacific Studies series.

This collection, as already canvassed, collects material arising out of a number of academic research projects based around the theme of how the political economy of Pacific island countries (PICs) affects, whether positively or negatively, attempts by governments in conjunction with development partners (in this case aid agencies) to effect economic reform.

The collection draws on differing academic disciplines and covers significant territory, both in terms of geography, with almost all parts of the Pacific island region discussed at various junctures, and subject matter. Papers address a diversity of topics including telecommunications in Papua New Guinea and Tonga (‘Ofa, chapter 4), the nexus between logging and political dysfunction in Solomon Islands (Allen, chapter 12) and the significance of sugar rents in Fiji (Chand, chapter 15).

The rationale underpinning the research is that, recently, aid agencies have come to the understanding that in order for proposed reform to be effective, it is necessary to commence reform activities equipped with a detailed and nuanced understanding of the political economy of the developing country which is to be the beneficiary of the negotiated aid assistance.  This is not a new concept [pdf] and neither is it one that is specific to development work carried out in the Pacific. This prompts the question of whether the material presented here does the job of assisting development agencies in understanding the political, economic and cultural contexts of individual countries in the region. More particularly, this volume seeks to remedy the perceived deficit of practical applications within a reform framework that a better awareness of political economy issues can and should inform (Duncan, p. 6).  In this way, the authors of this collection seek to apply academic rigour, both methodological, whilst recognising the need of development practitioners to have tools and methodologies that can be applied on the ground in what are often very challenging circumstances.  This objective is achieved to a limited extent.

There is general agreement among the authors that meaningful and sustainable reform depends upon, among other things, identifying suitable champions (who may or may not be located within government) and establishing ownership of reforms in the wider community.  However, there is little advice provided as to what to do if it is proving difficult or impossible to identify a reform champion and whilst there are some very good suggestions as to methodologies for engaging with the wider community (e.g. use of national summits) there is little to assist those struggling with the logistical and cost challenges associated with this type of activity that are at best challenging and at worst insurmountable.

The collection is written very much in a traditional academic style. This is “hard” research, as differentiated from a “soft” approach which might well lead to similar conclusions but not necessarily satisfy the criterion of methodological rigour. It is meaningful and appropriate that a collection that is intended to provide assistance or guidance to aid agencies take a robust approach in this area.

As always with a collection of this type, there are some fascinating ‘nuggets’ hidden away that really bring writing of this type to life. My particular favourite is the revelation that shortly after East Timor became independent, its citizens were invited, by means of an aerial leaflet drop, to put themselves forward as members of the judiciary (p 242).

The material that is presented here addresses not only the specific questions posited as the basis of the research but also leads to issues that are more wide-ranging and fundamental. First, though most of the countries of the Pacific are small in terms of population and size of economy (PNG is the notable exception), it is crucial to accommodate (both at design and implementation stages of proposed reform programmes) for the fact that each country is different and that the relevant aspects of political economy cannot and should not be generalised between countries or at (sub)-regional level.

This work is very particular to acknowledge and illustrate this fact and it has recently been highlighted elsewhere.  It remains the case that each PIC is a complex environment in its own right and those working in the area of supporting reform need to ensure that they are cognisant that this complex environment is different from that complex environment. Secondly, is the issue of the political economy that informs the culture of the aid agency seeking to promote reform within a given PIC.  This receives some attention here in the chapter focussing on achieving revenue reform in the Pacific (Cotton, chapter 8 ) in which the author explores, among other things, how a lack of shared understanding about the nature and predicted impacts of reforms can impede the efficacy of a reform programme. However, it is an issue that requires more attention; development partners ‘arrive’ with norms and expectations deriving from their own political and cultural framework and negotiating the ongoing relationship between differing and sometimes conflicting beliefs and practices is an activity that is more than simply appropriate; it is crucial to effecting meaningful change.

Finally, the most significant issue to come out of this collection (for me anyway) is the importance of environmental enabling in the sphere of promoting pro-reform political economy in PICs. This endeavour is something akin to pasture improvement — it takes a long time and its results are not always completely predictable. Promoting and supporting the work of civil society, whether in engaging communities in relevant discussions, particularly those relating to policy development, or providing safe yet challenging environments in which Pacific island leaders (or potential leaders) can share experiences and benefit from peer support, does not always fit with a technocratic model of aid assistance, especially because it is not always straightforward to measure the impact of this type of activity, let alone make it ‘sustainable’.  However, if it is accepted that the political economy of PICs is crucial to the effectiveness of economic reform measures, it is undeniable that it is these types of environmental enabling interventions (which by their nature need to be organic and long-term) which will be of most significance in terms of modifying the political landscape of PICs into the future.