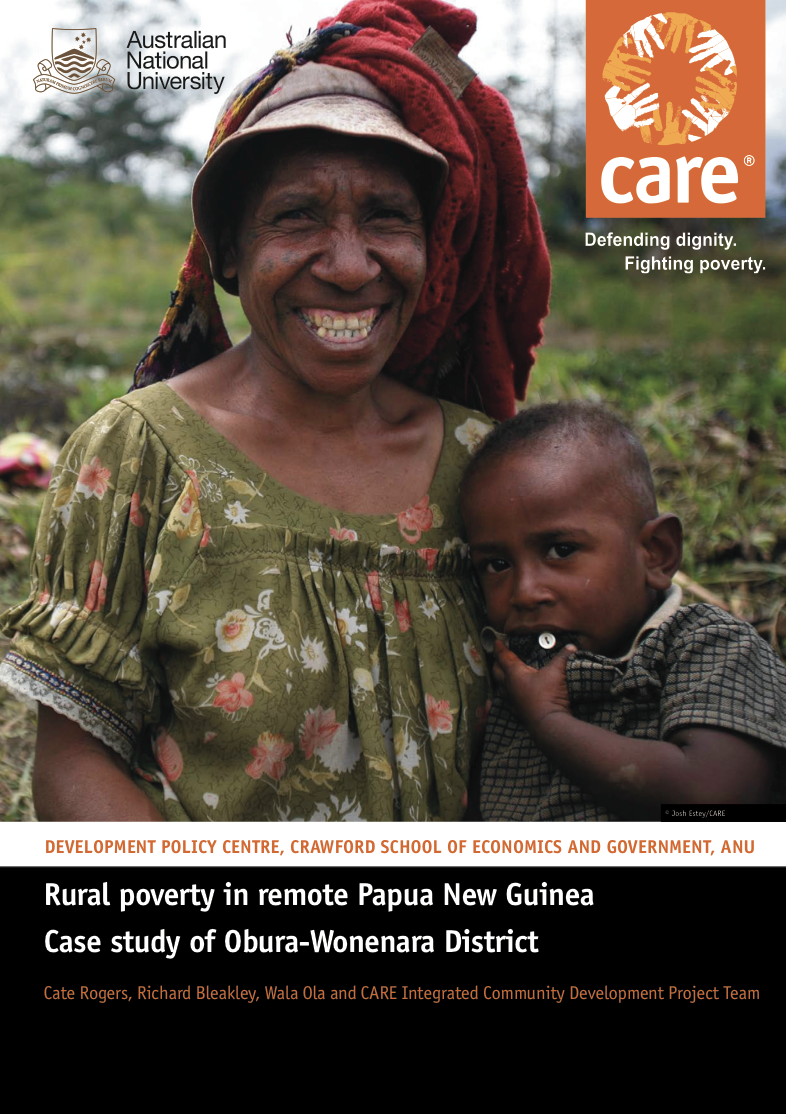 On Tuesday this week the Development Policy Centre and CARE Australia launched a joint report[pdf] on a case study of rural poverty in remote Papua New Guinea.  The report draws on data from a baseline study conducted by CARE for a project that seeks to build the capacity of people in these communities to gain access to the services and facilities that will help secure their livelihoods.  The data paints a bleak picture of a vulnerable population, with very few resources to fall back on when illness or other shocks hit.

Yelia Local Level Government Area is in Obura-Wonenara District in Eastern Highlands Province. Part of the district is accessible only by air, with the remainder having limited road access. Villages are spread out, with groups of up to three households separated by a 20-30 minute walk. The closest markets are in Menyamya, which is a two day walk away from some parts of Yelia.

In Yelia, the majority of households live within 60 minutes walk of a health facility. The schools that are available in the district are community schools that go up to Grade 6.  One of the four clusters surveyed had no school. Here parents said that they would send their daughters away so they could attend school. The other clusters had access to schools but often without qualified teachers or classroom materials, and with overcrowded classrooms.

The limited amount of research on poverty in Papua New Guinea, spanning the early 1970s to the early 2000s, suggests that Obura-Wonenara has consistently been amongst the most disadvantaged districts in the country. But what does disadvantage mean in Yelia?  Well, for starters it means that there are more children and old people for families to support than on average.  The dependency ratio of those surveyed was 94 per cent for children, rising to 102 per cent if older age groups were included. In simple terms, ratios this high mean that in a subsistence environment a lot of effort must go into meeting the basic needs of the family before it is possible to try to accumulate a surplus.

Amongst the population surveyed, there was very little education. Seventy one per cent had no schooling at all. Of those who did access schooling, men had slightly higher rates of schooling then women. The literacy rates showed that only 19 per cent of women and 36 per cent of men could read.

The data on nutrition, if representative, raises the possibility that this population is chronically malnourished.  Fifty eight per cent of those surveyed had eaten two meals in the day leading up to the survey and 25 per cent had consumed one meal.  Meals mainly consisted of sweet potato (the staple), followed by banana and taro.  Over 90 per cent of the households surveyed had not consumed animal protein and three quarters had no vegetable protein.  Overall, the data suggested that diets had limited variety, lacked animal and vegetable protein and essential fats. Children with mild or moderate malnutrition are between 2.5 and 4.6 times more likely to die then their healthy weight range counterparts.

Data on health indicators, including maternal and child mortality are notoriously difficult to collect in household surveys.  Ideally, this kind of information is captured in demographic and health surveys with specialised questionnaires and sampling approaches, so it is important to be careful in interpreting results.  In Yelia, it was not possible to get an accurate estimate of maternal mortality.  For under five mortality the rate of actual deaths reported was 191 per 1,000 live births.  This should raise alarm bells even if it is not strictly comparable to official statistics.  If we compare this figure to under five mortality rates by country, it would be the highest figure in the world (see here).

Participative poverty assessments have found that it is possible for entire villages to be below the poverty line and still think of themselves as coping.  In this context, the focus is more likely to be on securing a livelihood rather than maximising income.  In Yelia the focus is likely to be on securing sufficient food. Amongst those surveyed, 75 per cent of households indicated that food security is an issue for them. They mentioned it being a particular problem when there was an extended dry season (June through to September) and while they were waiting for gardens to establish (December through to March).

The main threats to food security are environmental, for example excessive rainfall or drought, or local issues such as violence or disease.  When asked about the most frequently experienced disaster, 70 per cent nominated prolonged heavy rain. This was known to cause destruction of assets such as food gardens, bridges and houses.  Yet, of the responses that related to disaster preparedness, the majority focused on preparing for drought and water stress.

One response to food security issues is to use cash to purchase food.  In a remote environment such as Yelia, cash to purchase supplementary food can also play a vital role in addressing malnourishment.  However, in Yelia there are very few opportunities to earn cash.  Of those surveyed, 7 per cent of men and 1 per cent of women had formal sector employment.  Around 14 per cent were engaged in micro-enterprises.

While coffee provided income opportunities for some, very few were gaining reasonable incomes from it.  When asked about income earned in the preceding month, which coincided with coffee sales for the year, 76 per cent of households reported earning less than 100 Kina (around A$45).  Incomes from coffee sales are sensitive to the differential between coffee prices and air-freight charges (the only way to get coffee out of these areas to markets is by air). If the coffee price drops sufficiently it becomes uneconomical to sell coffee.  Recent reports suggest this is the case now, and there are reports of unsold coffee accumulating in remote locations.

Overwhelmingly, the data from Yelia point to a community that is chronically disadvantaged.  In addition, it seems that the population face high levels of risk, particularly to their food security. This is exacerbated by isolation, the lack of alternative income sources, and the lack of options afforded to them through their low levels of education.

The research in Yelia highlights that there is still much that we don’t understand about the circumstances faced by people living in remote rural communities in Papua New Guinea.  Of particular concern is that we don’t have accurate data on maternal mortality rates (Note: the data collected in the DHS conducted in 2006 is considered unreliable).  We also don’t have accurate data on infant and under-five mortality.  On the issue of nutrition, the last study of malnutrition in children in Papua New Guinea was almost thirty years ago.

So, while data from small-scale surveys such as that conducted in Yelia give us indications that the levels of disadvantage are higher than out-dated national figures suggest, it would take serious efforts to confirm this.  There is a strong case for reliable national data that would provide important and meaningful benchmarks for progress in addressing disadvantage.

There is also much more that we should understand about the risks and coping mechanisms of people living in remote rural places like Yelia.  Elsewhere in the world, this kind of understanding has opened up policy discussions around how to reduce and manage risk while at the same time not undermining communities’ capacity to “cope”.

Broad policy prescriptions to address disadvantage in PNG have been outlined in research dating back to the early 70s.  They have included geographical targeting of poverty programs, better and more roads, addressing the supply and demand side of education and, of course, provision of better access to a full range of health and medical services.  This report, which focuses on one among many poor remote rural communities in Papua New Guinea, should be a call to action to government and civil society that these communities should not be overlooked just because they are out of sight.

The baseline survey was part of CARE’s Integrated Community Development Program which is funded by AusAID.