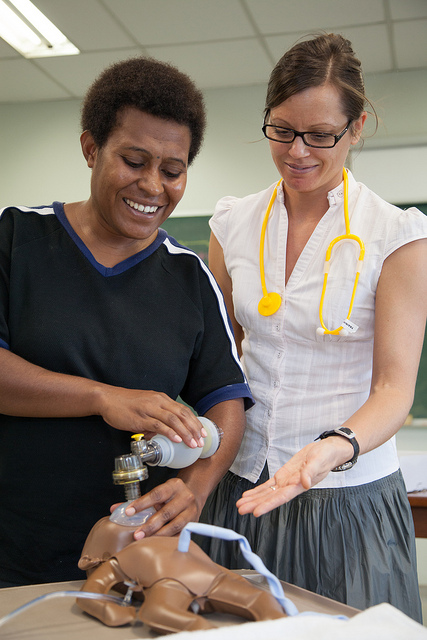 In an earlier post, I outlined the merit of an alternative model of training that might replace elements of the hefty Australian scholarship program. Building on the model of the innovative, large-scale American Medical Education Partnership Initiative (MEPI), Australia could and should develop a new cost-effective, catalytic, large scale program that can build national health systems, empower women, strengthen regional universities and also make itself obsolete in a decade.

There is precedent in that the Australian government has already used elements of this in-country capacity strengthening model – especially in the health sector. It has supported the UTS WHO Collaborating Centre for Nursing, Midwifery and Health Development to provide in-country nursing and midwifery training in some countries in the region. Australian aid has provided financial support to the Fiji School of Medicine (now part of the College of Medical, Nursing and Health Sciences at Fiji National University) and to the University of Papua New Guinea School of Medicine and Health Sciences for years. More recently, the aid program has supported a growing relationship between ANU’s Crawford School of Public Policy and UPNG’s School of Business Administration to build economics-related teaching and research – a program that includes placement of academics.

This model of engagement is also in line with the WHO’s new Global Strategy on Human Resources for Health, which emphasises the education pipeline.

One of the pillars would have to be country ownership and alignment with local priorities. Each possible destination country (most likely through the Ministry of Education and/or Health) would have to be approached and asked if they thought that their country would benefit from an educational partnership and, if so, would it be for nurses, doctors, public health training or some other area of the health workforce (including post-education clinical training and continuing professional development – a particular need in the Solomon Islands, Kiribati and other countries that train their medical students outside the country and indeed often outside the region). The country would then select the local university or institution to be the primary partner.

An Australian partner would be identified for each country and the collaboration would be one of perhaps ten years – sufficient time to build a true partnership, to build capacity, to gain trust and to position Australia as a source of assistance and friendship. Australian institutions would send staff to the partner institution for six months or a year at a time; lecturers from the LMIC institution would come to Australia to develop teaching skills and broaden their technical expertise; student exchanges might be a possibility to broaden the partnership; joint research would be sought. An additional component would be in-country or in-region scholarships to ensure that committed young people are able to access the improved health worker training, irrespective of financial status.

Importantly, the expectations would have to be driven by local realities and local best practice, rather than artificially imposing Australian standards where not relevant. While some countries might embrace Australian standards, others partner countries might prefer something different. For example, Timor-Leste has – at least to some degree – developed a model whereby doctors do more community outreach and prevention work than would be seen in Australia.

Some Australian partners have already built enduring health education partnerships in the region. As noted above, the UTS WHO Collaborating Centre on Nursing, Midwifery and Health Development has spent ten years strengthening the nurse workforce of the Pacific through training and mentoring. The University of Sydney has had a long partnership with institutions in Vietnam, providing training and mentorship in the health fields. The Burnet Institute is building the public health program at UPNG.

One of the critiques of this model is that Australia would not benefit to the same degree as it does through Australia Awards in terms of soft diplomacy. But the partnerships could certainly be clearly branded, and the presence of Australian teachers would mean that a much larger number of young Indonesians or Fijians or Burmese would absorb Australian ideas and values.

Providing greater opportunity to health workers has a particular gender impact as well. First of all, women would likely benefit from improved health services. Secondly, women are prominently represented in the health workforce in most countries so better education and more educational places would benefit women. And the opportunity to impart values of gender equity to a larger group of students could have catalytic positive impacts. Indeed in my current research, we heard from a young male Kenyan doctor who honestly stated that it was not until he learned from Australians that he regarded his female counterparts as equals.

And of course Australia and Australians would benefit from this model as well. Building on the New Colombo Plan model, Australians would be able to spend time in neighbouring countries, learning with their peers – whether students or academics. Australian soft diplomacy would be at work not among a few thousand scholarship beneficiaries, but a much broader group of young people. Rather than spending $60,000 (and usually more) for one student, those funds could support the education of tens or hundreds of young midwives, nurses, doctors and public health officers.

This model does carry greater risk than the status quo. Ongoing support, for example, to the UPNG School of Medicine has not stopped the health sector in that country from falling apart. Indeed, health worker training by itself – without parallel investments in health system functioning – will not be a panacea. But if the Australian aid program is serious about value-for-money, innovation, national interest, and health systems, this type of transformational model needs to be considered.

Joel Negin is Associate Professor of International Health and Deputy Head of School at the School of Public Health at the University of Sydney. This is the second in a two-part series on a new model of health workforce training; the first post can be found here.