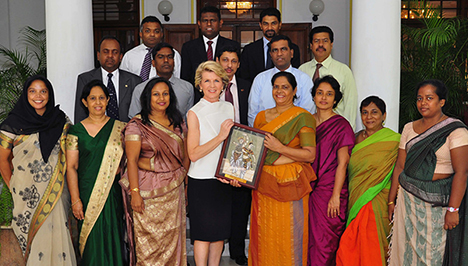 Part One: Scholarships and their place in the aid program

Scholarships are a large and growing part of the Australian aid program. In the 2007/08 budget, almost $100m was spent on scholarships, making up 5% of Australia’s total Official Development Assistance (ODA). In the 2014/15 budget, $310m has been allocated, representing 6% of total ODA. ‘The 2014-15 development assistance budget: a summary’ affirms that Australia will offer more than 4,500 scholarships and fellowships to “build skills to contribute to economic and human development and foster links between Australia and countries in our region.”

Using OECD DAC data, we can see that Australia has spent more on scholarships as a percentage of total ODA over 2010-2012 than comparable donors such as the UK, Canada and Japan. 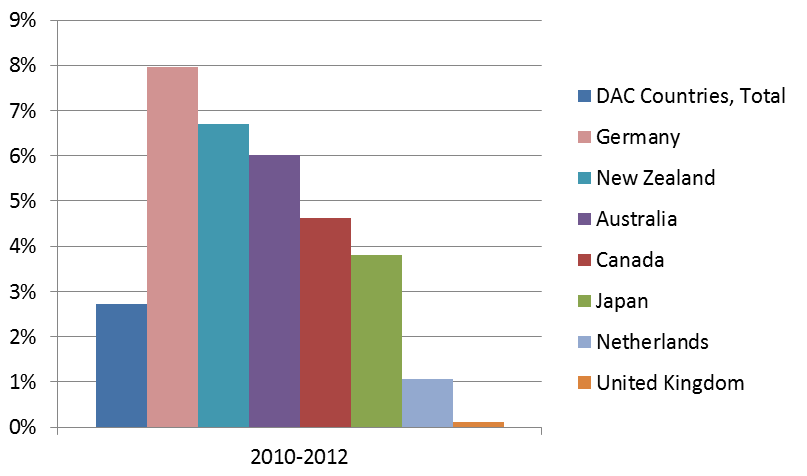 What exactly are scholarships, as provided by the Australian aid program? Most would immediately think of support for masters level study at Australian universities with funding for tuition, living expenses, visas, flights and health cover. Scholarships also cover some PhDs at Australian universities. In addition, there are an increasing number of short-term fellowships offered, whereby individuals from low and middle-income countries (LMIC) study and receive professional development in Australia for two weeks to twelve months on a specific topic, without completing an accredited degree. The Australian aid program is also now offering short courses delivered in these countries.

Given the prominence of scholarships as part of the aid program, it is important to examine the various benefits and critiques of this approach to aid delivery.

Scholarships clearly provide a tremendous and life-changing potential opportunity for individuals from LMICs to learn new skills and apply them at home. Thousands of young people from around the world have studied in Australia and gained important skills, as well as learning about the Australian way of life. Anecdotes abound of students who studied in Australia ascending to positions of power and influence in their home country: Indonesia’s Minister of Finance and Minister of Foreign Affairs; the Solomon Islands Prime Minister; the Permanent Secretary of Health in Mozambique.

Beyond individual advantage, research also suggests that there are broader societal benefits that may result from scholarships, including advancing economic productivity, and the promotion of democracy and human rights.

Scholarships to study in Australia are a potential tool to express “soft power” [pdf], perhaps through personal affinity or through a developed understanding of Australian thinking and action. Fostering links has become a core objective of the Australian scholarship program and the Foreign Minister has explicitly asserted that the outgoing scholarships for young Australians heading to Asian universities are part of a soft power strategy.

A first critique of scholarships centres on breadth of impact and cost-effectiveness. Focusing on in-Australia study, a 2011 Australian National Audit Office (ANAO) report [pdf] stated that “there is good evidence that this (funding for in-Australia tertiary scholarships) is at the expense of more cost-effective in-country and in-region training … which yield much higher development returns.”

One scholarship can cost the aid program more than $100,000: two years of masters level study plus living allowances. And the cost of managing scholarship schemes is very high. In the African context for example, for both masters awards (242 in 2014) and short-course awards (more than 450 in 2014), DFAT staff and managing contractors have had to engage with government departments in more than 40 countries, sift through more than 7,000 applications, organise applicant interviews, and then arrange travel, visas and logistics for about 700 successful applicants. An early iteration of the managing contractor human resources plan for African scholarships had 59 team members.

Furthermore, the link between scholarships and poverty reduction can be questioned, noting that scholarships do not generally target the poor and only directly impact a relatively small number of people. Indeed, stories of children of government ministers securing scholarships continue to circulate.

A second critique is that some of the biggest beneficiaries of the scholarship program are Australian universities who capture substantial portions of the aid funding in the form of fees. Universities, such as my own University of Sydney, welcome a good number of aid scholarship recipients each year, paying full international student fees. An additional component of their scholarship goes to property renters. In this way, much of the aid dollar remains in Australia. Given that masters and PhD scholarships are almost exclusively reserved for those studying at Australian universities, this represents a form of tied aid.

Lastly, as noted in a 2011 post on this blog and in a similar post from 2013 on Crikey, the scholarship program has “struggled to prove its effectiveness, with little evidence of its impact beyond anecdotal evidence of individual success stories.”

While the monitoring and evaluation of the scholarship program has been strengthened over recent years, evaluating scholarships is very tricky. Long time frames are needed to assess full impact and the counter-factual of what the individual would have done without the scholarship is impossible to assess.

These are big, important questions for the aid program. Most would agree that scholarships have a role to play in an Australian aid program but questions of effectiveness, delivery models, recruitment procedures, fairness and value for money are all fair veins of examination by those interested in our aid policy. With that in mind, the second part of this series will examine some emerging results from research that we have conducted among Australian scholarship alumni in three African countries.

This is the first in a three part series on the effectiveness of scholarships in the Australian aid program, collected here.