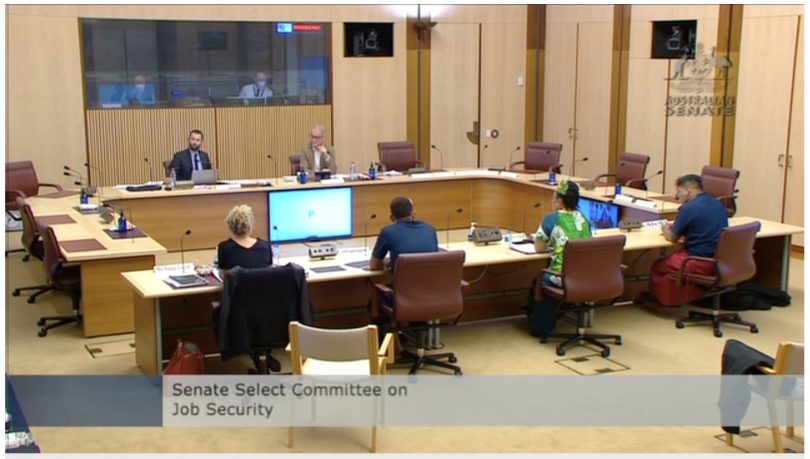 Last month, the Australian Senate Select Committee on Job Security held two hearings into the Seasonal Worker Programme (2 February and 10 March). The first hearing featured four SWP workers (two from Vanuatu and two from Samoa) who alleged exploitation under the program. Their claims (summarised here) produced outrage from the senators conducting the inquiry, and have since been widely reported. They included poor accommodation, excessive deductions, and a lack of support after a COVID-19 diagnosis.

The employers implicated by the allegation were labour hire firm MADEC and placement location Sunny Ridge Farms. They put out a statement (p.204) after the first hearing disputing most of the claims put forward by the workers, which has been largely ignored in media coverage. At the second hearing, the Samoan seasonal workers returned, claiming they had been penalised as a result of giving evidence at the initial inquiry. The employers again disputed these claims. The claims and counterclaims on this matter are explored in a brief report put out by the Committee, which reached no conclusion on the matter.

Media coverage of the second hearing focused on the fact, admitted by both sides, that one of the workers made $100 in a week after deductions. These deductions take place for upfront costs, like airfare and cash advance, as well as ongoing costs like accommodation and transport. For the first 10 weeks in the SWP, workers have higher rates of deduction to pay back upfront costs. MADEC described this $100 payment as a ‘safety net’ payment, a floor on payments net of deduction. MADEC has recently raised its guaranteed minimum to $200 a week. The worker in question had average earnings of $394 a week after deductions, a rate 20% higher than agreed upon in their initial contract.

This is not to say deductions are without their problems, and have at times been a source of frustration, exploitation or confusion for workers, and one of the most common sources of worker concern. As we learnt in the Inquiry, most calls to the dedicated 24/7 worker helpline are about payslips and deductions.

The Inquiry also heard from a lawyer, Dana Levitt, involved in a potential class action representing Pacific workers. DFAT stated that they had tried to contact her about claims of exploitation she had alleged at the previous hearing, and in the media five times, so that allegations could be investigated. DFAT stated that “without pay slips, without evidence, without workers, without employers we cannot investigate” and that they had “not received the information requested in order to investigate the cases fully”.

DFAT appeared at both hearings. They stated that proceedings commenced immediately for the workers who gave evidence initially, and their cases were referred to the Fair Work Ombudsman (FWO) for further investigation. DFAT also conducted a surprise audit of the workers’ accommodation and corrected minor issues, such as workers not having access to fans despite fans being available. Five of the workers involved have chosen to move together to a new farm, which is currently being arranged.

The Senate hearings also gave insight into some of the broader compliance measures taken to improve the welfare and wellbeing of Pacific workers in Australia. Increased transparency and public accountability around enforcement measures are important because they show that action is being taken to crack down on dodgy operators, which can give broader confidence that workers are being treated fairly.

DFAT officials stated that 17 agreements with approved employers (AEs) have been cancelled because of audits, which means they can no longer participate in the schemes. The AE mechanism means that dodgy operators can be quickly removed from the scheme without any court proceedings. For the SWP this financial year, 83 in-person compliance checks have taken place, and from those, 18 employers had to take minor actions. 1,143 workers were individually interviewed about their experiences, from 34% of all AEs.

Recent reporting has shone a light on the FWO’s compliance role across both schemes, and its representatives also appeared before the Inquiry. 18 AEs are currently under investigation, 26 compliance and infringement notices have been issued, and $185,000 has been recovered in unpaid entitlements to Pacific workers since 2019.

Greater union involvement is another mechanism through which the specific vulnerabilities of Pacific workers can be addressed. In their Inquiry submission, the Australian Workers Union argued that the SWP/Pacific Labour Scheme (PLS), with their current pastoral care mechanisms and union access, should “form the minimum standards” for all temporary migrant workers.

DFAT gave evidence of upcoming changes to facilitate increased participation of unions, noting that the minimum notice given to union officials before arrival briefings may be increased in revised guidelines. We learnt that the United Workers Union is working with the Samoan government following a warning to Samoan workers to avoid the union.

During COVID-19, over 15,000 worker movements have taken place – some being the same worker multiple times – allowing workers to still earn money during longer stays in Australia. 43 pregnant SWP workers were provided with welfare support by the DFAT-funded Pacific Labour Facility.

Another revelation was that the messaging on an absconding poster was developed with Pacific governments, at their request. This is unsurprising as sending countries themselves see absconding as a growing problem and have imposed their own penalties.

The Senate Inquiry has already released various interim reports, with dissenting notes attached by Coalition senators. One recommendation is to further tighten SWP/PLS protections. Another is to have a national labour hire licensing scheme, which has been previously suggested as a way to level the playing field, and which seems to have bipartisan support.

Whether the Inquiry will have a longer-term impact remains to be seen. The Samoan government has announced a temporary halt on departing flights from April this year to review its involvement in labour mobility. A report just released by the Samoan government argues that many worker complaints are based on misunderstandings, which suggests that better education rather than a moratorium on departures is needed. The Vanuatu government also has set up an inquiry into seasonal work.. It was announced after the first hearing; however, the Vanuatu government has stated that it was not set up in response to the Senate Inquiry, and aims to look at the costs and benefits of labour mobility more broadly.

One of the striking features of the media reporting of the Inquiry was the focus on individual worker claims, even though many were contested, matched by a lack of interest in any data that might be more representative. Recent research surveying seasonal workers has in fact found high levels of worker satisfaction, with 95% of workers expressing a desire to return to Australia. DFAT indicated that (presumably pre-COVID) 74% of SWP participants in any one year return the next to work.

One recommendation we and our colleagues have long made is for an annual survey of both the workers and the employers who participate in SWP and PLS. We are currently planning a survey with the World Bank to gather information from workers in both Australia and New Zealand. Surveys give workers a chance to provide direct feedback by phone, with no involvement of the employer and without fear of retribution.

Individual allegations of worker exploitation are concerning, but strategies to improve worker wellbeing should be based on solid research.