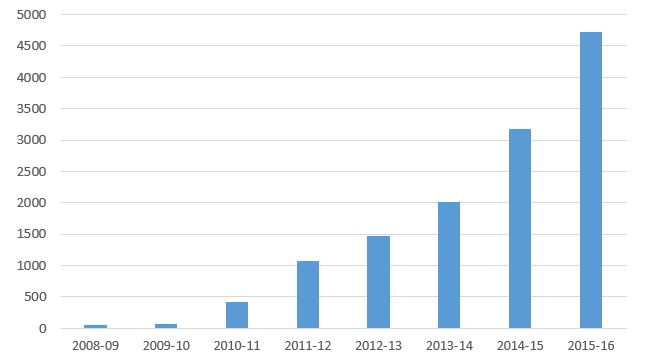 Hidden away in the Department of Employment’s Annual Report for 2015-16 is some very good news about the Seasonal Worker Program (SWP).

Source: Department of Employment Annual Reports (2008-10 was a pilot period)

Whatever regulatory and policy barriers remain, the SWP has clearly carved out a distinct role in addressing labour shortages in horticulture in Australia. Although growth has been much slower than in New Zealand, if the SWP keeps increasing by 1,000 or more a year, it will reach the size of New Zealand’s seasonal work program (the Recognised Seasonal Employer program) by the end of the decade.

There are likely a number of factors behind this rapid growth. Changes to the program in June 2015 included uncapping the program, allowing more countries to join, introducing additional cost-recovery and expanding the program into new industries.

Another factor that may help explain this growth is increased awareness, especially as employers seek out alternatives to backpackers given the confusion surrounding the backpacker tax. Foreign Minister Julie Bishop has been a champion for Pacific labour mobility since the Coalition was elected to office, and now Concetta Fierravanti-Wells, Minister for International Development and the Pacific, has started speaking out in support of the SWP.

Unfortunately, the government no longer seems to be releasing data on SWP participation by nationality. It would be interesting to know where the additional growth is coming from. More generally, the increase in numbers is itself an opportunity for promotion of the SWP.

The 2015-16 rate of growth has certainly exceeded expectations. For example, in our Pacific Possible report, we assumed that the number of seasonal workers would, without further reforms, grow by about 700 a year. But it cannot be assumed that the much greater increments seen in the last two years will continue. Continued promotion is key – and letting the numbers do the talking seems like a good way to do it.

Stephen Howes is Director and Henry Sherrell a Research Officer at the Development Policy Centre.