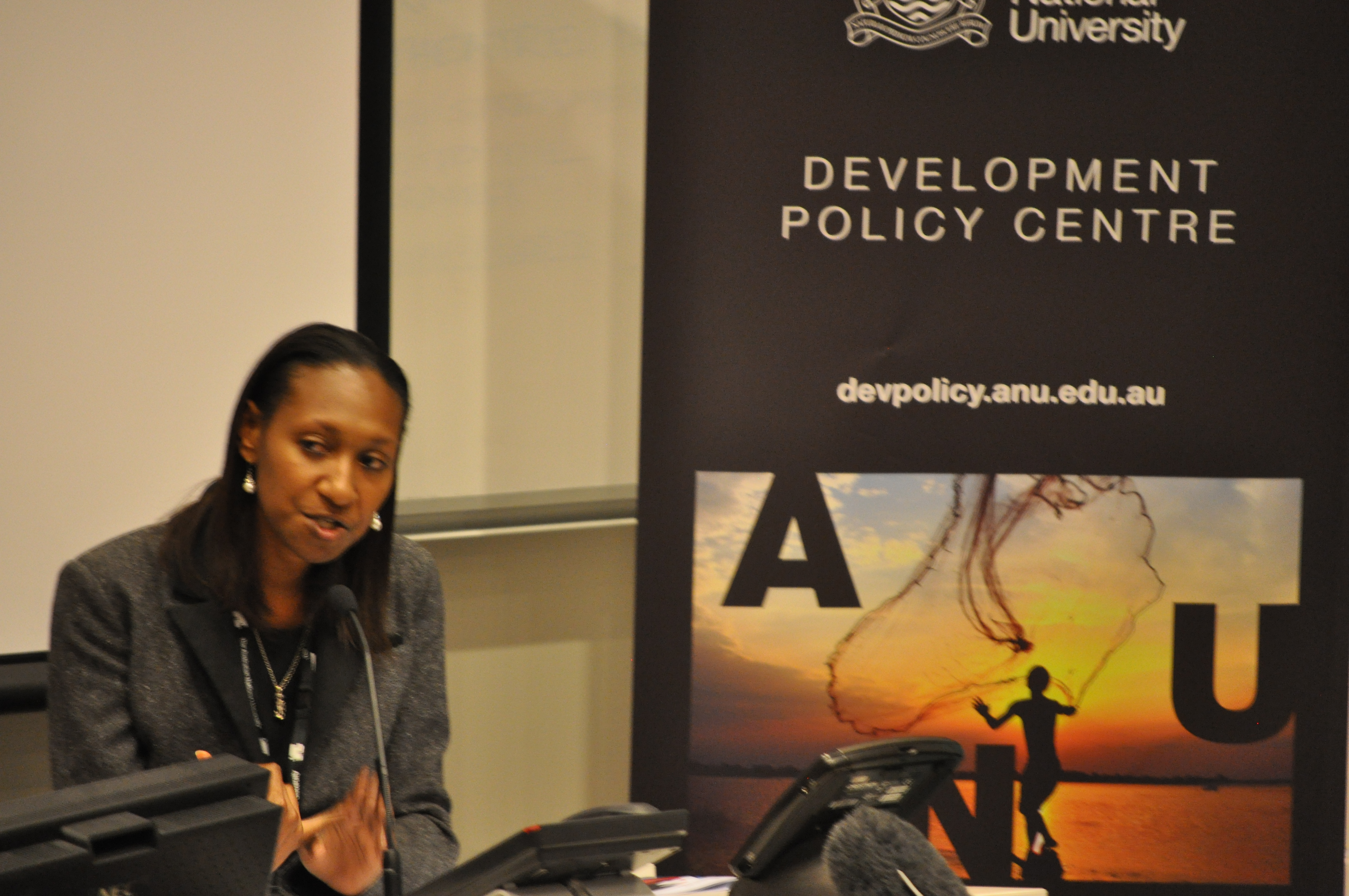 I am Serena Sasingian, Executive Director of The Voice Inc. a youth development organisation based in Port Moresby, Papua New Guinea. We work with young people in educational institutions to build youth leadership for social change.

For thousands of years my people lived in harmony with the environment and each other. There were strong social structures that held the community together. A river, a mountain, dense forests or plains of grassland isolated tribes. This mean that unique communities evolved, each with their own rich customs, traditions and languages. It is from this background that our first generation of nation builders emerged. These were people, like Bart Philemon and Rabbie Namaliu, had to walk for hours to get an education, had to deal with the imposition of a foreign language and embrace values that were different to those of their cultural background.

I can only imagine the challenges that generation went through. A new generation is emerging, the generation of their children (like myself) who have grown up with less confusion, better quality education and technology, like the internet and social media. Sadly this experience accounts for less than 15 percent of our total population. The rest continue to rely on subsistence farming for their livelihood. For them, life has not changed greatly since independence, but we are seeing an erosion of customary social structures and the systems that supported communities for thousands of years.

37 years after independence PNG is still developing as a nation. You will notice I say “developing as a nation” and not “developing nation” to avoid the negative connotations associated with this. I consider growth and development of a nation to be like a child that is eventually fits the clothes they are wearing. We were given democracy, you and I know that democracies work on the premise that there is an educated, engaged and informed population able to elect parliamentarians capable of producing laws and policies that serve the interest of the people. In PNG we have a long way to go before we see that happen. Much of the population are uneducated and they vote according to “big man culture”.

Social indicators show that the incidence of poverty in PNG is increasing and that in recent decades educational outcomes have been falling. Our HDI value for 2011 was 0.466 — in the low human development category — positioning us at 153 out of 187 countries and territories. Between 1980 and 2011, our HDI value increased from 0.313 to 0.466, an increase of 49.0 per cent or an average annual increase of about 1.3 per cent. This still places us at the bottom 20 percent of countries worldwide, and is a major development challenge for our future as the development of our people is key to seeing progress achieved.

Youth are a critical component when we talk about development because PNG has a very young population: 40 percent are under the age of 15. Unfortunately they are entering adulthood amid a range of health and social issues. As Professor Ross Hynes of the University of PNG has pointed out, the socio-cultural setting in which young people operate displays multi-layered value systems including: traditional- customary; Christian; good governance; opportunistic-exploitative; sorcery; and warrior values. Good personal and community decision-making is often compromised by this complexity.

At The Voice Inc., we believe that while there are many structural issues underpinning and contributing to poverty, there are also many ways to address them and respond to them. Many young people do not have a vision for their lives. They live surrounded by violence, poverty, alcohol and drug abuse, purposelessness and idleness. And yet, all people have a purpose in life. Not recognising that causes people to live far below their potential.

A significant factor in the creation and sustainability of positive communities is to give our young people a sense of purpose. We need to be enabling them to realise their potential and their responsibility to use their gifts, talents, passions and dreams to serve the world.

The two most important factors on the social development agenda to ensure a vibrant and dynamic population of active citizens are education and health.

For a country as diverse and complex as PNG, with hundreds of languages and cultures, schools are major can teach values to help shift culture and transform society. According to statistics from the PNG National Statistical Office, over one third of school aged youths have not received any form of formal education, and females are worse off than males. The Department of Education tells us that approximately 80,000 young people leave the school system each year. The formal labor force has been able to absorb less than 10,000. What then becomes of the rest of this vital resource?

With the introduction of the government’s free education policy to ensure that all people receive their basic human right to an education, one must raise the question: is it free education that we are looking for or better quality education that is needed? We have had successful models at the provincial level of government. The national government could learn a lot from Governor Ipatas, who over the last decade has introduced a free education policy. In the 2007 elections he risked losing favor with his voters for changing the policy from “free education” to “quality education” because he saw that the challenge still remained to build school infrastructure. He invested the funds that would have been used to subsidise school fees in building school infrastructure, introducing computer labs and encouraging students to wear school uniforms to restore school pride. This has resulted in Enga Province having some of the highest intake numbers into tertiary institutions in the country.

While that is a success story, the majority of our school infrastructure has deteriorated and tertiary institutions are under-funded and under-staffed. Where will our young men and women be in 20 years’ time? If we cannot produce the next generation of well-educated civil servants, politicians, economists and intellectuals, how can we not regress? Will we have changed, or will we still be locked in a cycle of disappointment and despair?

It is not only access to education that must be given consideration but important components of the curriculum and pedagogy. Individuals can both acquire and employ skills, which will reproduce society, or they can accumulate the skills needed to transform society. We can no longer reproduce the values and structures that have positioned our people on the lowest rankings of governance and other human development indicators.

While there a number of issues to discuss which are pertinent to health, one that is very close to my heart is maternal mortality. How can the beauty of giving birth to life be mired in the reality of so many women dying in the process? PNG’s maternal mortality rates are some of the lowest in the region. According to a health demographic survey, there has been a more than two-fold increase in PNG’s mortality rate from 370 to more than 730 per 100,000 in the past 10 years. Poor maintenance of health facilities has affected the ability to attract and maintain staff and provide high-quality and safe care.

Going forward, our failure to generate any meaningful or sustainable long-term growth may be attributed to a number of factors: geographical, historical, cultural, tribal and institutional.

A well-functioning civil society and politically involved citizenry are the backbone of sustainable development. The government must foster an environment that will allow for an increase in private sector investment and create incentives for entrepreneurs. With a healthy, engaged and active middle class there will be a stronger ability to hold government to account for the inadequacies we are currently experiencing.

Without active and engaged citizens issues of corruption begin to erode service delivery and impede progress in lifting the standard of living for all Papua New Guineans.

At The Voice Inc., we believe young people are leaders in creating the future today. Young people lead by example, they lead by their gifts, talents and skills, we must give them every opportunity they need to lead today.

Serena Sasingian is the Executive Director of The Voice, a youth development organisation based in Port Moresby, Papua New Guinea.

This is an edited version of a presentation Ms Sasingian delivered at Devpolicy’s 2012 Pacific Update at the ANU on September 6, 2012 (video available here). The rest of the series can be found here.

Serena Sumanop is Executive Director of The Voice Inc and a member of the Management Committee of the PNG Family and Sexual Violence Case Management Centre.