The first in our series featuring PhD research.

The modernisation of the agricultural sector can be an important driver of development, decreasing the amount of labour necessary for farming while pushing farmers to relocate in industry. But why would farmers voluntarily renounce their land and look for factory jobs? Since Smith (1776) economists have debated the violence inherent in this type of transition. In my job market paper, Michele Rosenberg and I explore the conflicting nature of the process of agricultural modernisation.

We focus on Brazil where land occupations – the invasion of private land by farmers claiming rights on it – are a widespread phenomenon. In fact, the Brazilian Constitution sanctions that land needs to be productive, implying that unproductive farms are subject to expropriation. Brazil is also characterised by a large amount of land with undefined or unclear ownership and informally accessible to traditional farmers. Since the mid-1990s, the country experienced a strong expansion in land cultivated with soy, a highly capital- and land-intensive crop.

We test the hypothesis that the expansion of capital- and land-intensive agriculture over informally accessible land pushed traditional farmers to exert effort to secure land property titles through land occupations. We find that the growth of soy cultivation increased land occupations by the land-poor and by indigenous peoples in particular. We provide evidence that one potential explanation of this effect is indeed the shrinkage of land accessible to traditional communities. Our results highlight a dynamic of land conflict that might be common also to other developing countries such as Papua New Guinea or Solomon Islands, characterised by the coexistence of an expanding modern agricultural sector and traditional farming.

In the first half of the 1990s, Brazil opened its economy to international markets. In particular, Brazil adopted a set of reforms to attract investments in the agricultural sector in 1995 and 1996, with foreign soy corporations becoming prominent actors. Our empirical strategy relies on the timing of these reforms and the potential gains from adopting capital-intensive technology for soy production. Our main outcome of interest is the incidence of land occupations documented by the Pastoral Land Commission, an organisation linked to the Brazilian Catholic Church. Our final dataset covers more than 5,000 Brazilian municipalities from 1988 to 2014.

Our main result shows that the incidence of land occupation is around 20% higher when the potential yield in soy production increases by around 30% thanks to the adoption of capital-intensive technology. We find support for a causal interpretation of this result: the figure below shows absence of pre-trends in land occupations before 1995 but sizeable and persistent impacts since 1996. 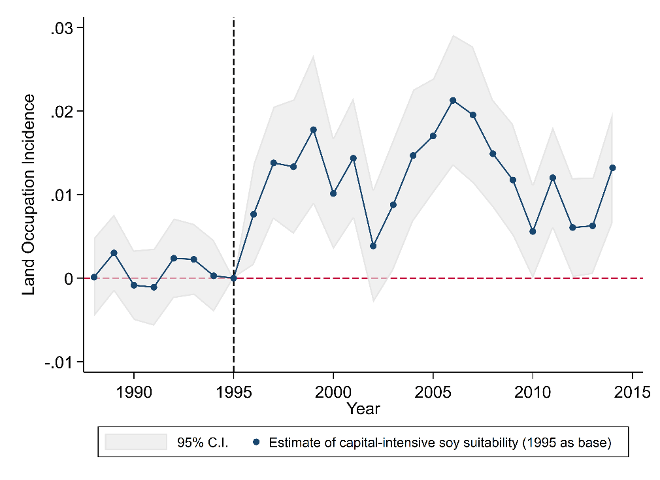 We provide evidence on potential mechanisms through which soy potential gains could have affected land occupations. Two main stories emerge. On the one hand, the possibility that occupiers were attracted by a higher value of land. On the other hand, the idea that traditional farmers were harmed by the soy expansion. We find that soy cultivation expanded, and pastures shrank in municipalities with higher soy potential gains. Since Brazilian pasture is characterised by poor demarcation and weak enforcement of property rights, this result is suggestive evidence of a “new enclosure” phenomenon, with traditional farmers forced out of previously accessible land by expanding soy farms.

We also find a larger effect on land occupations in indigenous lands and by indigenous peoples, who often depend on common land for subsistence. Moreover, municipalities where soy expanded also experienced an increase in land inequality and rural unemployment, further harming traditional farmers. Finally, we find that the effect on land occupations is stronger in recently de-industrialised areas, suggesting that employment opportunities in industry may play a role in mitigating this type of conflict.

Increasing productivity in the agricultural sector is an important way for countries to foster industrialisation and development. Our results suggest that societies may benefit from the implementation of insurance schemes designed to protect “losers” in this type of economic transition. Moreover, we highlight the importance of clearly defining and strongly enforcing property rights over land as a way to reduce rural conflict in countries today facing the challenge of agricultural modernisation.