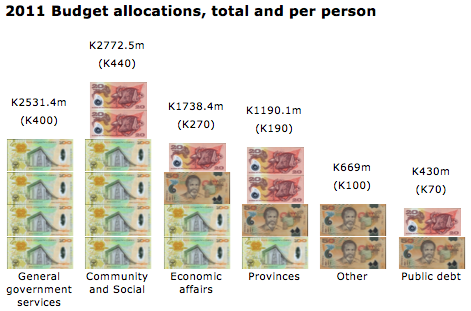 Most Papua New Guinean’s are simply trying to get by: earn a living, pay school fees, get medical care for loved-ones. Many will also be wondering how, or if, their government will deliver critical services to help them along. The 2011 Budget provides some indications.

PNG’s 2011 budget ($3.5 billion) is the country’s biggest yet and is equivalent to about K1500 for each person in PNG. The way that the government has chosen to spend this money is shown in the chart opposite. But what would you spend the money on? And how confident are you that the government will use taxpayers money wisely?

PNG Treasury has now published the full set of documents for the 2010 budget on it’s website. The files are worth exploring, especially Volume 1, which contains lots of interesting analysis. The rest of this article is based on publicly available data from those documents. 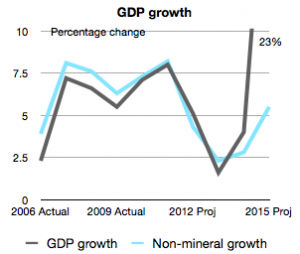 Before looking further at how to spend K1500 per person, let’s take a quick look at the economic growth forecasts.

The good news is that the growth numbers in the budget documents are more or less consistent with the MTDP target of 8.5% p.a. average growth between now and 2015 – making PNG probably the fastest growing economy in the Pacific, on average, over the next five years.

But averages can be deceptive, and this average depends on the LNG project proceeding on schedule and the consequent 23% growth in 2015. Moreover, this growth will only benefit most people indirectly, through a boost to non-mineral GDP and government spending. And while there will be some pick up in non-mineral GDP forecast in 2015, there is very little in the way of LNG tax revenues flowing by 2015.

So from an individuals perspective, it’s probably more relevant to focus on what is happening to non-mineral growth and consider mineral revenues separately.

Turning to the mineral revenues, the picture is more mixed. The government collects revenue from the mineral sector through both taxes and dividends, but both are forecast to fall sharply over the medium term – from about K1.6 billion in 2011 to K356 million in 2015. This is partly a reflection of Treasury’s tendency to be conservative in its forecasts, as noted in a recent blog, with commodity prices for example trending back to their historical average over the medium term, but there are other factors at play.

While it is not clear from the budget documents, it is possible that the financing of the LNG project will impact on receipts, or perhaps Treasury is assuming that the Ok Tedi mine is closing. That might explain why mining and petroleum dividends, which were about K300m this year, disappear in 2013 and 2014. These are issues for Treasury, or perhaps the IPBC, to explain.

Turning to the expenditure side of the budget, it is interesting to compare this year’s budget to the one last year (see chart’s below). All numbers are nominal, but there is a step up in both recurrent spending and the development budget compared to 2010 baseline.

There are two perspectives on the level of spending. One is that spending is too high, and PNG should be running a budget surplus to mitigate the risk of revenue losses later and to deal with capacity constraints. The second view is that with LNG revenues expected to come in 2018, and pressing development constraints, PNG needs to spend more now. Both views have merit. The critical issue though is not whether to save or spend, but how effectively government can spend.

Additional recurrent spending is welcome, given the chronic underfunding of basic services in PNG, for example in education (see below), but it is not clear how much of the increase in recurrent spending is due to the reclassification of items such as road maintenance. Nevertheless, it is a step forward.

Are the extra resources getting to where they are needed? 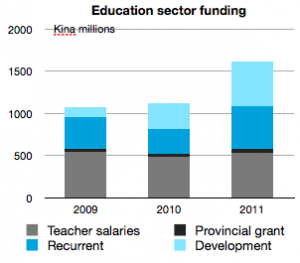 Education is a good sector to start with, because it is a key basic service and accounts for a large proportion of total spending; with over K1.5 billion allocated to the sector, this accounts for over 15% of spending. This covers teacher salaries, recurrent spending (including school fee subsidies), and development spending such as the rehabilitation and construction of classrooms.

The biggest increases were for non-teacher recurrent spending and the Development Budget, while the allocations for teacher salaries and provincial function grants only got a small increase.

Schools also need many more teachers, and the government’s estimate of how much this will cost is shown in the second chart opposite. 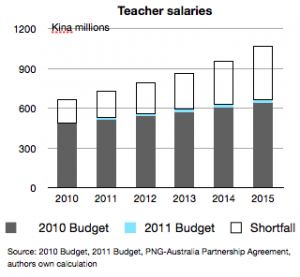 The chart also shows how much funding was allocated to teacher salaries last year (grey bars) and the extra money earmarked in the 2011 budget (light blue bars). While there was more money allocated to teacher salaries, this was only a tiny increase on last year’s allocation an still falls a long way short of what the government has previously estimated that is needed (the unfilled white boxes).

Moreover, if we adjust for inflation, funding for teacher salaries is flat, and lower than in previous years. Based on this analysis, it is not clear where the funding will come from to pay for the extra teachers that the government plans to recruit. Though in the past, Treasury has pulled money out of it’s miscellaneous allocation for pay increases.

School fee subsidies, a topical issue at this time of year, will provide a 11% (real) boost for parents in 2011, but there are no increases thereafter. Given the challenges of service delivery in PNG and sharing mineral wealth, school fee subsidies are arguably the most effective way to indirectly reach the majority of Papua New Guineans. More of the budget could have been allocated to this budget line, and such a policy would be affordable if non-tax (mineral) revenues were brought on budget.

This article could continue will analysis of other sectors. How much funding for road maintenance and primary health services? Do the forward estimates for basic services match with the resources that are needed? What measures are in place to prevent the misuse of funds.

But this is a blog article and not a thesis, and the aim is to highlight some of the details that concerned citizens can be looking for in PNG’s extensive budget documentation. And with K1500 for each person in PNG being spent through the budget, more analysis is in everyone’s interest. So I will conclude with tips for budget watchers who want to do more analysis.

First, while it is tempting to focus on the headline budget numbers for 2011, it is also necessary to focus on allocations over the medium term. These aren’t always easy to find in the budget documents, but teacher salaries and school fee subsidies are the most transparent. Links to the key budget documents are listed below and we’ve converted the key fiscal tables into Excel spreadsheets for anyone who’d like to do more analysis of their own.

Secondly, nominal numbers should be interpreted carefully. There has been a lot on inflation in recent years, so when looking at forward estimates and comparing sector allocations over time, it is also a good idea to adjust for inflation. This enables you to see the purchase power of allocations over time. We’ve included in a scale factor for converting nominal numbers into constant 2010 kina and this is contained in this excel sheet – simply divide the nominal data by the scale factor.

Thirdly, another interesting analysis to carry out is to see how sector spending changes over time as a share of total spending and GDP – here you need to stick to nominal numbers for both the numerator and denominator.

As the PNG government prepares for a $31 billion inflow of LNG revenues over the longer term, it is everybody’s business to check on how the government is managing taxpayers money – starting now with the K1500 for each Papua New Guinean that will be spent this year. Will it deliver the services that you need?

Matthew Morris is a Research Fellow at the Crawford School and Deputy Director of the Development Policy Centre.

If you are interested in doing more budget analysis and would like to advice or guidance, please don’t hesitate to contact the author. We’ll keep the comments section of this article open, so feel free to post your own analysis.

The main tables for the budget are contained in Annex 3 of Volume 1 of the Budget. Our Excel versions of these tables are listed below.