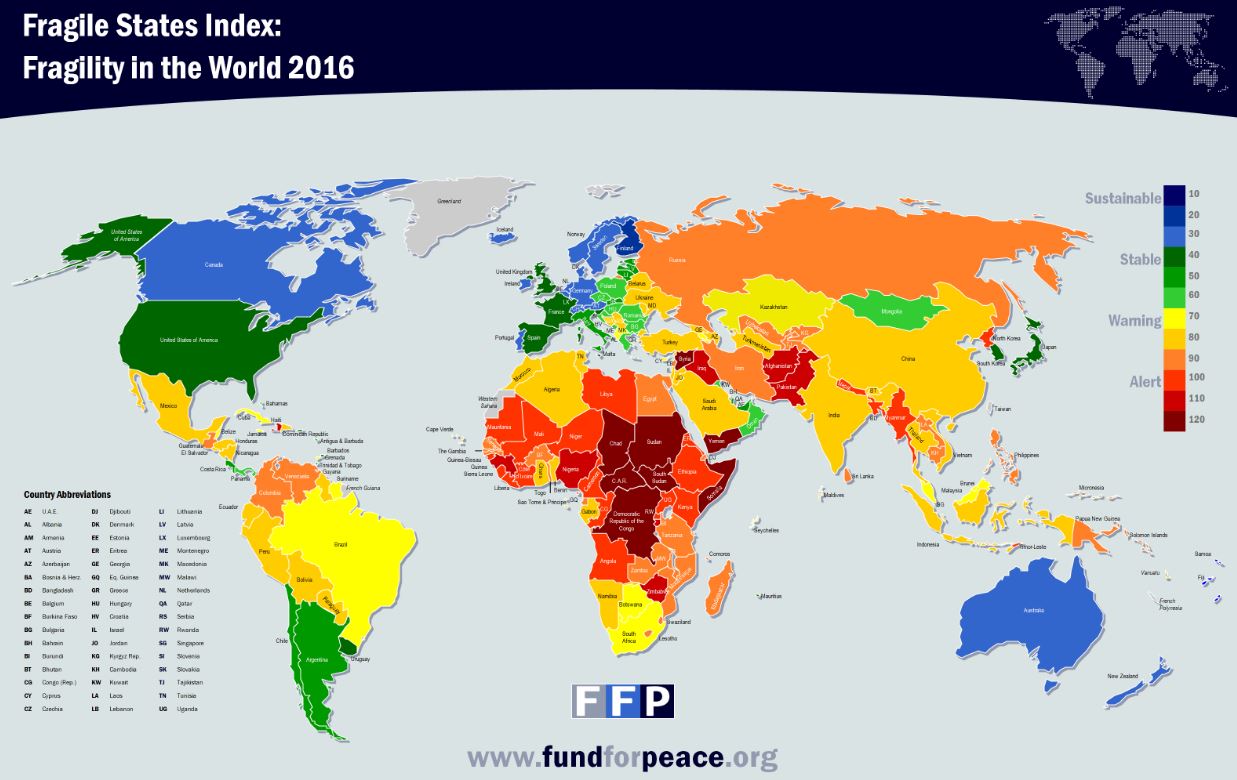 Once a country falls into the fragility trap, it is challenging to escape. These so-called fragile states suffer from multiple points of stress. For instance, they have weak institutions and capacity, and are vulnerable to conflict, or are failing (or at the risk of failing) to deliver the basic functions of the state. Fragile states thus pose a threat not only to their citizens but to world security, as instability is not contained to national boundaries.

The falling of more countries into the fragility trap is concerning. Whatever the origins of fragility in these countries might be, it is imperative to address the associated problems to fix fragile states. But the answer is not straightforward.

Since the Fragile States Index was launched in 2005, the total number of fragile states listed on ‘Alert’ – states which scored 90 or above (a higher score indicates greater instability) – has steadily increased. They rose from 33 in 2006 to 38 in 2016. While ten countries listed on Alert in 2005 made significant improvements by 2016, not only have 23 countries continued to remain on Alert, but 14 new states also fell into the fragility trap.

The success has been mixed. Six countries (Moldova, Cuba, Turkmenistan, Belarus, Seychelles, and Barbados) made significant improvements in the last decade. But the situation in five other countries (Senegal, Yemen, Mali, Syria and Libya) critically worsened. The most improved country in 2016 is Sri Lanka. Economic development and political stability as a result of the conclusion of war helped these improvements. Unlike Sri Lanka, Nigeria became less stable in 2016. The situation in Nigeria worsened because of political instability, the fall of oil prices and the Boko Haram insurgency. Interconnectedness and cross-border pressures have also affected the stability of states. The situation in the Middle East (Yemen, Syria and Libya) critically worsened mainly due to political instability and external intervention.

Colombia, listed on Alert in 2005 with a score of 95, relatively seemed more stable in 2016 with a score of 80. If the peace agreement between the Colombian government and FARC is sustained, the situation in Colombia is likely to improve further. While Colombia and Sri Lanka indicate that the domestic political process has a significant role in reducing state fragility, external factors also have a role. Following the multi-state NATO military intervention in Libya, the situation in Libya critically worsened. It fell into the fragility trap. Libya’s score rose to 84 in 2012 from 69 in 2011. On the other hand, international engagement and the flow of aid helped Afghanistan’s recovery post-2001. The Fragile States Index does not include data before 2005 to allow a comparison, but even today Afghanistan is rated as a fragile state.

There is no a blueprint for fixing state fragility. The effects of these factors largely depend on the context and the interaction between internal and external factors. Domestic political processes, as in the cases of Colombia and Sri Lanka, or foreign intervention in some other cases, as in Yemen and Afghanistan, can have a significant role.

Some countries that have transitioned or are on the path out of fragility can offer some lessons. Local and regional approaches seem to be effective. While national institutions tend to be weak in situations of state fragility, local and regional institutions could be relatively effective and through which the return of political and financial investments tend to be high.

The bottom-up approach is an effective way to intervene at the local level. Because local institutions tend to survive in fragile states, this may help to promote resilience. Building on the cases of Afghanistan, Cambodia, Mozambique, Sierra Leone, Timor-Leste and Uganda, a World Bank study shows that development initiatives which engage local communities and local level governments are often able to have a significant impact. Whether they are able to take states out of the fragility trap remains to be seen. For more substantial improvements, local gains need to be scaled up horizontally and vertically.

Regional and international approaches are another effective way. This approach can especially help to reduce fragility or stagnation mainly in the areas of economy and security. Fragile states, especially if they are landlocked, are dependent on neighbouring countries for trade and transit. Regional initiatives, as Paul Collier argues, that promote and lower trade and transit costs can help these states to recover economically. Equally, regional consensus and cooperation are essential to reduce sources of insecurity outside a fragile state’s territories. If, for example, insurgency in a fragile society is supported by a neighbouring country, an international or regional approach can help to build consensus and contain the insurgency. Afghanistan is a notable example. It is landlocked and has been threatened by the Taliban insurgency. Pakistan has systematically supported and sheltered the Taliban.

These two approaches should not bypass or undermine state institutions at the national level.  Their efficiency can be measured by the degree to which they reinforce the transition out of fragility.

The fixing of state fragility is a lengthy and challenging process. While domestic politics play an important role, a more context-sensitive approach and informed international engagement may help manage the challenges associated with state fragility and may facilitate the transition out of fragility.