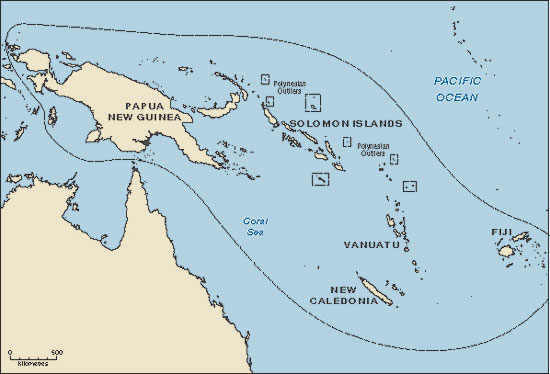 State, Society and Governance in Melanesia

By State Society and Governance in Melanesia Program

This is a guest post by the State Society and Governance in Melanesia Program at the ANU.

The State, Society and Governance in Melanesia Program reflects a growing awareness of the importance to Australia of developments occurring in its nearby region. From its inception SSGM was planned as a dedicated group of scholars with deep knowledge of countries in the region. SSGM scholars are engaged in a program that seeks:

SSGM’s research and outreach focuses on:

Recent publications include the ‘Fiji Review 2010’ by Jon Fraenkel, Light intervention: Lessons from Bougainville by Anthony Regan, and ‘Conflict in Melanesia: Themes and Lessons’ by Sinclair Dinnen and others.

This review by Jon Fraenkel provides valuable insights into political developments in Fiji. Four years after the coup, few would by late 2010 have ruled out the prospect of long-term military rule in Fiji, though impoverished Burma might offer a more plausible parallel than the oil-rich Indonesia of the 1970s. What conflicted with that prospect was the constantly shifting agenda, the ever changing personnel, the sense of drift and continuing disarray and crisis.

2010 had indeed proved a year of ‘deafening silence’ in Fiji: with many steps taken to thoroughly extinguish opposition voices, with no grandiose policy statements from government and with much self-silencing by regime-opponents who understandably saw isolated resistance as futile.

Oddly, given the initial multi-ethnic goals of the coup, the voices of Fiji Indian leaders had been particularly silenced. The coup had become more obviously an ethnic Fijian affair. Young skilled Fiji Indians continued to migrate, leaving an aging and dispirited Indian community behind. Many highly qualified Fijian professionals also left, but the overall demographic balance was changing – with Fijians reaching 58% by 2010 and Fiji Indians down to 36%. Efforts to engineer a military controlled election at some point in the future thus looked likely to rely on a primarily indigenous appeal. But elections seemed far away by the year’s end. Fiji’s elections office had been mothballed, and few in authority talked much any longer about voting system reform.

This book by Anthony Regan analyses the remarkably successful Bougainville peace process, which ended an apparently intractable, violent, and deeply divisive separatist conflict that for much of the period from 1988 to 1997 destabilised both Papua New Guinea and the wider Pacific islands region. International intervention in Bougainville achieved the much-desired light footprint, marked by less activist international involvement and a high degree of control by parties to the process. Anthony Regan contends that the success of this process makes it an important case for examining the advantages and ideal conditions for a light international intervention.

Regan outlines the origins, features, and impacts of the conflict; examines the key dynamics of the peace process that enabled local actors to initiate and largely control it; and focuses on why a light intervention was possible in this case. He also assesses the limitations of this approach. In particular he provides twenty-five lessons highlighting the dynamics contributing to the outcomes in Bougainville and insights and points of reference for those planning interventions in other contexts.

Conflict in Melanesia: Themes and Lessons

This case study by Sinclair Dinnen, Doug Porter and Caroline Sage examines contemporary experiences of conflict in four contexts: Papua New Guinea, with particular reference to the island of Bougainville and the Highlands region; Solomon Islands; and Vanuatu. We find common themes in these experiences, despite the region’s famous socio- linguistic diversity, fragmented geography and varied experience of globalisation. Melanesia offers distinctive lessons about how conflict may be understood, promoted and avoided. The paper is organized in two broad parts.

The first part is contextual. It provides a brief account of conflict and violence in social life before and after colonization. It then tracks, largely chronologically, through the local, national and transnational dimensions of contemporary conflict, how it was avoided, how it has changed, and how it has been managed in different contexts. Particular attention is given to global and regional influences, and to how governments, local people, and external security, development and commercial actors, have worked to mitigate and, at times, exacerbate conflict.

The second part of the case study is more analytical. It steps back from the particulars to address themes and propositions in the overall conceptual framing of WDR 2011 about the nature of conflict, and the underlying stresses and interests that may render it more likely. Part II draws lessons from the histories and contexts discussed in Part 1. We organize these around three themes that reflect views shared with us by people during consultations. The first highlights the need to recognize conflict as an inherent part of social change and thus the need to distinguish between socially generative social contest, and forms of conflict that are corrosive and destructive. The second examines how the way people ‘see’ and understand the world directly shapes systems of regulation and ‘the rules of the game’ and thus directly affect responses to conflict. The third theme argues that capable and legitimate institutions to regulate social contest requires not just capable state institutions, but as much, relationships with local and international agents and organizations operating below and above the state.

However, as this book shows, agriculture feeds most Papua New Guineans, houses them, provides a significant amount of food to townspeople and earns a significant amount of foreign exchange. By doing these things, agriculture provides PNG with a social, economic and political stability which has meant that, despite sometimes poor economic management, the country has been able to weather a number of economic and political crises. Furthermore, agriculture will continue in this role, long after all the minerals and oil have been dug up and exported.

The primary purpose of this book is to demonstrate how important agriculture is to PNG and to provide the knowledge that will enable policy makers to make sensible plans for it, within the PNG economy. For a developing country, PNG is rich in information for planning, but most of it is not easily accessible to those who need it. This book was initially conceived to bring this ‘lost’ information on PNG agriculture together in a single publication where it would be easy to access. It began as a compendium of statistics but has evolved into a comprehensive book of 72 sections on PNG agriculture and related topics. The number of sections alone demonstrates how agricul- ture pervades almost every aspect of life in PNG.

The disciplinary backgrounds of SSGM staff, students and visiting fellows include development studies, politics, geography, anthropology, history, economics, and law. Many have lived, worked and researched in the Pacific for long periods of time — undertaking fieldwork, teaching in universities and research institutes, and working for and advising governments, donor agencies and NGOs. Through such experience, SSGM scholars have deep and sensitive understandings of the factors critical to successful development and governance in Melanesia. Their expertise, so far, has covered decentralisation policy; law and justice policy; restorative justice; constitution-making processes and constitutional design and implementation in post-conflict situations; electoral systems in small states; conflict resolution processes in relation to intra-state conflict; the HIV epidemic; gender-based violence; and state-building. SSGM staff are acknowledged experts on major ‘hot-spots’ of tension and conflict in Melanesia, such as Bougainville, Southern Highlands, the Solomon Islands and Fiji.

SSGM enjoys close working relationships with many of the region’s research institutions and makes a valuable contribution to strengthening the research capacity of Pacific Island scholars and institutions. SSGM also enjoys close working relationships with donor agencies, NGOs and government. Since its inception, SSGM has received support from the Australian Government and currently receives substantial funding from AusAID.