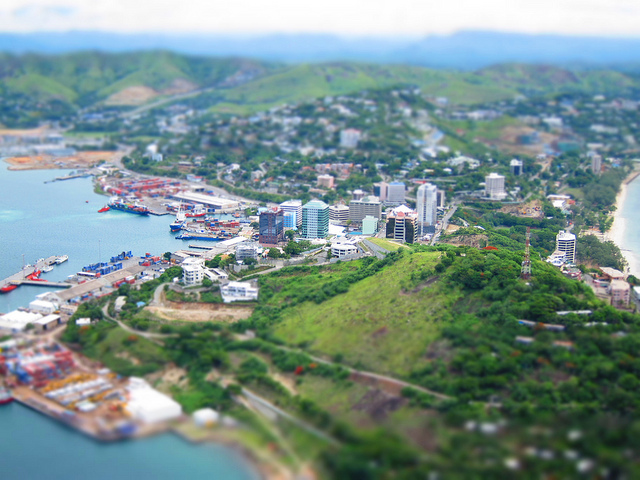 I remember being in Port Moresby as a young adult. I remember as we would drive up the road to our apartment, the tin cans on the road waiting to get crushed by passing car tyres and taken to recycling, the mothers with their kids who would smile and wave, the bright white smiles, and the bright betelnut-red ones, all while fit bare-chested runners, children and adults played sport in every corner of free land; rugby, running, and volleyball (…but mostly rugby).

I remember walking through the now defunct Anderson’s supermarket and getting interrupted by the shelf-stacker with the big grin stacking canned peaches who, in the middle of the supermarket, sang at the top of his voice, “I don’t like cricket! I love it!” as the refrain from the reggae hit Dreadlock Holiday came on the supermarket radio. I could imagine going in to a bar in town, perhaps like the country tavern from the Blues Brothers, and find that yes, they have both kinds of music, island and reggae.

I remember the warm and moist PNG heat, contrasting with the crisp cold as you walk in to an air-conditioned building. The exuberance in the smiles of children, and the grit and humour in the smiles those a bit older. And I remember that the only complaint you could have about jumping into the water on a hot day was that the water was too warm.

I remember the uproarious cries of a crowd laughing with a joyous abandon, an incredibly special type of laughter that is only ever matched in the West at a Hi-5 concert (and is somehow kicked out of children in the West after the age of 5). All this combined with musical and movement skills that put crowds in the West to shame.

I knew that our apartment had floor-to-ceiling bars on the balcony, which was to stop people getting in, and despite the world-class harbour view behind it, from the outside looked a bit too similar to a cage for comfort. And I’d been to the briefing that the security firms seem to do for many foreigners when they come to PNG for the first time, where they highlighted the dangers of living in Port Moresby: violence, pickpockets, raskols, corruption and carjackings, to name a few.

At the time, however, I never felt like I was in real danger, despite these risks. For example, I remember going to a certain market notorious for pickpockets, and then being so smug and laughing as I foiled a pickpocket attempt by making sure I had empty pockets to start with.

While I would not want to downplay the risks, the threat of criminal acts in Moresby, while ever-present, tend to be opportunistic as opposed to premeditated. Horrific things have happened and surely will continue to happen, and at a rate far greater than the rate that similar things occur in the West, mostly to locals, but to foreigners too.

Unfortunately, it is these horrific stories that international newspapers tend to latch on to most. But to assume that this is what all of Papua New Guinea is like would be an inexpressible disservice to the country as a whole.

In what must be my favourite TED talk, Nigerian author Chimamanda Ngozi warns us about the dangers of a “single story”. It should be, perhaps, the danger of only knowing a single story. Because, she argues, “A single story creates stereotypes, and the problem with stereotypes is not that they are untrue, but that they are incomplete. They make one story become the only story.”

In a similar way, the reality of life for people living in places like Port Moresby is vastly different from the reality depicted in foreign newspapers. No doubt as a child of a foreign advisor, I was just another a rich outsider, and was mostly shielded from many of the realities of life in Moresby, so there are many things I would not have experienced. That said, my story does have some common elements with those of a small but ever growing cohort of middle-class PNG citizens.

So, consider this blog post a challenge both to those in PNG and those outside PNG.

For those outside, don’t be so dazzled by stories of corruption, danger and fear, that you miss the equally real, beautiful and complex reality: the intelligent women and gracious men, exuberant youth, savvy entrepreneurs and hard-working public servants all striving to make Port Moresby and PNG a better place.

For those in PNG, a simple idea, don’t let your stories go untold. Start writing, maybe a blog, or listen to the stories of those who cannot write and write for them. The stories don’t necessarily have to be positive, but they should come from the heart. There is value in humbleness and humility, but don’t let this constrain you from talking about and writing about your experiences. In this way we can overpower the “single story” many have of Moresby and PNG.

More stories deserve to be and need to be told.

Rohan Fox lived in Port Moresby with his parents and two brothers in 2007, which this blog is about. He returned in 2015 and 2016 as a lecturer in economics at the University of Papua New Guinea and now works in Canberra as a Research Officer at the Development Policy Centre.