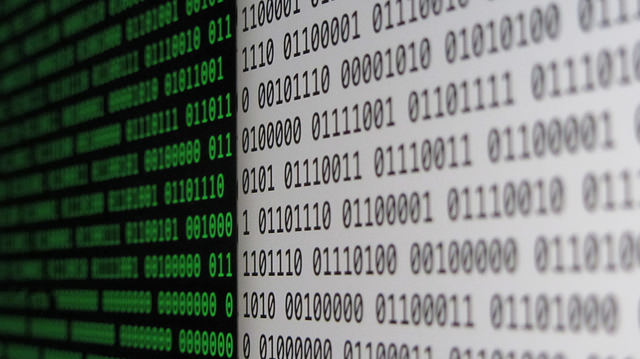 As part of the Pacific Conversations series, Amanda Watson recently visited the office of the National Information and Communications Technology Authority of Papua New Guinea (NICTA) in Port Moresby. She met with three of the organisation’s senior managers to find out the latest developments in the telecommunication and broadcasting sectors in Papua New Guinea (PNG). The discussion is summarised below. At times, more than one NICTA manager answered Amanda’s question so, for simplicity, responses are not attributed to individuals. 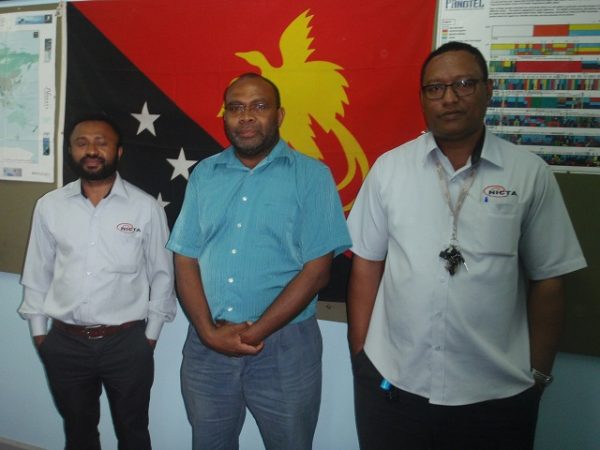 Hans Adeg, Gibson Tito and Kila Aluvula at their workplace in Port Moresby

Question: As I understand it, NICTA’s role is as an independent authority to regulate the Information and Communication Technology (ICT) space in PNG. You don’t get any funding from the PNG government?

Response: We operate with what we generate from spectrum fees and licence fees. That’s why we don’t have any influence from outside when it comes to regulating the industry.

What about NICTA’s involvement in international forums? 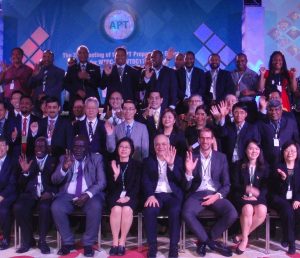 Delegates at an Asia-Pacific meeting, hosted by NICTA in Port Moresby in February 2017

We do play a role in the international arena, particularly through representing the country’s interests and the industry as well. We’ve been participating in various meetings of the International Telecommunication Union (ITU), and the Asia-Pacific Telecommunity (APT) – that’s the regional group. Our CEO is the chair of the Pacific ICT Regulatory Resource Centre in Fiji.

We just concluded hosting an APT meeting. We had a lot of participants from Asia and the Pacific. So, in terms of our participation in the international arena, NICTA is quite active.

Turning now to convergence of different technologies into single devices, what kind of issues does this present to NICTA?

One of the big issues we’ve been talking about is ‘over-the-top’ applications – anything that uses the infrastructure and Internet protocol to provide a service. That includes broadcasting over the Internet, competing with TV and radio stations, and also ‘Voice-over-Internet-Protocol’ or ‘VOIP’ in short, such as Skype. So we are mindful of that and may have to come up with some kind of regulation to ensure we protect our operators. We don’t want to be stopping progress but we do have to have something in place so everyone is happy. It’s a hot topic around the globe too, regulating ‘over-the-top’ services – it’s quite a challenging issue.

We’re getting onto the Internet now, so what’s NICTA’s role in relation to the cybercrime policy?

The policy was passed last year and it was recently signed off by the Governor General. Our challenge now is actually enforcing the policy. We understand there’s a lack of expertise, especially in our law enforcement agencies, to address cybercrime issues. So that’s something that we’ve been discussing with the ITU, in terms of capacity building for our law enforcement agencies.

The way Internet traffic works at the moment is that if someone has, say, a Datec service and a Datec email address and they want to email someone or look up a website hosted by a different internet service provider (ISP), their request goes all the way to the United States or somewhere and comes all the way back. An Internet Exchange Point (IXP) within PNG would mean that traffic between providers does not need to leave the country. So this would greatly increase the speed of the Internet, because there’s such limited bandwidth going outside the country. Is there any update on establishing an IXP?

We are working in conjunction with the Internet Society (ISOC). There’s a room we recently built, at the back of the building, and that’s where we house the neutral IXP. And just a couple of weeks ago, we had all the ISPs in the room. Most of them are being cooperative at the moment. Our objective is lowering the costs of Internet by keeping the traffic local.

We are trying to discourage traffic from going externally if you’re trying to just email within. Obviously it will improve the efficiency and effectiveness of the Internet. NICTA is initiating this process but in the long-term we would like to have ownership by the ISPs. Most of the ISPs were saying, look, let’s get a neutral body, when we were choosing the location. So, there were a couple of suggestions, but everyone agreed ‘let’s put it at NICTA’.

Can we turn to broadcast media? You’re working on the changeover from analogue to digital TV services. Would you mind giving a quick update on that?

At this point in time, Digicel is providing a digital pay TV service. Our focus is on the free-to-air broadcasters EMTV, NBC and 3ABN. We would like them to go digital, using a particular spectrum standard, and at this stage the migration is running very slowly. We’ve set a deadline for March 2018 but one of the major challenges is funding the transition.

Does NICTA have a role in relation to cross-media ownership?

We’ve got a watchdog, the ICCC, which looks at competition issues. And they also seek NICTA’s advice on some of those issues.

Turning now to mobile phones, is there a level playing field at present in the mobile telecommunications space in PNG?

What we’ve been seeing is that the government-owned entities are not making the most of the opportunity that’s available, like committing funds and expediting projects that they’re supposed to be rolling out in the country. Unlike Digicel, which is a privately-owned company where they make decisions, commit funds and rollout aggressively. And of course when they start rolling out networks and reach out to as many subscribers as possible, they need spectrum. We have no reason to say ‘no’. We have to allocate spectrum.

Telikom PNG is currently starting up their digital service, to replace their previous CDMA Citifon service. Presumably they had to get a new licence?

We don’t give technology-specific licences. Operator licences are technology neutral. Their previous spectrum allocation that was used for CDMA, they’re now using it for a 3G network, which they’re rolling out in parallel with a 4G network. So they will not be getting a new licence, but when they’re trying to expand their service, they would come to us to request for more spectrum.

I believe you had submissions closing recently about number portability (the ability of a consumer to keep the same phone number when changing to a different telecommunication company).

The industry requested number portability. Given that it’s new to the country, we have to go through a public consultation process. NICTA’s role is basically facilitating and then it will go back to the industry to decide. Also, it comes at a cost, which the operators are going to carry.

Mobile phone sim card (phone number) registration is something you have been working on.

The regulation was gazetted on April 23rd last year. Then we gave the operators three months to get their in-house ready. From July 23rd, operators were given 18 months to register sim cards.

So does that mean, Uncle John in the village, if he doesn’t have his sim card registered by January 23rd 2018, his phone will be turned off on that day?

That’s as per the regulation.  But identification is the most common issue that the operators are facing. We’ve had some discussion with them on how best we could address this problem.

I bought a new sim card yesterday because I’d had a phone stolen. And they didn’t ask for my name. Even when I mentioned sim card registration, they said ‘no’.

Look, although we had all these dates there, in terms of when people should register and when they would be dropped out of service, we were also very mindful of the operators’ preparedness in ensuring that the exercise is conducted effectively.

Everywhere you go in Australia and other countries, you need to provide some kind of identification. We’re trying to get everybody registered in line with cyber security. So it’s time that we start getting tough on them [the operators], telling them this needs to be done.

If you look at this regulation, there are severe fines for disclosing information on the database.

And do you know of any warrants that have been issued by the police so far to see details in any of the databases?

The Universal Access and Service (UAS) initiative aims to extend ICT access to locations where operators would not otherwise go, and near neighbour Vanuatu has a similar scheme. From the UAS 2017 project report, it said that the UAS has already funded some expansion of mobile network coverage in PNG. Is that correct?

Yes. The selection of sites was done in consultation with the UAS secretariat. They [operators] don’t deploy sites to locations where it’s economically feasible to them, but in line with our interest.

The UAS documentation mentions 3G upgrade by Telikom and Digicel. So that’s current and ongoing through the UAS as I understand it.

Yes. Contracts were given to Digicel and Telikom. bmobile Vodafone was not on that bid.

The other UAS plan, ‘Connect the Schools’, looks very ambitious.

That is not going ahead as there was no appropriate bidder. But we have a separate project providing ICT services to teachers’ colleges around the country. That is funded by NICTA.

Amanda H A Watson is a Lecturer in Public Policy at UPNG, based in Port Moresby under the UPNG-ANU partnership. Hans Adeg, Kila Aluvula and Gibson Tito are senior managers at NICTA. All three completed a degree in communication engineering at the PNG University of Technology (Unitech) in Lae. Hans Adeg is the Manager Resource Planning. He joined NICTA in 2012 as an inspector and later held the position of Principal Engineer Spectrum Planning. Prior to joining NICTA, he worked with bmobile and Digicel. Kila Aluvula joined NICTA as a graduate in the broadcasting division and held positions there before becoming the Manager Special Projects. Gibson Tito has been the Manager Licensing and Business Relations for five years. Prior to joining NICTA, he was a lecturer at Unitech. When he first joined NICTA, he worked in the standards area.

Hans Adeg is the Manager Resource Planning for the National Information and Communications Technology Authority of Papua New Guinea (NICTA). He joined NICTA in 2012 as an inspector and later held the position of Principal Engineer Spectrum Planning. Prior to joining NICTA, he worked with bmobile and Digicel. He has a degree in communication engineering from the PNG University of Technology (Unitech).

Kila Aluvula joined the National Information and Communications Technology Authority of Papua New Guinea (NICTA) as a graduate in the broadcasting division and held positions there before becoming the Manager Special Projects. He has a degree in communication engineering from the PNG University of Technology (Unitech).

Gibson Tito has been the Manager Licensing and Business Relations at the National Information and Communications Technology Authority of Papua New Guinea (NICTA) for five years. Prior to joining NICTA, he was a lecturer at Unitech. When he first joined NICTA, he worked in the standards area. He has a degree in communication engineering from the PNG University of Technology (Unitech).