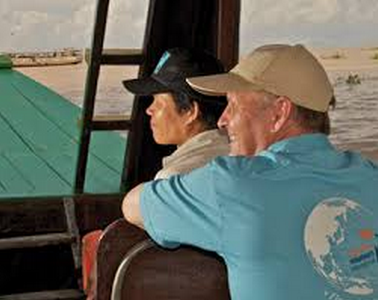 In my first post on the recent Office of Development Effectiveness (ODE) evaluation of Australia’s volunteer program, I criticised that report’s central recommendation that the program should focus more on capacity development as narrowly conceived and poorly argued.

The recommendation is also undermined by what I think is the most interesting finding in the report. This is that there are more volunteers in in-line positions than any other type. The table below is an extract of the report’s Table 10. It is the result of an in-depth analysis by the evaluation team of a small number of representative volunteer positions to judge what role volunteers actually play in the course of their assignment. 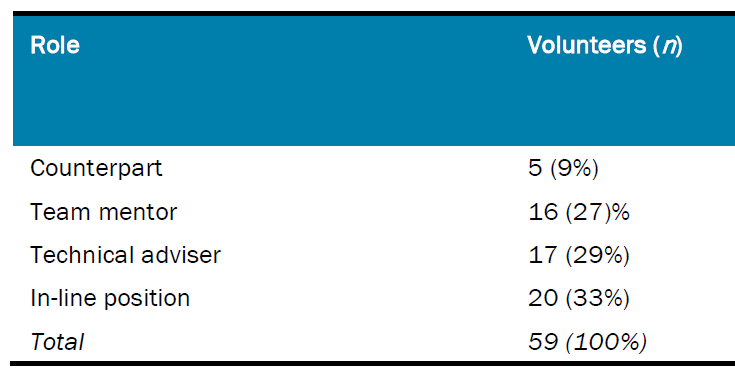 I have been advocating for years that Australia’s aid program should make more use of in-line positions. So I was both surprised and delighted to find that it already is at least with regard to volunteers. Refocusing the volunteer program on capacity development clearly doesn’t make sense for the one-third of volunteers who are in line (and there is no suggestion from the report that in-line volunteering should be done away with). Capacity development can be one role played by in-line volunteers, but it clearly isn’t going to be the main game for them.

Another implication of the table is that the counterpart model which underlies the volunteer program should go. As this table shows, only (about) 9% of volunteers actually work in a counterpart role. Despite this, the evaluation concludes that having a default expectation that a volunteer will play “the role of a counterpart” is “both feasible and desirable” (p.62). But it is only 9%. If that is your default, you’ll be disappointed nine times out of ten.

Contradicting this conclusion, but to the evaluation’s credit, Recommendation 5 includes the suggestion that the volunteering program broaden the approach to capacity development beyond the counterpart model. However, it still wants to talk about “different approaches to capacity development” rather than recognising that, especially with in-line positions, this might not be the goal at all.

More plans are the last thing we need. We know from the evaluation that half the single-assignment plans currently required are not followed through on. Multiple-assignment plans will be even less relevant. I would much rather suggest that there be a process for working out which assignments went well and replicating those assignments that succeed: in other words, build on success, not plans.

I mentioned that the evaluation doesn’t reference the 2013 virtual discussion of volunteering on the Devpolicy Blog. If it had, it would have been alerted to doubts that the capacity development model was an appropriate one for volunteering positions.

As I wrote, as part of my contribution to that debate, and in relation to the youth volunteer program, AYAD, back in May 2013:

The AYAD objective is actually very well and simply expressed. AYAD “aims to strengthen mutual understanding between Australia and the countries of Asia, the Pacific and Africa and make a positive contribution to development.”

The problem comes in not at this level, but by then insisting that the contribution to development be through capacity building (as AYAD does, prominently, on its home page). Some young volunteers, and more older ones, might be able to make their contribution in this way. But all can realistically aim to make a positive contribution to development one way or another. Delinking the volunteer program from a capacity building straitjacket (for example, by not requiring the assignment of a counterpart) would enable a much more flexible approach to be taken, with more emphasis on what usefully the volunteer can do while in country, and greater likelihood of positive results.

For the ODE volunteering evaluation then to be released some eight months later, and for it to completely ignore any such contrary views, and to argue that the capacity development role of the volunteer program should be not only maintained but in fact strengthened is disappointing, especially when the evaluation’s argument is poorly made, and is contradicted by its own data.

This is the second in a three part series based on Stephen’s presentation at Devpolicy’s recent ODE evaluations forum. Robin Davies’ analysis of the Lessons from Australian Aid report can be found here.