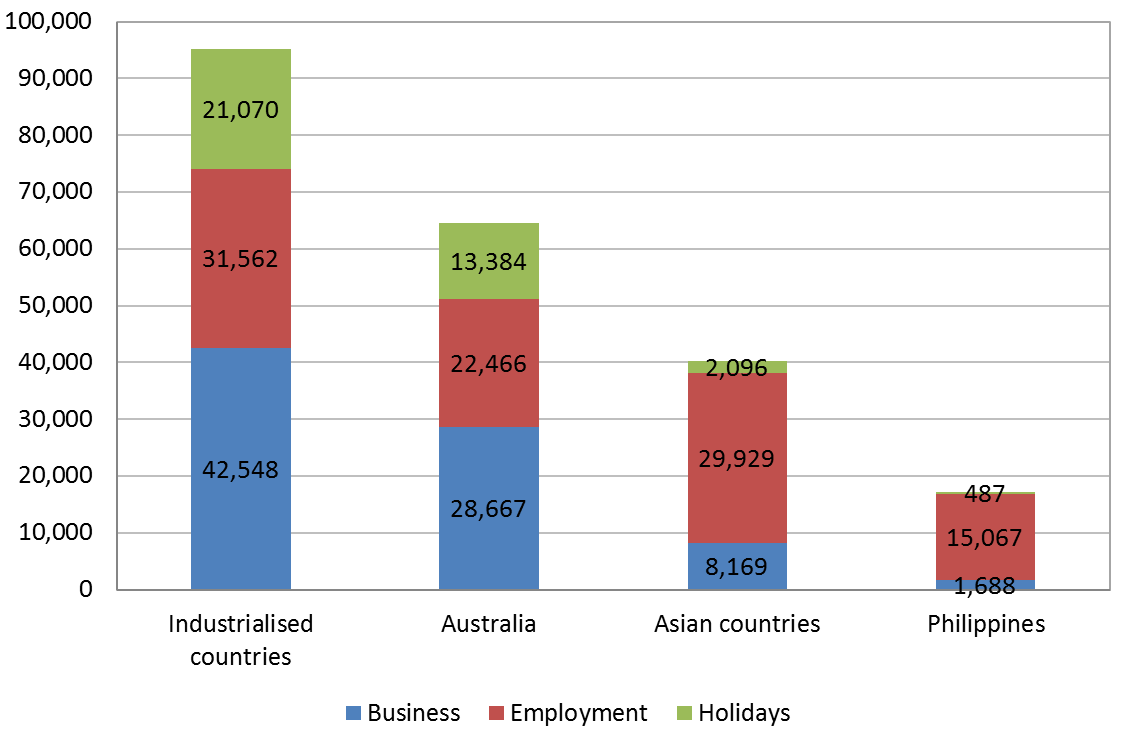 This is the fourth in a series of posts analysing arrival and departure data in Papua New Guinea.

So far, we have seen that the number of arrivals to PNG has increased enormously over the last decade, on account of the country’s economic boom. Australia has remained the predominant source country of visitors to PNG, contributing about half of all visitors, but Asia has been the fastest growing source region, with the number of visitors from the Philippines increasing particularly rapidly. In this post, I will show that different factors are driving growth from different source regions.

The main reason for visitor arrivals from industrialised countries is business: 40% of visitors from industrialised countries went to PNG for business reasons. In contrast, the main reason for visitors arriving from Asian countries is employment (69.6%). As many as 82.3% of Filipinos went for employment reasons. From all countries in the world, the Philippines has the largest percentage of employment-related visitor arrivals to PNG, followed by the Indian subcontinent (76.5%). Since many visitors from Asia arrive for employment, they usually stay in PNG for longer periods of time compared to the business arrivals, who tend to stay for short periods of time.

Figure 2: number of visitors for employment from Australia and the Philippines 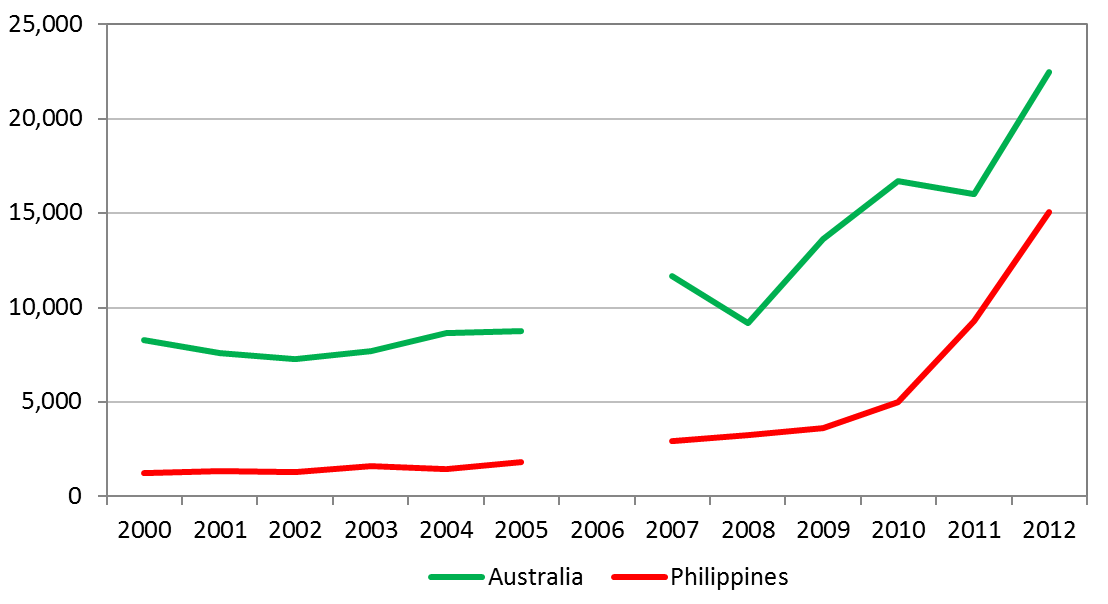 Note: Data on the number of visitors by country of residence and reason is incomplete for 2006.

Tables 1 and 2 in the Annex to this post provide detailed information on visitor arrivals by country of residence and reason for the years 2000 and 2012 respectively. Only countries that contributed more than 1% of visitor arrivals are included in the tables. In 2000 and 2012, the largest number of visitors for each reason came from Australia, except for visitors arriving for education purposes, where the highest number came from Oceania in both years.

Bear in mind that this increase in the sourcing of workers from developing countries is occurring in a context in which foreign workers have become much more important in PNG. As I showed in my second post in this series, between 1996 and 2013 the number of workers in the formal employment sector in PNG increased by about 1.5 times to 340,000. The number of foreign visitors increased 2.7 times to 168,000, but the number of visitors for employment increased 5.3 times to 70,000. Even allowing for some suspected underestimation of the formal workforce numbers in recent years, these numbers clearly suggest that PNG is relying more heavily on overseas workers. The ratio of visitors for employment to total formal employment increased from 6% in 1996 to 21% in 2013. Presumably, a key attraction of developing-country workers is that they cost less to hire than their industrialised-country counterparts. To this extent, greater reliance on them has driven the turn towards greater reliance on foreign employment. It is also a credit to PNG’s foreign work permit system that it has been able to facilitate this rapid growth. 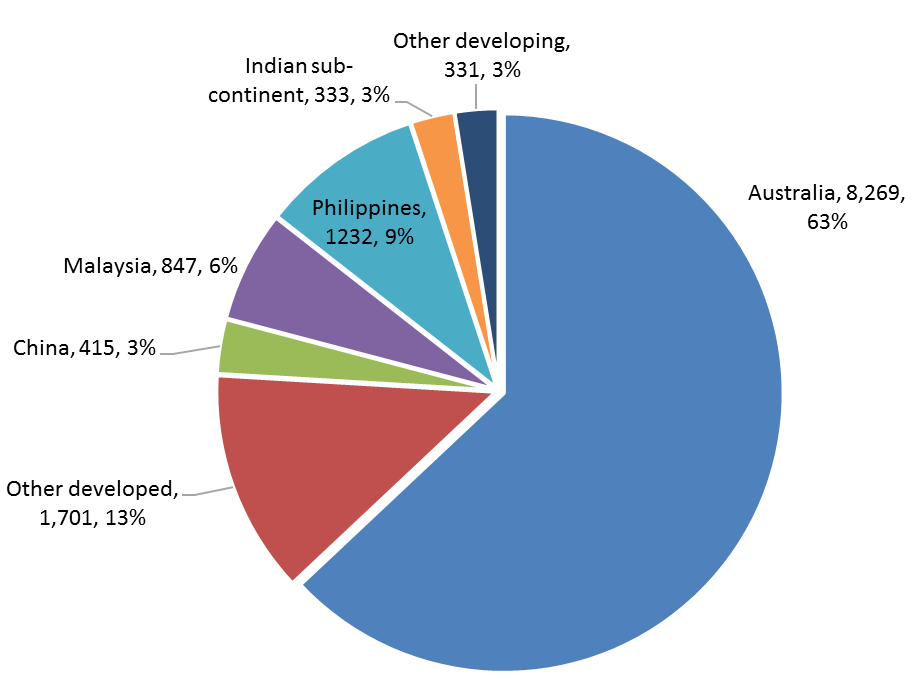 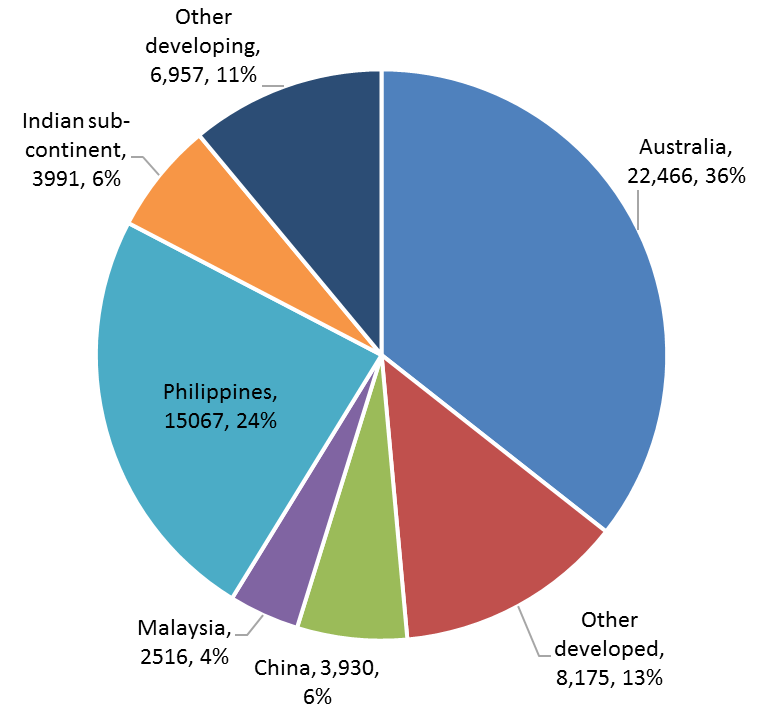 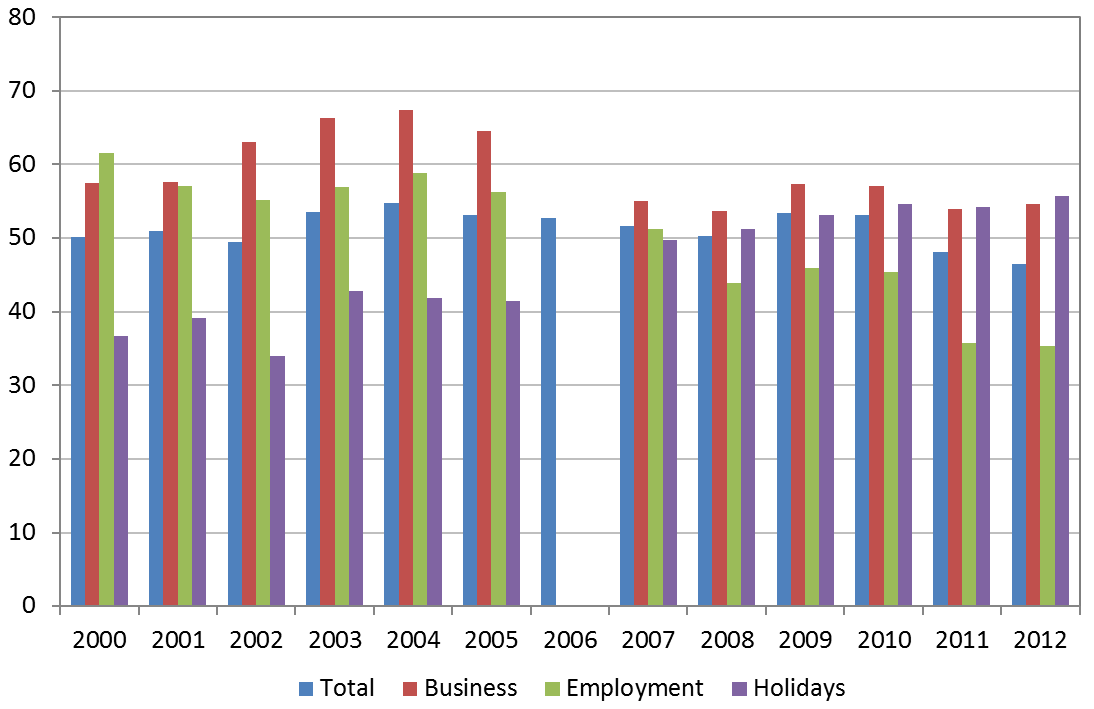 Note: Data on the number of visitors by country of residence and reason is incomplete for 2006.

In sum, the increasing number of Asian visitors, and especially Filipinos, to PNG for employment purposes since 1999 has been an important development. It is directly linked to PNG’s expanding economy, and shows that Filipinos in particular, as well as Asians more generally, have been successful in accessing increased employment opportunities associated with this expansion. Equally striking is the diversification of the foreign workforce, though not of foreign business people, away from its former domination by Australia. Australians continue to dominate arrivals for business and holiday purposes, contributing more than half of the visitors in each category. Australia’s growing domination of the holiday market has roughly offset its falling importance in the foreign worker category, which explains why Australia’s overall share in foreign arrivals is roughly constant, as my previous post showed.

Annex: Table 1: visitor arrivals by reason and country of residence, 2000 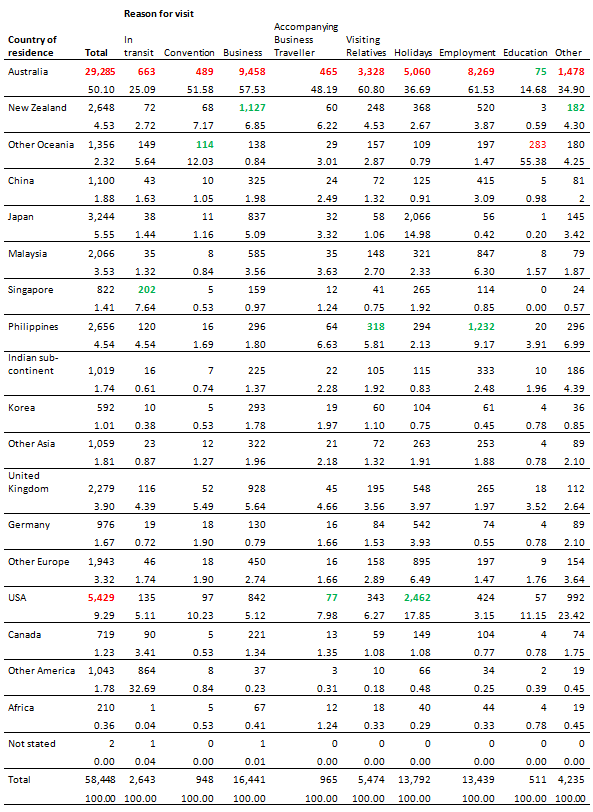 Table 2: visitor arrivals by reason and country of residence, 2012 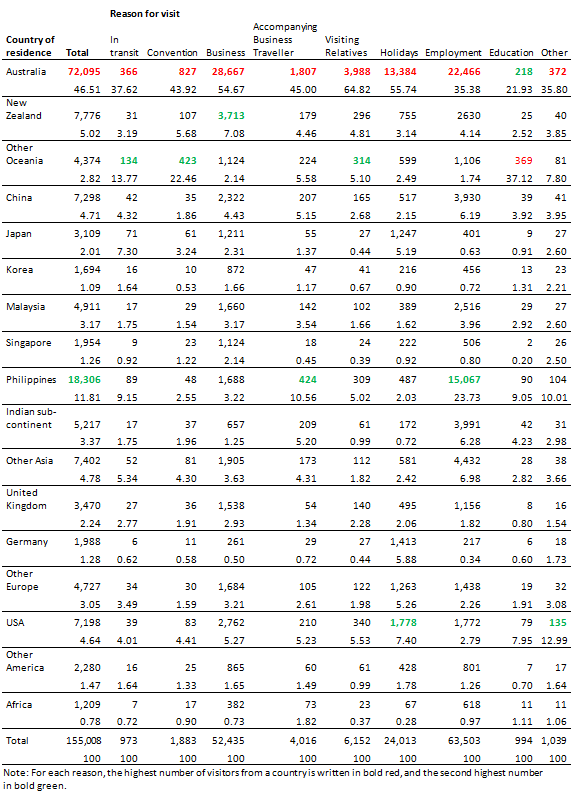